‘I love Ireland, my life here is calm, but sometimes it is very hard’

New to the Parish: Krzysiek and Iwa Wisniewski arrived from Poland in 2006 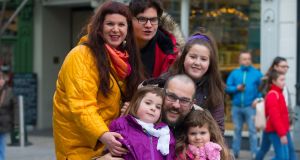 The first time Krzysiek Wisniewski came to Ireland, he hitch-hiked from Poland, Germany, Holland and finally England to reach the country. He was studying English language and culture at university in Warsaw and had decided to focus on the Northern Irish troubles for his thesis. He arrived in Ireland in 1998, only a few months before the signing of the Belfast Agreement, and travelled to Belfast, where he spent five days staying in a tent while he researched the conflict.

“I had been buying books off Amazon but need more information so I came here for material. I was amazed by how friendly the people were and I loved the atmosphere. I finished my thesis just before the agreement was signed so my last chapter was about the talks. I didn’t know the outcome before I submitted it.”

Krzysiek is sitting in his home in Waterford as he describes his first visit to this country 20 years ago. Beside him sits his wife, Iwa, who joined him on his second visit, when the couple came here on their honeymoon in May 2006. They rented a car and spent a couple of weeks driving around the country, from the Giant’s Causeway to Sligo, Westport, Galway and Waterford. Unaware of the recent influx of eastern Europeans moving to Ireland for work, they were surprised to encounter a number of Poles along their journey.

“We spent a night in a hostel in Connemara and when we booked the room the owner asked if we were looking for a job. We said we were on holidays and he was so surprised we weren’t looking for work.”

Shortly after they returned to Poland, Krzysiek’s sister moved to Ireland for her summer break from college and found a job in Waterford. She mentioned to her brother that she’d noticed some local newspapers in the area so he posted over a CV of his work experience.

“I was happy with my life. I had a good job as a translator with a small newspaper and I didn’t want to move. But I decided to contact the Irish papers and offer to write them something about Poland and Polish people.”

A few days later he was contacted by one of the papers and asked to write a feature about Poles living in Waterford. He returned to Ireland to write the piece and then flew back to Warsaw. A few days later, the editor got in touch to say he’d like to read more of his work. By September, the newlyweds had packed up their lives and had moved to Waterford with Iwa’s six-year-old son Franek.

“The plan was to stay here for five years,” says Iwa, who was pregnant with the couple’s daughter Zuzka when they arrived in Ireland. “Other immigration stories are very different to ours. We did not want to move here for savings, we wanted to change our lives. We had no idea about State supports or benefits, we just knew how to speak English and felt we had the power to move somewhere new.”

Krzysiek quickly found a job at a call centre but says the first few months were financially very challenging. “When we moved here in September we shared a place with friends but in December we moved into a house and had to pay the rent and bills. Compared to Poland the prices were very high. We had some savings but they ran out quickly.”

Twelve years later, the couple still live in the same house with their children. Their three daughters go to the local school and Franek is studying sound engineering and media production in Waterford. “They speak both languages, Polish and English, and they speak Irish between themselves,” says Krzysiek. “They feel Polish but have access to both cultures and speak a very different English to the English we speak.”

Over the years, as Krzysiek continued writing the stories of the Polish community, the couple also began organising events for Poles living in the area. “I realised there was a need for the Polish community to have some meeting place outside of church. We also wanted to keep Franek bilingual but it was hard to keep the Polish reading and writing going. So for his sake we decided to organise workshops for kids where they could meet and keep the language going.”

In 2012, the couple were invited to help set up a Polish village as part of the inaugural Waterford Winterval festival. “The first year we did it it was very simple; there were only four people involved and we had basic gingerbread workshops. Now we have 20 people with a small cafe, craft gallery and Polish people coming from all over Ireland to show off their arts and crafts.”

Like most immigrants, the couple often worry about their parents back home in Poland. “Sometimes I feel very divided because we live a comfortable life here and I love my job with the Little Red Kettle theatre but our parents are getting older,” says Iwa. “We have this stress that they need our support but that they don’t have the courage to ask us or tell us they feel weak and tired. I love Ireland and my life here is so calm but it sometimes feels very hard.”

Krzysiek has recently started considering moving back to Poland. “We’ve been here 12 years and Poland has changed a lot in that time but Ireland has changed too. I’m not saying the people here are different now but I have more thoughts about going back home to be with family. We know our kids are happy here and they love their school and friends but they also miss their grandparents and their cousins. They often ask when are we going to visit. We kind of feel stuck in-between the two places.”

“Everything has its pluses and minuses,” adds Iwa. “The physical distance from home has made us much stronger as a family because we didn’t have the support of family. We’ve had to help each other.”