Ross O’Carroll-Kelly: ‘Our way of dealing with our children’s anti-social behaviour has been to totally ignore it’ 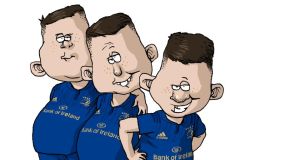 Sorcha is grinning at me like she’s just dropped something on her foot – as in, she’s smiling, but at the same time she looks like she might actually scream at any moment. She’s tense. We’re both tense? It’s a massive, massive day for us.

Yeah, no, the triplets are storring in their creche’s annual nativity play and the atmosphere in the assembly hall in Little Cambridge is literally electric.

“These are the moments!” as all the other moms and dads have been reminding each other all day. You can see that they’re all, like, bursting with pride, determined to remember this afternoon forever – some of them are even recording it on their phones so they can show it to their children when they’re older.

But we’re just tense – and for obvious reasons. Brian, Johnny and Leo are swearers.

It was Honor who encouraged this tendency in them by rewarding them for their most creative use of the F, B and – I’m sad to say it – C words, by giving them Maltesers and peanut M&Ms, dropping them into their filthy little mouths like a mother bird feeding its young.

Obviously, as south Dublin parents, our way of dealing with the problem of our children’s anti-social behaviour has been to totally ignore it in the hope that it would one day hopefully stop of its own accord. Two years later, it still hasn’t, which is why Miss Meyler – their teacher – thought it wise to give them non-speaking roles today.

So Brian, Johnny and Leo have ended up as sheep in the stable where Jesus is about to be born. And, in fairness to them, they do look terribly cute in their little Shaun the Sheep onesies, smiling sweetly as Joseph and Mary, with a pillow up her shirt, arrive into the stable.

“Oh my God,” Honor whispers, “will you two relax?”

She’s sitting in between me and Sorcha.

She goes, “Dad, you’ve been holding your breath for the last 30 seconds. And, Mom, you’re squeezing my hand so tightly, you’re going to break my actual fingers.”

We both tell her we’re sorry.

I’m there, “We’re just worried in case one of our kids drops a fock-bomb in front of the Son of God – or, worse, in front of some of south Dublin’s most judgy parents.”

Sorcha goes, “I wish I’d drunk more of that mulled wine at the interval.”

Honor goes, “You two are hilarious! The boys are doing great up there! And wait till you see the finale they have planned!”

It takes a good 30 seconds before that line lands with me and Sorcha. Then we both go, “Finale?” at exactly the same time. “What finale?”

Honor laughs. She’s like, “Er, they were the only kids in the play without an actual line! I wasn’t having that! So I’ve been teaching them something that they’re going to do at the very end.”

I look up at the stage. A little girl playing an angel goes, “Glory to God in the highest – and peace to all peoples. Be joyous, for today, in the town of David, a saviour was born.”

I suddenly jump to my feet and stort clapping, at the same time shouting, “Bravo! Bravo! Come on, everyone, let’s hear it for the kids!”

But people stort shushing me and telling me that it’s not actually over yet?

“Yeah, no, I think we’ve got the general gist!” I go. “Well done, everyone! What a production!”

People stort telling me to sit down.

The angel goes, “He will be called Wonderful Counsellor, Mighty God, Everlasting Father, Prince of Peace.”

And then I notice the boys looking down at Honor as she beckons them forward. I hear Sorcha go, “Oh! My God!” as the boys walk to the front of the stage. I notice Miss Meyler, in the front row, looking at them as if to say, “What the fock?”

I actually close my eyes. And that’s when the most incredible thing happens. They stort singing:

Think of your fellow man,

Lend him a helping hand,

You see, it’s getting late,

Their voices! Oh my God, their voices! Where the fock did they learn to sing like that? I turn and I look at Sorcha. She has her mouth open and tears are streaming down her face.

And the world will be a better place,

And the world will be a better place

For you and me,

I look down at Honor. I’m there, “That’s what you taught them?”

She goes, “Why do you always think the worst of me, Dad?”

“Well, sometimes I can be good.”

I pull her close to me. I go, “I know you can, Honor. And it’s those times that make all the other times very nearly bearable.”

An amazing thing happens then. All of the other moms and dads stand up as well and they stort singing along and Miss Meyler races over to the piano and picks up the tune.

Another day goes by,

And still the children cry,

If you want the world to know,

And the world will be a better place,

And the world will be a better place

For you and me,

When the song ends, there’s barely a dry eye in the house. People are bawling and hugging each other and saying they genuinely feared the worst when they saw those boys – “those boys,” they actually call them – walking to the front of the stage. And I look up at them – Brian, Johnny and Leo – staring out at the audience, enjoying this wonderful moment. And suddenly, out of nowhere, the three of them raise the middle fingers of both hands and they shout, “Merry focking Christmas!”