Conor Pope: I actually have a soft spot for the hardy Christmas annual that is BTs Marvel Room 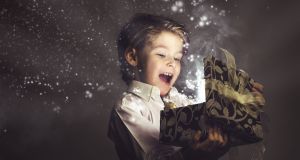 You never know what you’ll find in the ridiculous room. A small bear for €450? A baseball cap for €175? Photograph: iStock

I spent much of last Monday evening smelling like a carnal flower. Drawn to its arresting name, I couldn’t help but wonder if the unfamiliar perfume I saw in the Brown Thomas Marvel Room, where I’d found myself by chance, smelled like a furtive fumble in a Woodie's Garden centre. So I opened the tester and, without so much as sniffing the cap, doused myself in what turned out to be an overpowering, lingering – and hideously expensive – floral fragrance with not even a hint of Woodie's-themed carnality.

I moved on. I actually have a soft spot for the hardy Christmas annual that is BTs Marvel Room even if by rights it should be called BTs Ridiculous Things at Ridiculous Prices Which You Buy in a State of Agitation as Time Runs Out So You Will Seem More Thoughtful and Imaginative Than You Actually Are Room – for what it would lack in brevity, it would make up for in accuracy.

Smelling like a burlesque dancer after a hard shift at the Moulin Rouge, I aimlessly wandered the small corner of the large department store marvelling at the madness of money and trying not to repeatedly blurt out “The boom is back baby!” in an Eamon Dunphy voice.

There were classy-looking lightboxes to help people with their herb gardens because, I suppose, the sun is just too free, and there were charts detailing lists of things we all have to do and places we all have to see before the grave takes us. I hate these lists. They always make me feel equal-parts judgey, smug and inadequate.

Even so, I looked over the to-do-before-death suggestions and mentally crossed some things off and scowled at others. I’ve never been whale watching although I did see a dolphin in the Liffey. Okay, full disclosure, I didn’t actually see the dolphin – it was cold and raining and I didn’t want to leave the office – but I did see footage of it on Twitter which is virtually the same thing.

I’ve never jumped off a cliff into water or spent a night in a tree house either and I suspect that if I live to 200 I’ll do neither. And I couldn’t help but wonder if the person behind the poster had ever flown Ryanair before suggesting sex on a plane was a top thing to do before we die?

As I wandered and wondered, I briefly tuned into the conversation of three older ladies who looked for all the world like they’d just come from a casting call for turn-of-the-last-century dowager aunts. They quizzed a confused security guard about the mini Lamborghinis and Porsches on the shop floor.

“How much are they?” one woman said. The security guard looked at the price which was just under her nose and just under €400.

“That’s not too bad, but I couldn’t have my grandchildren running around the house in those,” she told her friends with a haughtiness you’d have to be born to.

I made my way to the Tiffany Bear section – yes there is an entire section devoted to Tiffany Bears. As I stood staring, slack jawed, a perfectly made-up store assistant approached me.

“He’s very cute, isn’t he? And yes, I know, he has a hefty price tag,” she said pre-empting me infuriatingly.

The bear – which was not much taller than my hand from wrist to fingertip, was €450. I couldn’t help myself. “How on Earth can a bear cost 450 quid?”

“Well, he’s a Stieff. And he’s Tiffany and he has a lovely silver brooch and he has blue hands and feet and he’s limited,” she said at speed as I sighed like Vincent Browne at a Fianna Fáil ardfheis.

Another shelf was populated by small wooden dolls painted to look very vaguely like Prince and Marilyn Monroe and Andy Warhol, and other people I didn’t recognise. Another staff member approached me full of bright toothy smiles.

“But why would adults want dolls,” I asked genuinely confused.

But surrounded as I was by madly priced things of questionable merit, the one thing I couldn’t get my head around was the hat. There was a baseball cap with a price-tag of €175. And it didn’t even come with a Tiffany trinket. It was just a cap with the word “Cap” emblazoned on the front in a large white font. The display was accompanied by some spiel about the “designer” and his ironic aesthetic but I wasn’t buying it.

I stopped a passing shop assistant to check the €175 wasn’t a misprint. “That’s the brand, my man,” he said with a kind chuckle he might use when talking to a confused grandparent. “You have all these kids in their 20s and they get there first taste of money and they wanna spend it.”

“The boom’s back baby, the boom is back,” I said with a flourish as I bundled my hideously expensive purchases - which for the sake of Christmas surprises must remain under wraps - under my arm and wandered out, undeterred by my own hypocrisy.