Sean Moncrieff: ‘The Irish love a good death. Actually no, bad deaths are even better’

Like a car crash, I can’t stop looking at Brexit 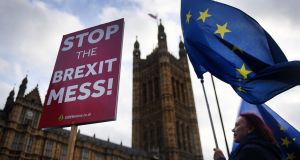 The Brexit debate rumbles on. The various parties cling to their beliefs – even if those beliefs have ceased to make any sense. Photograph: Andy Rain/EPA

The Irish love a good death. Actually, no: bad deaths are even better.

Like me, you’ve probably had the experience of the regular phone call home, when your mother would run through the latest victims of mortality; often people you barely knew or never knew at all; though your mother would insist that you did.

Those who had surrendered to old age would come in for little analysis. Much more interesting was when someone was unexpectedly caught in the grips of some grim malady. Or better yet, an appalling accident involving a car or some demonic farm machinery.

However, the point was never to dwell on the death itself. This was more a framing device, to provide context for the funeral. Invariably, it would be massive.

There would be a poignant touch, such a football jersey or a musical instrument laid upon the coffin. The family would be close to defeated by their grief, hardly able to stand from the weight of it.

My mother would always describe this mise en scène, and then sigh loudly, as if there was some lesson we could draw from this continuing anguish.

But if there was one, she never articulated it. I suspect she felt that death, especially tragic death, should mean something. But she could never figure out what that was.

She’s not alone there. Her interest, the general human interest in the misery of others is a perfectly natural impulse, triggered mostly by empathy and our own survival instincts.

Negativity bias – the tendency to pay more attention to bad things – is hard-wired into our brains, and for the perfectly sensible reason that we tend to learn more from bad situations than good ones.

The person who gets everything right all the time never improves. Thus we tell each other stories about death. We watch the news about natural disasters and wars. Our stone-age brains are telling us to learn something useful. But our modern sensibility knows that we can’t. All too often, tragedy is completely senseless.

This is what I’ve been telling myself about Brexit, or my weird addiction to it. Like a passing motorist, I can’t look away, even if it slows down my day. Even if I know that the news bulletin I’m going to watch or the article I’m going to read won’t tell me anything new.

I could more usefully watch Paddington or Captain Underpants with Daughter Number Four, but instead I force her to watch Channel 4 News, and a parade of politicians making rock-hard predictions about a future no one can know.

All that’s actually happened over the past couple of years is the vote to leave, the triggering of Article 50 and Teresa May’s everyone-hates-it deal. Other than that, it’s been nothing but galaxy-sized clouds of hot air, with Europe, Ireland and the various warring factions in the UK endlessly repeating the same points.

The only lesson to be drawn is the one that Europe had (apparently) learned after the second World War; that when groups of people take a view, the more opposition they encounter, the more they will cling to those beliefs. Even if those beliefs have ceased to make any sense. Even if it’s effectively a giant act of self-immolation.

Perhaps I’m watching in the hope that it will come to an end, a collective epiphany on how silly and destructive this all is. Yet it never happens. I don’t expect it to.

I feel no glee about this. I like the British. But I can’t stop looking as they do this to themselves. And like my mother, the best I can do is sigh loudly, and wish there was some meaning to any of it.