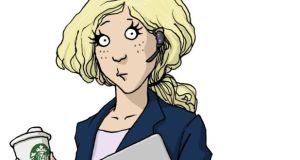 Sorcha calls us for dinner – or what she calls dinner? When I arrive downstairs to the kitchen, the island is covered with what look like the ingredients for a cake –we’re talking bowls of dried fruit, then a plate of some weird stuff that seems to be mostly sawdust and looks like it was swept off the floor of a pub in Temple Bor.

Honor looks at me with horror spreading across her face. “Oh my God,” she goes, “she’s definitely lost it this time. You need to phone a doctor to come and give her a shot of something.”

Sorcha goes, “Stop being ridiculous, Honor! We could all do with losing a few pounds after the Christmas we’ve had – and that includes you, Ross!”

Yeah, no, my wife’s efforts to lose a lot of weight in a very short space of time are a regular feature of the O’Carroll-Kelly New Year. We all remember the Sleeping Beauty Diet of 2007. The Tapeworm Diet of 2009. The IV Drip Diet of 2011. The Chew and Spit Diet of 2012. And the Cotton Wool Diet of 2014. They’re always pretty extreme, which is why they never last more than a few days.

I’m there, “I’m presuming this is another one of your madcap ideas to try to lose two stone over the course of a long weekend?”

“There’s nothing madcap about it,” she goes. “It’s called the What Would Jesus Eat Diet?”

Look it up. It’s an actual thing.

I don’t have to eat anything, Ross! Some of us have a thing called willpower?

She’s there, “You can stop rolling your eyes, Ross. This is scientifically proven. Someone famous did it - her name is in one of my magazines - and she lost, like, loads.”

I’m there, “So what exactly does the What Would Jesus Eat Diet involve?”

“Well,” she goes, “you can eat only the things that Jesus is mentioned as having eaten in the four Gospels of the New Testament. We’re talking figs, olives, pomegranates, grapes, vinegar, low glycemic bread, then obviously fish with fins and scales. Then you have intermittent periods of fasting, sometimes lasting up to 24 hours.”

“I’m having one of those intermittent periods right now,” I go. “Because there’s no way I’m eating any of this muck.”

Honor laughs, in fairness to her.

Sorcha goes, “Do you know what your problem is, Ross? You have no capacity for doing things that are in any way difficult.”

Which actually hurts, because it’s exactly what Declan Kidney said to me when he left me off the Ireland schools team back in the day.

I’m there, “Well, you can stay here and eat this feast fit for a hamster if you want. I’m heading to Eddie Rockets. ”

I’m there, “I think I’ll drive this time if it’s all the same to you?”

Sorcha goes, “I’m coming with you,” and I laugh because I know how much she loves Eds.

But she’s there, “I don’t have to eat anything, Ross! Some of us have a thing called willpower?”

Twenty minutes later, we’re sitting in Ed’s in Stillorgan Shopping Centre and we’re trying to decide what to order. Honor is reading out the various menu items just to drive her storving mother demented. It’s quite funny actually.

Sorcha is reading her own menu, going, “I’m sure there are things on here that I can eat,” while at the same time looking at her phone, crosschecking various items against, I’m presuming, an online Bible.

“Are you actually doing a word search of the Old Testament,” Honor goes, “for ‘buffalo chicken wings’ and ‘gorlic mushrooms’?”

She can be terribly cruel - it’s hilarious if you’re not the one on the receiving end.

“Actually,” Sorcha goes, “I’ve found something that I can have?”

“It’s fine then. I’ll just have the actual fish.”

Honor’s there, “You do know it comes in breadcrumbs, don’t you?”

“Well,” Sorcha goes, “I’m sure they had breadcrumbs in Jesus’s time, Honor.”

“What, they had Donegal Catch, did they?”

I laugh. No choice in the matter. I’m there, “You are getting a high-five for that, Honor - that’s as sure as two points follows five.”

“I’ll have the fish,” Sorcha tells the waitress, “and I’ll just scrape off the breadcrumbs.”

Our food arrives and it smells incredible. Sorcha keeps trying to put a brave face on things. She’s scraping the breadcrumbs off her fish with a dessert spoon, at the same time going, “As diets go, it’s not as restrictive as you might think. It’s basically just simple Mediterranean food, wholesome and unprocessed. We could all do with cutting things like flour and sugar out of our diet, as well as eating more dates and legumes.”

“It’s just takes a little bit of imagination,” Sorcha goes - but, at the same time, I can see she’s, like, salivating at the smell of our nosebag. “For instance, for breakfast, I was thinking I could have oatmeal with walnuts and berries and a glass of orange juice - freshly squeezed, obviously. For lunch, I could have a tuna salad with tomato, cucumber and romaine lettuce and then - this is the exciting bit - as much balsamic vinegar and olive oil dressing as I want!”

I’m there, “Yeah, good luck with that Sorcha.”

“Then, for dinner, I could have something like lentil soup to stort, followed by grilled salmon with steamed broccoli with hummus on it and then-.”

She actually gives up mid-sentence. She reaches across the table and takes my burger out of my hands and sinks her teeth into it. She’s suddenly got, like, grease and mayonnaise and tomato juice spilling down her chin.