Hillary Clinton or Michelle Obama: who is the most popular woman in America? 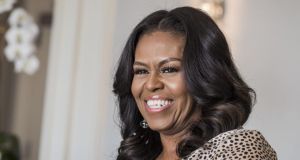 Michelle Obama has overtaken Hillary Clinton as the United States’ most admired woman, a spot Clinton had held for 17 years. Obama won by “a significant margin”, with 15 per cent of the vote, according to Gallup, which has surveyed 1,025 American adults for its annual poll.

In second place, with 5 per cent, was Oprah Winfrey – her 14th time in that slot. She was followed by Clinton and Melania Trump, both at 4 per cent.

For the 11th time in a row Obama’s husband, Barack, was the most popular man, a spot he has now held for one year as president-elect, eight as president and two as former president – to the undoubted chagrin of President Donald Trump, who came second for the fourth year in a row. Barack Obama got 19 per cent of the vote, Trump 13 per cent.

In an age when younger women in search of powerful role models are faced with uninspiring pickings, Obama represents something desperately welcome

But the real story of the poll is the unrivalled popularity, and incomparable likability, of Michelle Obama.

There’s something about Michelle; the challenge is to try to distil exactly what that something is. She is intelligent, sure; she is warm, undoubtedly; she is clearly compassionate; and she is funny, with her gentle goading of Barack for his lack of punctuality or lack of familiarity with the laundry basket, and the love of sweets she shares with George W Bush. She appears authentic, that value we are all supposedly craving in this age of the Kardashianification of everything.

But there’s more to it than any of that.

Part of her appeal is that she has shown women of the generation following hers that it is possible both to be a stable presence for your family and to achieve your own ambitions, and that – with a willing partner, and the right set of circumstances – it can be done with ease and grace rather than with punishment, self-immolation and sacrifice.

She has demonstrated that, although drive and ambition are important, knowing when to lean out requires a different, but equally vital, kind of strength and intelligence. And, of course, she has proven that you can be a woman in the very top echelons of public influence and not have to hide your more traditionally “feminine” qualities, such as your capacity for empathy and compassion.

In an age when high-achieving younger women in search of powerful role models are faced with sometimes uninspiring pickings – a choice that includes the German chancellor, Angela Merkel (also in Gallup’s top 10), who doesn’t call herself a feminist despite being one of the world’s most prominent beneficiaries of the fight for gender equality; Teresa May, whose premiership represents a victory not for women but for a white, middle-class, university-educated woman with a hard line on immigration; or Sheryl Sandberg and her Silicon Valley-honed “lean in” mantra – Obama represents something both different and, it seems, desperately welcome.

The appetite for Obama’s brand of difference became all too clear during her recent book tour – which might have been a full-on rock tour, taking place in packed stadiums in front of roaring, jubilant crowds.

She just gets it, you find yourself thinking when you read her or listen to her. Her speeches are unrivalled, often even by her husband’s. She is articulate, passionate, emotional, natural. But that’s not it, or not all of it, anyway.

Perhaps the most significant facet of her appeal is her relatability. Her life experience is vastly different from that of most other women in the developed world, but her struggles seem to be universal, or at least have the appearance of universality.

With her combination of passion, influence and relatability, Obama has managed to transcend the limits of the role set out for her, and the trite, self-chosen title of mom-in-chief

On having it all and Sheryl Sandberg’s lean in mantra, she told a crowd of 19,000 in Brooklyn: “Marriage still ain’t equal, y’all. It ain’t equal. And I tell women that it’s not equal – that whole ‘so you can have it all’? Nope, not at the same time. That’s a lie. And it’s not always enough to lean in, because that shit doesn’t work all the time.”

It was the minor expletive that garnered most of the headlines, but it was her linking of inequality in the domestic sphere to inequality at work that was most interesting – her rage at the unfairness of how having it all has somehow become doing it all. (And we wonder why that prospect seems not to be terribly appealing to many young women.)

Obama also talked about how the world is still a dangerous place for women, in more ways than the headline ones: “It doesn’t always look like physical abuse. It doesn’t always look the same. It’s those little cuts. Those little negative comments. It’s somebody, when you’re walking down the street and some man looks at you and makes a comment about you, as if you wanted... That’s a cut. That’s a slice into a woman’s self-esteem, when somebody talks down to them. If you talk down to women at all, and a woman is in earshot of what you’re saying, that’s a cut to her. And then the cuts get deeper, because there’s abuse and there’s rape. There’s sexual assault... The world is unsafe for women, and I want our men to understand that about what role they’re playing to make us feel safe or unsafe.”

On the tour she also got into the kind of nitty-gritty bits women mostly reserve for intimate conversations with their female friends: going for marriage counselling; the realisation that only she is responsible for her own happiness; her struggle with infertility and imposter syndrome; the importance of those female friendships, and not getting into what she calls “that catty stuff”.

With this combination of passion, influence and relatability, she has managed to transcend the limits of the role set out for her, and the trite, self-chosen title of “mom-in-chief”.

It’s no wonder that there is an appetite for more Michelle Obama, in whichever form she is willing to make herself available: as the head of some global nonprofit; the next African-American world leader, maybe; the first woman president of the United States, even.

But it is her position simultaneously inside and outside politics that has given her the freedom to be that authentic, relatable voice that her followers seem to crave. If she gives in to the lure of #Michelle2020 she risks losing the essence of what it is that makes her so likable. In any case, Obama has made it clear, over and over, that she has no interest in the “hardscrabble, drag-it-out rancour” of politics.

She has already done enough to ease the path for ambitious younger women following in her stead – by carving out a new, healthier way to be a woman in public life, and simply by naming what she calls that “shit” we still have to contend with.