How to holiday with kids: stress-free trips with babies and toddlers in tow

In the first of a three-part series, Sarah Walsh shares her survival guide for apprehensive parents 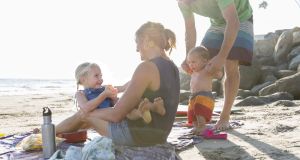 On the beach: while a holiday with young children tends to include a beach, you can also mange well with a swimming pool

I do know that I wouldn’t have missed those early trips for anything, even though travels with babies and toddlers always have their ups and downs. I’m thinking of a particular beach in Spain where our now 16-year-old, then six months, had his first real day of just playing with the sand. We hadn’t thought of buying an actual bucket or spade but he happily used empty water bottles and anything else we gave him to move sand around in the shade for hours – and I can still picture him as he did it.

So what makes a good holiday or short trip with small children? While you do have to compromise and slow down in terms of what you can see and do (not necessarily a bad thing), in some ways it’s a lot easier than when they are older. You get a chance to see the world through their eyes – they will spot fascinating things when we are too busy following a map to the well-known sights. They are also less likely to rebel against your well-laid plans than when they are older.

With the added bonus of relativity short flights, many European cities make a great destination, particularly if they are by the coast. You can, for example, spend a morning seeing the Sagrada Familia church in Barcelona, then spend the afternoon at the Barceloneta beach in the city. If you have a good buggy for your toddler, you can walk for a while before lunch so that your child will fall asleep for the daytime nap – and if it’s a long nap, you might be lucky enough for some adult tapas time before he wakes.

In the same way that adults behave differently when on holidays – getting up later, staying out later – kids’ routines can change temporarily while away – it is often preferable because of the heat anyway. While you wander around European cities, you’ll see kids up late at night, so you won’t feel like a bad parent.

If your hotel doesn’t have a swimming pool, you can often seek out a local city swimming club

On one holiday, we found San Sebastián in northern Spain to be particularly good for travelling with toddlers. The beautiful city beach of La Concha is steps away from the heart of the city. Our two boys, then aged three and one, happy to be finished their morning of wandering the city, enjoyed hours on that beach. As we hadn’t planned to go to the beach, our lack of towels didn’t matter as it was a short walk back to our city hotel – a lovely impromptu beach afternoon.

While a holiday with young kids tends to include a beach, you can also mange well with a swimming pool. If your hotel doesn’t have a swimming pool, you can often seek out a local city swimming club – it’ll be much like a hotel pool, where you can pay for daily access, with lifeguards and maybe a snack bar. The added bonus is that your kids may play with local kids, adding to the travel experience.

Italian beaches often have pool clubs, so you get the best of both worlds – the facilities of a club (pool, toilets, restaurants) with direct access to the sea. They can be pricy though – check in advance. In other countries, you can often rent sunbeds with the all-important sunshades for your little ones on public beaches.

For us, one of the best things about a holiday abroad is eating out – enjoying the best food and wine that each place has to offer. Over time, we learned various ways to make that easier with small children. When our first was a small baby (we took him on his first foreign holiday at six months), we would give him his dinner at our accommodation. When we didn’t have access to cooking facilities, we asked for hotel help to heat up ready-made baby food jars. We would then go for a walk with him in his buggy, already in his pyjamas, around his normal bed time. He would usually be asleep after a short walk around the town or by the sea.

We would then go for dinner at a local restaurant, choosing somewhere quiet with room for the buggy beside our table. We were usually lucky – he normally slept happily through our dinner and if he did wake, one of us taking him for a further short walk usually did the trick. He would sleep until we took him home after dinner, gave him his night bottle, then off to sleep again in his cot.

On a trip to the beautiful Italian town of Pietrasanta on the Tuscan coast with our one-year-old, we loved how well our strategy worked in a town famed for its excellent restaurants. On one night, however, we turned up for our reservation with our very blond baby asleep in his buggy, where he was spotted by the charming restauranteur. She loved his hair and his angelic sleeping demeanour so much that she admired him until she woke him up, much to our horror. All was well, though, as she proceeded to carry him around the restaurant all evening, introducing him to other diners, even leaving him with a couple seated near us at one stage (the man at the table seemed delighted, his girlfriend less so) and taking him into the kitchen to show him the activity there.

We (okay, he) became minor celebrities in the town, approached a few times by other diners and even by the restauranteur’s daughter to check if this was the famous William!

That experience in Italy taught us the importance of the culture of where you travel with a small child. We have always had very good experiences in Italy, Spain and Portugal travelling with our kids – they were seldom the only small children in restaurants and dining with family is encouraged and normal, whether in tourist-heavy or very local areas.

We have had good and bad experiences in France – ranging from a restauranteur taking time to show our six-year-old how to pour, aerate and taste a glass of good wine (that goes in our good experience category) to arriving at a restaurant at 6.50pm with a two- and a four-year-old, given a table but told we cannot see a menu or have a basket of bread (which we could see from where we sat) until 7pm as that was when the restaurant officially opened. On the same trip, we asked a hotel for milk from the kitchen for the two-year-olds’ night bottle. They refused, even though the restaurant was still serving, the kitchen was still open and the local shops were closed. Though we often think the simple pleasure of sharing some freshly baked bread and whatever local fruit is in season in France for lunch more than makes up for some inflexibility.

Food markets can be another great pleasure on holidays in any country – it is both entertaining and rewarding to choose food and snacks from a good market – and the kids love to eat the samples they are given.

A fish market is great – young kids are simultaneously freaked-out and fascinated by the range of ugly, unusual and smelly produce on sale and and great that they know fish doesn’t start out as a square, white thing on a plate. The landing of the catch and the immediate early morning auction at the port in Cambrils was great for an early morning wander for my husband and two small boys in Spain – and great for my lie-in too. Other times, we have taken turns to take the kids out for an early stroll and juice/coffee to allow one of us to take a rest – my husband met a fellow wandering parent early one morning in Nerja in Spain and he had his coffee with her and her son, talking about the joys and challenges of travelling with toddlers.

Once upon a time, we drove from Dublin to Portugal with a three-month-old, a three-year-old and a five-year-old, with ferry crossing, France and Spain all covered within one week. Most people look at us with horror when we mention it but it worked really well. Long drives work fine with portable DVD players if you suspend your “good parent” goals when you have to... you can make it up later by hearing their excitement as they cross a border to a new country (even if it’s just another toll booth and they can’t tell the difference). Travelling with young children is worth it.

Travelling with toddlers: hints and tips:

- you probably need less equipment than you think – a buggy might be indispensable but most accommodation can easily provide a cot on request – and even if you get stuck, it’s probably cheaper to buy a travel cot if you have to and leave it behind, than paying the luggage charges out and back on your flight

- try giving your little kids a choice . For example, taking them to a local shop to pick out a simple colouring book or small toy gives them a little bit of ownership and hopefully some relaxed meals out

Next week: Travelling with small children and pre-teens