Sean Moncrieff: ‘Oh no, the boom may be back’ 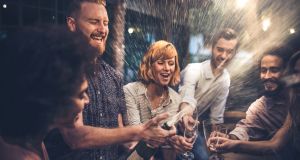 Is there really so much to celebrate? Photograph: Getty

Here’s my story. Last November we thought we might go away in the new year. Just a night or two. Perhaps one of those old country piles you find in the Blue Book with a posh restaurant nearby. We emailed a place everyone said was great. We said our dates were flexible, but it would be nice to get a Friday or Saturday night. Maybe next March. They said they had no availability until April. Of 2020.

You may have your own story. An €8 pint or a fiver for a cup of tea. As far back as 2017, articles started popping up in the media using the B word, usually in the form of handy lists: five ways to spot the boom is back! Seventeen clues to the return of the boom! Twenty-one signs the boom has returned!

These lists contain much you might remember. The skyline infested with cranes. Paying ridiculous prices for ordinary things. Spending money on nonsense. And the reason why we apparently need clues to spot the boom is because there is no clear definition of what one is. My economic consultant, Professor Google, says it is a “period of significant output” without specifying what “significant” means. In this paper a couple of weeks ago, David McWilliams categorised Ireland’s 2018 economic performance as “pretty good”; hardly the language of party time.

Yet incomes last year exceeded incomes in pre-crash 2008, and things do feel boomier. What’s curious about these articles dealing with the allegedly returning boom is the breathless isn’t-it-all-a-laugh tone: as if taking day trips to New York or queuing overnight to buy Adidas runners is something to be celebrated; not a reminder of how crass we became during the first decade of this century, and how it was a prelude to a disaster.

The good news is that this boom, if it is a boom, is different from the old one. The bad news is that you’re paying for it. This time around, the Government is depending far more on income tax, which, although a far more stable source of revenue, means that the middle is indeed getting squeezed. It also means that if you have a boom-related anecdote, it’s probably to do with some extravagance you observed, rather than one you indulged in. Just like the last time, the boom ultimately benefited people who were well-off anyway.

And I imagine most of the people who benefited – who benefit again now – are on the east coast. The skyline filled with cranes is a Dublin sight. Most of the over-priced and overbooked restaurants are in the capital. That’s not to say that other urban areas won’t do well from this upturn, but there are many parts of Ireland where they have felt no difference at all, where even the Christmas splurge wasn’t enough to arrest the economic decline of the main streets. There are small and medium-sized towns that feel like they have no centre anymore, bar a few pubs, perhaps a bookie’s and a chemist shop. People don’t bump into each other on the street so much anymore because they’ve no reason to be there.

But of course, the most striking sign of the economic recovery – if that’s the correct term – is the increasing numbers of people who can’t find a place to live simply because it’s become too expensive to buy or rent. Thanks to Brexit, it may not get as bad as before. It may even go horribly wrong. But that hasn’t prevented the apparent drift over the last couple of years back to a money-based narcissism. If there’s one thing we learn from history, it’s that we learn nothing from history.