Are We There Yet?: Fairground attraction was bought by Irish man after wild goose chase in America 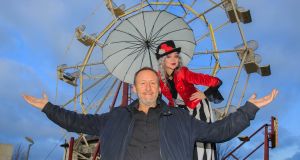 Trevor Cullen pictured with his ferris wheel which was used in the movie Grease. The ferris wheel features in the Dún Laoghaire Christmas Festival that runs from from November 24th to January 2nd. Photograph: Gareth Chaney Collins

Grease was the first movie I saw at the cinema. It was Screen 1 at the Savoy Cinema of O’Connell Street in 1978 and it was a very big deal. I was seven years old at the time.

I read with dismay this week that a third of parents are letting their eight-year-olds play over-18 video gameswith graphic violent and sexual content. I would not let my nine-year-old daughters anywhere near the hormonally charged Grease, so the chances of my letting them near Grand Theft Auto, which apparently contains shoot ’em-ups involving sex workers, are remote.

Never mind dodgy video games, I do not know what my mother was thinking letting me watch Grease at age 7. (She was probably thinking about how to feed eight children on 50p and a handful of butter vouchers but poverty is no excuse for anything as some members of our current government might say.)

My favourite scenes from that movie take place at the carnival bit near the end when goody-goody Sandy, played by Olivia Newton John, turns into a deliciously uninhibited vamp with skin-tight black trousers that apparently – here’s some Grease movie trivia for you – she had to be sewn in to every day. It’s probably the best makeover in movie history.

And I love We Go Together (like rama lama lama ka dinga da dinga dong), the song that bookends the movie. Grease, by the way, is 40 years old. Sorry to be the bearer of such horrific news.

They had special screenings during the summer to commemorate the event, which I ignored on account of wanting to deny the passing of time. But a little bit of Grease is currently in Dún Laoghaire, Co Dublin, and it turns out I can’t ignore this.

Remember the ferris wheel? The one on which Rizzo from the Pink Ladies (played by Stockard Channing at the grand non-high-school-going-age of 33) tells Kenickie of the T-Birds that she’s not actually preggers? Well, an Irish man called Trevor Cullen only went and bought this fairground attraction after a wild goose vintage ferris wheel chase across America.

Cullen is from a family of carnival kings and queens. His parents travelled around Ireland with one of the first mobile cinemas in the 1950s. He told me all about his mum, known to all as Treasure, and his dad, Harry, who got into the carnival game after their cinema burned down.

As a kid, Trevor, who worked with his parents and siblings at the carnivals, fell out of love with funfairs. “They lost their romance for me,” he explains. He was a musician and in addition to gigging he built a successful advertising business, which failed after the downturn. That was when he began collecting vintage funfair rides, carousels and roundabouts, all lovingly restored.

“I don’t like tacky rides, I just like the original, vintage pieces,” he says. “They’ve a kind of magic for me”.

When he’d tell people he had a funfair which he hires out for corporate events and festivals, they would always say: “So you have a ferris wheel?” He was asked this question so much that he decided he’d actually better get one.

How he found this particular wheel is a long story involving even longer car journeys between Nashville and Memphis and ending in Cincinnati, where he found himself in a field one tropically hot day, in the middle of nowhere, on an original Eli Bridge ferris wheel with the owner who told him it was the one used in Grease. (There is no paperwork to prove this mind you, but Cullen in convinced of its authenticity. Built in 1958, it has “hair protectors” which can be seen in the movie and which do not feature on other similar Eli Bridge models).

And there’s more: the Eli Bridge company was started by William Sullivan in 1893 in America, and while I haven’t found his exact ancestry yet, I’m going to assume that good old William was Irish.

Which is 40 years old, remember. But no need to dwell on that.

Some things to do with children this weekend . . .

It’s beginning to feel a lot like . . . okay, I know it’s a bit early but it’s all kicking off Crimbo-wise so let’s ease ourselves in gently. As well as that 55ft ferris wheel that will be a big hit, the Dún Laoghaire Christmas market is a feast for the seasonal senses as carefully selected vendors sell authentic hand-made gifts and delicious treats every weekend from November 24th to December 23rd opposite dlr LexIcon from 11am to 7pm.

They say “aromas of gourmet sausages, Hungarian beef goulash soup and lángos, German gluhwein and steaming hot chocolate will fill the air as you wander through the Christmas market with hand-crafted gifts and decorations, jewellery, metal art, sculpture and a whole host of very special quality gifts and treats that are not mass-produced but hand-crafted with love”. dlrcoco.ie

Even some of the pantos are up and running with the crew behind Robin Hood starting off early. It has an excellent cast which includes, Ireland’s acclaimed tenor, Paul Byrom who will take to the stage for this magical production which runs from Friday 23rd, November 2018 to Sunday 20th, January 2019. It’s all happening – oh yes it is – in The Helix, Collins Avenue, Glasnevin. Tickets €19.50. thehelix.ie

Last week I told you about the hunt for a name for a brand new children’s festival being established at The Ark cultural centre in Dublin. The Ark’s children’s council were looking for ideas for the name and they received loads of entries. Now a name has been chosen – Right Here, Right Now – and the children are looking for help from other kids about what should be programmed as part of the festival. If your children have ideas for what should feature in the festival contact the team at The Ark on 01 1670 7788, from Monday -Friday 10am-4pm.