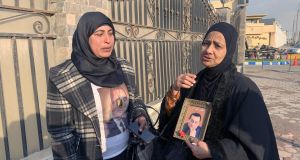 Supporters of former late president Hosni Mubarak hold his photos outside a military hospital where his body is kept, in Cairo, Egypt, on February 25th. Photograph: Khaled Elfiqiepa/EPA

Hosni Mubarak, who died on Tuesday at 91, ruled Egypt for longer than any of the country’s other monarchs and presidents since the demise in 1848 of Muhammad Ali, the Turkish pasha who, during his 43-year reign, began the modernisation of this ancient land.

Mr Mubarak succeeded Mr Anwar Sadat, president-for-life, a week after his assassination by Islamist militants on October 6th, 1981, and was toppled by 18 days of deadly popular protests in early 2011. He was tried and sentenced to prison for ordering the crackdown that killed 845 demonstrators and for corruption, but charges were ultimately dropped and he was freed in 2017.

Mr Mubarak inherited an Egypt where the economy was in crisis, nepotism and corruption were rife, and external indebtedness was rising. Once an exporter of agricultural products, Egypt was importing more than half its food to feed its rapidly growing population as well as a variety of luxury goods for its small, extremely wealthy entrepreneurial class. The gap between rich and poor was wide and widening, with 5 per cent of Egyptians appropriating more than 20 per cent of national income and the lower 20 per cent of the populace struggling to exist with only 5 per cent.

Soon after he assumed power in 1981, Mr Mubarak appointed a committee of experts to try to find out what was wrong with the economy. But unlike Muhammad Ali who transformed a backward province of the Ottoman empire into a Mediterranean power, Mubarak did not initiate radical measures to deal with the country’s woes. Muhammad Ali opted for centralisation and land reform, Mubarak carried on with the free market economy introduced by Sadat, concentrating the means of production and commerce in the hands of a few oligarchs.

To keep order, the Egyptian government extended the state of emergency imposed after the murder by radical fundamentalists of Mr Sadat. This restricted the freedoms of assembly, movement and residence and gave the authorities wide powers to arrest and detain thousands of members of outlawed organisations, particularly the Muslim Brotherhood. This populist movement was, paradoxically, permitted to have a small representation in parliament, which was dominated by Mr Mubarak’s National Democratic Party.

Under Mubarak, Egypt continued its slide as a regional power, initiated when Mr Sadat concluded a peace treaty with Israel in 1979. Cairo was seen by many of its own citizens and by the Arabs as a client of Israel’s ally, the US, which gave $2 billion a year in aid to Egypt to keep it afloat. Cairo regained some credit with Arab moderates by backing the 1993 Oslo accord concluded between Palestinians and Israelis. But as the timetable slipped for Israeli withdrawal from Arab territory occupied by Israel in 1967 and for the emergence of a Palestinian state, the peace process and its backers lost the credibility with the Arabs. Following the assassination of Israeli prime minister Yitzak Rabin, in 1995 by an Israeli extremist, Mr Mubarak made his first and last visit to Israel to attend Mr Rabin’s funeral. The Egyptian leader praised the fallen Israeli and urged his successors to pursue the peace process as a “memorial”. But they did not heed his call.

The collapse of Palestinian-Israeli negotiations in July 2000 and the eruption of a second Palestinian uprising in September of that year precipitated an election in Israel which brought the hardline Likud chief, Ariel Sharon, to power. At the March 2002 Arab summit in Beirut, Egypt, once the paramount Arab power, was eclipsed by Saudi Arabia, which secured the approval of the Arab monarchs and presidents of its peace plan calling for full Israeli evacuation of Arab land in exchange for full peace and normalisation with the Arab world. Mr Sharon responded to this initiative by re-invading the West Bank in 2002 and Gaza in 2003. This infuriated Egyptian and Arab opinion, weakening Mr Mubarak on the domestic and regional fronts. In the run-up to the US military campaign in Iraq, the US president, Mr George Bush, dismissed Mr Mubarak’s warnings that a war would create havoc in the Arab world and his prediction that such a conflict would exacerbate hatred of the US in the region. Like Cassandra, Mr. Mubarak was fated to be correct but ignored.

Born in 1928 into a prosperous family dwelling in a town in the Delta, Mr Mubarak attended the prestigious Egyptian Military Academy where he earned a degree in military science. In 1950 he joined the Airforce Academy and took a second degree. Mr Mubarak was far too junior an officer to be a member of the Free Officers group which overthrew the monarchy in 1952. This powerful clique dominated Egypt under President Gamal Abdel Nasser but its influence waned during Sadat’s presidency when the oligarchs reasserted themselves.

Mr Mubarak rose steadily through the ranks of the airforce, becoming commandant of its academy and commander of Cairo West military airbase. He was in charge when Israel staged a devastating raid on Egypt’s airfields early in the morning on June 5th, 1967, destroying most of the country’s warplanes as they sat parked on the apron. Although there was sharp criticism of the failure of senior officers to predict Israel’s attack and attempt to save Egypt’s airforce, Mr Mubarak weathered the storm. He became air force chief. The military regained the respect of the Egyptian people by joining the Syrians in a surprise attack on Israel in October 1973.

Mr Mubarak was rewarded for the armed forces successes by being appointed air marshall. In 1975, he became vice president under Mr Sadat and was elected to the presidency on October 14th, 1981. Mr Mubarak was re-elected unopposed in 1987, 1993 and 1999. He never appointed a vice president although he was suspected of grooming his son Gamal as his successor. Mr Mubarak countered this suggestion by saying, “We are not a kingdom. We have a constitution.”

He was succeeded initially by Mohamed Morsi of the Muslim Brotherhood who was removed by the military in 2013 and replaced by army chief Abdel Fattah al-Sisi, who has crushed all dissent in Egypt since his election in 2014.

He is survived by his wife Suzanne Thabet, and sons Gamal and Alaa.