‘I think she is terrified’: Woman facing deportation to Nigeria from Sligo 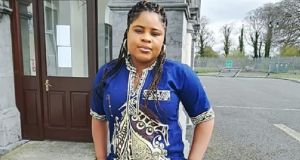 Almost 3,000 people have signed online petitions in support of Loveth Oyiboka (29), who has lived in the Globe House direct provision centre in Sligo for four years but is facing deportation.

Community groups in Co Sligo have appealed to Minister for Justice Charlie Flanagan to intervene in the case of a young Nigerian woman who is due to be deported on Friday.

Almost 3,000 people have signed online petitions in support of Loveth Oyiboka (29) who has lived in the Globe House direct provision centre in Sligo for four years. She says she has no family left in Nigeria as her parents were murdered.

The Movement of Asylum Seekers in Ireland (MASI), which organised the petition, said the woman was the only member of her family to survive an attack by Boko Haram on October 24th, 2015 in Obama village in Borno state.

“She would be in danger if she was sent back,” said MASI spokesman Lucky Khambule.

He said a decision this week to halt the deportation of Brazilian man Lucivaldo Araujo da Silva (35) , a father of three Irish-born children, showed that Mr Flanagan had the power “to change lives”.

Ms Oyiboka, who is studying health and English with the Sligo Education and Training Board, said she was frightened and had no one left in Nigeria.

“My mom and dad are the people of Sligo,” she said.

Several groups that Ms Oyiboka has volunteered with have organised an event to support her this Thursday in Anderson’s Bar in Sligo.

She has volunteered with the Tidy Towns committee, the St Patrick’s Day parade and Sligo Global Kitchen, which aims to help asylum seekers integrate into the community.

Anna Spearman, an artist who founded Sligo Global Kitchen, said she has known Ms Oyiboka since she arrived in Sligo.

“She came here with no friends and family but she has a lot of people looking our for her in Sligo,” she said. “It is scary to think of a young Catholic woman being sent back to Nigeria. I think she is terrified.”

A spokesman for the Department of Justice said that for reasons of confidentiality he could not comment on individual immigration or asylum cases.

He said applications for international protection were examined in detail and all available appeals processes had to be exhausted before a deportation order was made.

All decisions could be reviewed by the High Court and it was open to any person to make an application under the Immigration Act to have a deportation order revoked based on changed circumstances, he added.