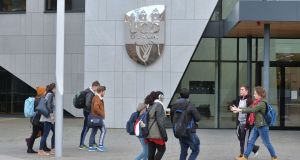 The aim of the class is to equip students with the confidence to intervene if they see sexual harassment or experience it themselves. Photograph: Alan Betson

A mandatory 90-minute lesson on how bystanders can intervene in cases of sexual harassment or assault will be taken by some 5,500 incoming first-years at University College Dublin in September.

The aim of the lesson, which will be embedded into the orientation programme for first-year students, is to “equip students with the confidence to intervene in small ways in the event they do see something or experience it themselves”, according to Dr Aideen Quilty, the academic lead on the bystander programme.

“It’s a really important message for incoming students and it’s about increasing knowledge and awareness as well as prevention,” Dr Quilty said.

Following “overwhelming positive feedback” to a pilot of the programme which was delivered to approximately 200 students in 2019, the pilot is being scaled-up to deliver to all incoming first year undergraduates. An online site covering the information taught in the workshops will also be made available to all students at the university.

Sara Hollander, who runs Consent at UCD, said the bystander intervention programme and reporting tool are a “step in the right direction”.

“The bystander training is a great way to get the conversation going. Sexual assault on campus happens and it can’t be ignored in the hopes of it fading away. Students, teachers and visitors all need a way to alert the school if something happens,” Ms Hollander said.

The programme was officially launched in UCD on Tuesday with an online tool allowing students to anonymously report abuse. The website, called Report + Support, will allow students to report rape, bullying and harassment.

“The bystanders initiative is at the preventative end of things, whereas the reporting tool is there to ensure if students have experienced abuse or witnessed it that there’s a safe arena they can go to,” Dr Quilty said.

Speaking to The Irish Times after the launch, chief executive of the Dublin Rape Crisis Centre Noeline Blackwell said while the new mechanism will not identify individuals who are carrying out such abuse, “it should help highlight systemic problems within the university, including places where there seems to be a worrying level of abuse”.

“Sexual harassment and assault is a systemic and prevalent scourge in all of our society, including our universities. It will only be addressed when it is named and challenged. Measures such as those now undertaken by UCD will help confront harmful conduct and hopefully reduce or eliminate it,” Ms Blackwell said.

The lessons were modelled on a similar workshop-based initiative at University College Cork, led by Dr Louise Crowley. “UCC were leaders on this. So we built on their insights and practices and we were keen to have a programme that was larger, targeted at all incoming first years and specific to UCD,” Dr Quilty said.