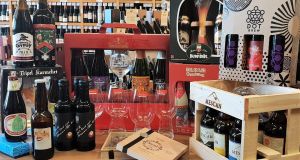 Blackrock Cellar will make up beer gifts from smaller three-bottle sets to larger hampers of 20 beers or more.

We beer drinkers are easy to please at Christmas – a few good bottles, maybe throw in a nice glass, and we’re happy. If you’re not sure what someone’s favourite beers are, however, a gift pack with a range of styles is a good idea.

“Keep it simple if you don’t know what they like,” says Josh Fitzpatrick Couzy of the Blackrock Cellar in Co Dublin. They make up beer gifts from smaller three-bottle sets to larger hampers of 20 beers or more, and if you happen to know your partner or friend is mad about sour beers or double IPAs, for example, they’ll help put together a special selection too. “Generally, it’s nice to mix up the styles in a hamper, with a few pale ales or IPAs and then put in one or two speciality beers too.”

Many Irish breweries have released their own pre-made gift packs and Winter Warmers is the name of Boyne Brewhouse’s new special edition of three 330ml bottles. It includes its award-winning, barrel-aged Imperial Stout, a Belgian Dubbel and its Winter Ale. The Porterhouse’s Barrel-Aged Celebration Stout comes in a double box with a stemmed glass. All of these are higher alcohol so perfect for sipping by the fireside.

Mescan Brewery in Westport has just released its Beoir na Nollag, which is a strong, dark ale at 8.8 per cent aged in whiskey casks and dry hopped. This is a good one for cosying up with on Christmas Eve – or can be kept for a few months for ageing – and it comes as part of a lovely wooden box set of six fine Mescan bottles and a beer glass.

Irish online company the Beer Club delivers Christmas hampers, ranging in price from €49.99 to €79.99, and has a huge selection of breweries from around Ireland to choose from, and it has a wide offering of international beers too, such as Cloudwater, Ballast Point, Tool and much more. (Delivery is three to five days so get your orders in soon!)

If you want to impress someone who loves craft beer, get your hands on a bottle of Galway Bay’s 200 Fathoms, an imperial stout that is released once a year – and always eagerly anticipated. Larger 750ml bottle are also great for gifts and sharing at the table – check out 8 Degrees’ Trespass Dark Farmhouse Ale with Blackberries – this comes in a box set with its delicious Hopsfume Brett IPA.

Fans of good beer can never have enough nice glasses and some pre-made beer packs will include branded ones – such as the Christmas Delirium Tremens or Lindemans gift set. Off-licences often stock a range of glasses and will advise on the right one to match a beer, or look out for the Spiegelau Craft Beer glasses – which are definitely going on my Christmas list – they can be bought individually or in a set of four (€26 at the Blackrock Cellar).

If there’s talk of home-brewing in your house, there are some basic, all-you-need starter brewing equipment kits with prices ranging from about €90 euro to almost €1,000 for all-in-one automated machines such as the Grainfather or Pico Brews. See the Home Brew Company, Get Er Brewed and Home Brew West.

The Alltech Beer Festival is Ireland’s largest three-day beer festival and it takes place on March 14th-16th at Dublin’s National Convention Centre. Tickets are on sale now for €15-€45.

For a very special gift for someone who likes good beer or has just started to get curious about it – check out YellowBelly’s Beer Club. Membership is €150 and includes a YellowBelly Welcome Pack with tickets to special events including a brew day with head brewer Declan Nixon, a summer barbecue at the brewery in Wexford and, most importantly, regular deliveries of exclusive, members-only beers that you won’t find in shops or off-licences.

Are almonds bad for the environment?
10 Life after an ectopic pregnancy
Real news has value SUBSCRIBE