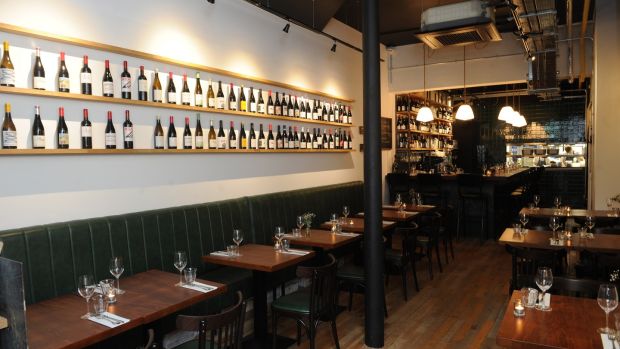 So your newly opened restaurant is hosting two food critics and a gaggle of chefs but you manage to look as happy as a clam? Maybe Simon Barrett and Liz Matthews just do good game face, smiles that widen when the pressure gauge goes into the red. Whatever vibes are at work, there is a rightness that I rarely find in any restaurant, never mind one with just three nights’ service under its smart new belt.

We all knew Uno Mas was going to be good. It’s from the couple who brought you Etto, a place where critics regularly part with their own cash to set the needle to true north again. In Uno Mas they’re rejoined by chef and business partner Paul McNamara, who has been cooking up a storm in nearby Locks for the past year.

It’s been a wait. I’ve been risking life and limb on the bike peering into the old Fogo’s (no, me neither) on a grungy corner of Aungier Street for weeks now. An autumn opening trickled into a December one. If one of the many ginormous cranes outside fell on the building tonight, a sizeable chunk of the Irish food fraternity would be toast: John and Sandy Wyer of Forest Avenue are celebrating their daughter’s birthday on one side; Anita Thoma is talking wedding plans with her fiance on the other; young skinny chefs gather around John Wyer in an animated cluster.

The first great news is that Uno Mas is bigger than Etto. The fit-out is simple white walls and an exposed ancient brown brick one where the bricks are held in squares of timber, a wood and masonry detail in a terrace that supposedly includes Dublin’s oldest house, dating from the 1600s. The only other decoration are some wine shelves, a wine map of Spain and Portugal and a cocktail menu blackboard.

It’s a bigger menu than they started with in Etto, and the influence here is Spain rather than Italy. They are bigger tables, with bigger gaps between them too, so the noise (the only thing I don’t like about Etto) is not ear-splitting.

The first mouthful is pure tapas bar treat, a lip-stinging gilda pepper sliced in two, each half book-ending a juicy gobstopper-sized green olive that’s been draped with an anchovy, the whole lot finished with a grassy olive oil. There are Cecina croquetas – breaded and fried balls of airy, creamy béchamel studded with flecks of air-dried beef, more chew than beefy flavour and a combination so good you could burst into song. Pig’s ear comes sliced into barely-there splinters that are breaded and fried into moreish matchsticks with a velvety squid ink mayonnaise.

Venison carpaccio on the next plate, a bigger one from the “starter” list, has a serving of surprisingly mild meat, with pickled walnuts and curls of radicchio spines – the perfect bitter fresh crunch to the sweet petals of meat.

With each plate we move away from the tapas mouthful to be eaten on the hoof end of things towards a restaurant knife and fork experience. I want all the mains but settle for the hake, which is great, but the most memorable elements are the glossy rainbow chard leaves on the top and a tangy clam broth with a fermented black garlic sauce that ties the whole thing together in a way that could only come from repeated iterations of this dish until it was nailed.

Another option is the Iberico pork presa, a shoulder muscle that Anita explains by pointing to her own shoulder. (We are chatting and sharing food by this stage.) There are juicy slices of it with tangy Pink Fir apple sauce and a ratte potato with flower sprouts. A slick of sprout like a cleaner’s mop through the apple-y piggy potato remnants on the plate makes for one of the best mouthfuls I’ve eaten all year.

The flan queso (literally cheese flan) gets the gong for most modest description of a dessert his year. Like the prunes in Etto, this is jaw-droppingly simple and good, a silken flan covered in a caramel that’s barely caramel, more sugared butter thickened to the consistency of warm honey. I will dream of this one for weeks to come. There’s a brilliant chocolate and olive oil ganache with a spidery web of chocolate swirled in a circle around it like a dervish.

In this season of parties it’s the impromptu ones that you remember. And that’s what happened among a small bunch of ardent food fans tonight. Uno Mas means One More. It’s a great name, not just because it’s building on the first venture but also because there is probably only one more enterprise that can be done at this level. It takes the hardest graft to build out from the tiny wine bar that roared into something as delightful as Uno Mas. We knew it would be great. The thrill is that it’s perfect.

Dinner for two with two glasses of wine, sparkling water and dessert came to €119

‘I expected everyone in Ireland to be drunk and Dublin to be dangerous, but I’m a big fan now’

My life is out of synch without my best friend

As seen on TV: Dublin Georgian used in Rebellion series on market for €575,000

Róisín Ingle: Another lockdown – it won’t come to that. Will it?