‘Croatian and Irish women are very similar. I am Irish with them’

New to the Parish: Ljiljana Matkovic arrived from Croatia in 2015 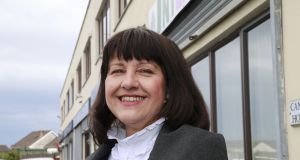 Ljiljana Matkovic at the Clondalkin Intercultural Centre: “The only difficulty I had when I came here was meeting friends but then I found people at the centre who wanted to help me.” Photograph Nick Bradshaw

Whenever Ljiljana Matkovic walks down Dublin’s bustling Grafton Street her mind is transported back to an afternoon nearly 18 years ago when her life suddenly changed. She came to Ireland in 2001 to spend a fortnight alone learning English in the capital. She did not tell friends and family where she was going, just that she needed a break abroad, and was totally shocked when she walked out of class one day only to discover a friend from home standing in front of her.

“Today he’s my husband but back then he wasn’t even my boyfriend. For seven years he’d wanted me but he was younger than me so that seemed impossible. Nobody knew where I was but he found me in Ireland.”

Standing in the middle of a crowded Dublin street, the young man from Matkovic’s hometown bent down on one knee and asked her to marry him. “I was so surprised but he told me ‘Lili, I’m serious, please’. I told him, ‘you’re crazy’, I was afraid. He was younger, I was older, I couldn’t do it. But when we went back to Croatia I said yes in the end. My mother, father and sister all told me I was crazy.”

The couple had been working for a transport company in the city of Osijek in eastern Croatia near the border with Hungary and Serbia. After they were married they moved to Zagreb where Matkovic began following her dream of becoming a writer. She felt inspired by her experience in Dublin and wrote her first short story about her own romantic encounter on the busy Dublin thoroughfare.

“I was very surprised when the editor called me and said ‘your story is fantastic’. My second story was also about Dublin and after that I wrote a lot for theatre. I also wrote a book about my father.”

Matkovic continued writing these “romantic novels”, as she calls them, for a Croatian magazine and to date has written more than 100 stories and three novels. She was still working as a writer when in 2015 her husband was offered a job in Dublin. The couple were on holiday by the Croatian coast when he received a call from a recruiter asking if he would like to work with a tech company based in Ireland.

‘Dublin is the city of love’

“My husband said, ‘Lili, we have an excuse to go back to Dublin, that’s our city’. It had all started here – for us, Dublin is the city of love. He asked me what did I think, should we go and I said yes. We decided very quickly.”

The couple arrived in Dublin in August and found a home in Clondalkin. The first few months were very tough for Matkovic. She did not speak a word of English and her husband was very busy with work. “I never really spoke English before, it was very difficult. A writer’s job is very lonely, you’re always alone.” Matkovic regularly thought about moving back to Zagreb during her first year in Dublin. “I often went home to Croatia because I didn’t have friends here. I came to Ireland aged 54, that’s old to move. It was not a good time for me.”

Eventually, Matkovic decided to try and find an English school to improve her language skills. She was directed to the Clondalkin Intercultural Centre where she signed up to the women’s club and an arts and crafts workshop.

Matkovic quickly discovered that not only could she meet fellow immigrants at the centre’s classes but that it was also a way to meet Irish women. “It was amazing that I found that place for women. Croatian and Irish women are very similar. I still don’t speak very good English but I don’t feel like I’m in a foreign place anymore. When we sit down to drink coffee and chat I don’t feel like I’m not Irish. I am Irish with them.”

“I have amazing women friends from Hungary now. We were neighbours back in Croatia but now we are friends.”

Earlier this year, Matkovic was told the Clondalkin Intercultural Centre, which opened in 2008 and is located across the road from a direct provision centre, would have to close after funding from the Department of Justice came to a halt. The centre had been receiving about €40,000 a year from the Government through South Dublin County Council, which was granted under the South Dublin County Partnership (SDCP). However, the SDCP was not among the 14 projects to be allocated funding under the new “competitive tendering process” introduced last year.*

Matkovic began contacting local politicians to highlight the positive impact the centre had played in her own life. She also spoke at a public meeting about how the centre gave her a sense of belonging in her new Irish home.

“It’s not only about people who have come here from other countries, I have lots of friends from Clondalkin, people who were born in Dublin, and for them it’s important too. I sent lots of messages saying please help us at the centre, this is important for Clondalkin. If I hadn’t found the intercultural centre maybe I’d have gone back to Croatia, who knows.”

Matkovic’s stepson, her husband’s son from a previous marriage, recently moved to Ireland and is now studying archaeology and Celtic studies at UCD. “We had spoken a lot to our son about Ireland, about how we met and fell in love here so he was always very interested in the place. We brought that love of Ireland to him.”

The couple are also planning to buy a home in Ireland. However, Matkovic is worried about how the planned closure of the Clondalkin Intercultural Centre will impact people in the local area.

“The only difficulty I had when I came here was meeting friends but then I found people at the centre who wanted to help me. I don’t have nostalgia for home because of the intercultural centre. I have friends here now.”

*Shortly before publishing we were informed that the Department of Justice approached the SDCP with a view to continuing funding for the centre. No agreement has yet been reached and negotiations are ongoing