Sean Moncrieff: ‘It could be that baldness simply equates to ugliness’

Hair is no more than a hat, attached to your head. So why should it define you? 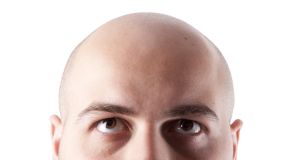 “Baldness insults seem to be predicated on the idea of profound failing in the baldee. Only out of charity has the hirsute community been pretending not to notice their grotesque deformity.” Photograph: Getty Images

If someone wants to put the boot into me on Twitter, they will sometimes deploy the B-word: you baldy bastard would be a typically alliterative mot juste.

Baldness insults seem to be predicated on the idea of profound failing in the baldee. Only out of charity has the hirsute community been pretending not to notice their grotesque deformity, which is usually the result of smoking crack or working in the slave trade.

Or it could be that baldness simply equates to ugliness. Certainly lush hair is a component in the imagined male ideal. Michelangelo never carved any bald men. US presidents are required to have hair, even if it’s weird. And I must admit to a pang when I see men in their 20s already experiencing coastal erosion on their foreheads. Before them are the stages of grief: disbelief that it’s actually happening, then hope that it might halt by itself, then the careful morning arrangement of what’s left: until the day when the lighting conditions, (TV studios are unusually cruel), demonstrate that the struggle is over. You’re a baldy bastard.

Hairless, and forever alone. Why would anyone go for a baldy when there are so many fleecy-headed young gods available?

So for those younger men, it may be a good thing that researchers at the University of Manchester say they have discovered a drug – originally intended to treat osteoporosis – that may reverse hair loss. Hope it works out.

Going bald is a small lesson in mortality, and perhaps a bigger one in identity

One should never say never, of course, but I doubt if I’d be interested. I can’t quite remember what it was like having hair and I suspect all it would give me is something else to have to maintain. And being bald is now intrinsic to me.

For men, losing hair is relatively common and by far not the worse thing that can – or will – befall them. But it is a small lesson in mortality, and perhaps a bigger one in identity. For the Wise Bald Man will eventually learn that hair is a social construct; sort of. Other than head warming, hair doesn’t have any function. It’s mostly decorative. Some wear it long, some wear it short, and some shave it off altogether. It is no more than a hat, attached to your head.

So why should a hat define you? Obviously it doesn’t. What the Wise Bald Man comes to know is that his anxiety doesn’t stem from the lack of a hat, but from what others will think about his hatlessness: he realises that if other people don’t mind, then he won’t mind either.

How ridiculous. Why should other people, most of whom barely know you, tell you how you should feel about yourself? About a hat. Of course, this applies not just to hat-hair: it applies to weight and skin colour and accent and orientation and bums and boobs and shoulders and feet. Ask any teenager. And many adults. Some are stupefied with anxiety about themselves.

Meanwhile, the Wise Bald Man has attained something more attractive than hair: peace with himself. Comfort in his own skin. It is an enviable quality, even to good-looking people with fabulous locks. And to me. (I am not the Wise Bald Man, by the way. I’m a rattling bag of neurosis.) But I do know that to presume that attractiveness – sexual or otherwise – has anything to do with looks reveals a paper-thin understanding of human dynamics.

Of course, this doesn’t mean that you should pay no attention to your physical appearance; it’s about finding a balance. Nature gives us all advantages and disadvantages. I’m bald, but I’ve a nice-shaped head. Or at least I think I do. And when it comes to my head, my opinion is the only one that counts.

‘We treat surgery as kind of icing on the cake’
9