Laura Kennedy: Why should the time of this man be less valuable than that of his colleague, who had chosen to have children? 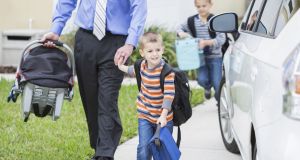 The time of those with no children can only be considered ripe for the claiming by entitled people with children if they perceive that time as empty. Photograph: iStock

There is a silent friction in our society. It is expressed in shifty, sidelong glances, the disapproving pursing of lips and besmirching of absent parties on coffee breaks. I have observed it for some time. I have talked with friends about it, and colleagues. It is the attitude of parents towards those without children, and vice versa.

Recently, when I was horsing indelicately into a fish-finger sandwich – that pragmatic culinary classic the hipsterisation of which I take great exception to (keep your cursed capers; propel them hence) – I overheard two men conversing. They were in their 30s and looked like the sort of people who had kept bad life decisions to a minimum.

Their eyes were bright, their shirts were ironed, and they looked like the sort of people you might give charitable consideration to if they suggested you switch your mortgage to the standard variable rate. Had they suddenly transmogrified into puppies, you would adopt the two on the spot. I observed, while trying to dab clandestinely at a gobbet of mayonnaise that had dropped from my sandwich on to my arm, that they were discussing work colleagues. A good venting of office resentment, being richly fibrous as we all know, relaxes a person and keeps the bowels regular.

I was, in truth, more interested in my notions sandwich and the restorative cup of Barry’s that accompanied it, but when the men’s conversation moved to a particular topic, I couldn’t help but be a little bit interested. It seemed clear neither of them had children. One of them, the fellow with what you might call a slightly more “curated” appearance, who evidently enjoyed sporting activities, was complaining he found it unacceptable that a colleague sometimes left the office early to attend his son’s football matches. The complainer, through a mouthful of hummus or some other such drab and mysterious goo, pointed out he would consequently be late for, or miss entirely, his own evening football practice as the colleague’s absence meant he had more work to do before he could leave.

This is hardly an apocalyptic scenario. The very crust of the Earth will not scream open and swallow us all with the injustice. However, it speaks to a presumption that seems to run deep within us – that the time of parents is more valuable than that of the childless. In families of adult children, it is often the sibling with no offspring of their own to whom the burden of care of elderly parents falls. Why, I thought, should the time of this floppy-haired man at the cafe – Tarquin or Gabriel or whatever other name his hair implied was his – be less valuable than that of his colleague who had chosen to have children?

Our time is our own

Surely our time is our own, and if we choose not to procreate, but instead to do laughter yoga or theoretical physics or whatever else in our own time (replica Victorian hat making, researching the antidotes to various snake poisons – take your pick) then that is as valid as anyone else’s choice? The time of those with no children can only be considered ripe for the claiming by entitled people with children if they perceive that time as empty. We have all heard it – “Sure what else are you doing?” The answer should rightly be: “I am massaging garlic butter into my knees – whatever I like; it’s none of your business.”

Tarquin or Gabriel or possibly Tybalt (he just had that vibe) was missing an aspect of his life that he enjoyed and breaking a commitment he made to himself and others essentially because someone loosely connected with him (let’s call him Greg) chose to be a father and to leave early in the name of the (admittedly important) obligations of fatherhood. I once knew a very unpleasant Greg, and consequently associate the name with truculent and liberty-taking men whose back hair points accusingly at you over the top of their collar like tufty, bristled fingers. Parenthood is a sacred and important duty, but it does not entitle parents to make demands on others. Those without children are not here to compensate for the commitments of those who have them. Most people know this, but there are always a few Gregs to contend with.

It’s time for summery food. Here are four easy dressings that work for every salad
5

Self-compassion important in the age of Covid-19
9