Hilary Fannin: ‘Recipe is a weird word when you’re dyslexic,’ my brother writes 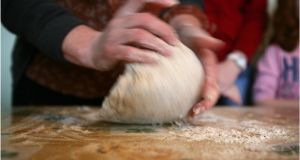 My brother and sister have led unconventional lives. Now, in this strange new dispensation, they are bread-makers. Photograph: Dara Mac Donaill

Like the rest of us, I’m coming to terms with my gadding-about plans being masticated and spat out by pandemic restrictions as emphatically as a mashed-up Brussels sprout might be regurgitated by a belligerent toddler.

In truth, I’m not really that much of a gadder-abouter anyway. Two coffees and a burst of tinkling laughter in a pavement cafe and I have to go home and lie down for an hour.

In pre-pandemic days, when I used to have my roots done and occasionally indulge in a half-leg wax in the giddy expectation of a night out, I’d already begun to notice a change in the way I socialised. Friends were suggesting meeting early so that we could all be home by 10pm to safely pass out in front of Newsnight. It suited me fine. My chin starts drooping after 9.30 anyway, and there’s only so much swivelling around you can do on a barstool before your hip starts acting up. (Barstools – remember them, eh?)

We all have to communicate in different ways now;
we’re actors without a stage to play out our dramas

I find I quite like staying at home. I’m enjoying the stability to be found in reduced routines. In this house, come evening, we cook, have a glass of wine, watch something on the box, go to bed. (And I know in writing this that I am speaking from a position of immense privilege – I try not to take for granted that I have my own home, my own larder, my autonomy.)

We all have to communicate in different ways now; we’re actors without a stage to play out our dramas. All the whispering and coaxing and hissing and kissing, the bitter banter and big reveals, have to be done from the safety of our Ikea armchairs.

I have a tech-savvy mate who has just introduced me to Zoom. Resistant to innovation and always worried that I’ll break something if I press a button, I warily met him halfway, like a rabbit nosing out of my hutch.

“Can you hear me?” I shouted extremely loudly.

“Yes,” he responded through gritted teeth. “Now if you can manage to turn your camera on, I’ll be able to see you too.”

My family’s WhatsApp group has also been hotting up. My brother, a writer and lecturer who now lives alone in a city centre apartment in Bristol, has been posting pictures of his home-made seeded wholewheat loaves, complete with long lists of ingredients and instructions. (Add the liquids to the flour, combining with your recently washed hands.)

“Recipe,” he adds to the group conversation after he’s given the baking time, “is a weird word when you’re dyslexic.”

My sister, meanwhile, is under lockdown in Spain. Her husband has been warned for sweeping the bottom step of their house, the Guardia Civil brusquely instructing him to step inside and close the gate.

My yeast was two years out of date, but it will make a
good doorstop

They live on the outskirts of a village on a barren hillside, with nothing around except some gnarled olive trees and the occasional wild-eyed dog. Sitting on their terrace looking seaward, you can see, my sister tells me, the ribbon of empty highway running from Malaga to Almeria.

She’s been busy in the kitchen too, posting pictures of her solid-looking bake. “My yeast was two years out of date,” she writes under a photograph of a blunt-looking loaf, “but it will make a good doorstop.”

I read my siblings’ messages and remind myself that they have led unconventional lives. They’ve navigated inhospitable oceans, drunk lakes of wine, lived on beaches and nicotine and their wits; they’ve faced down illness and importunity; they’ve howled at moons. Now, in this strange new dispensation, they are bread-makers. (“I’m out of pumpkin seeds. Do you think I could use walnuts?”)

My nephew, a death-metal star (a household name in some cheery households), is spending time on his yoga mat, waiting for the world to reboot. I suspect he hasn’t seen this much daylight for at least a decade. Maybe he’ll find himself making cherry buns.

My niece, meanwhile, is an advance paramedic, working on the frontline. I text to ask her how she’s doing, and she describes the sensation of being constantly on alert, but adds that “there are really nice gestures for healthcare workers”. She says she can’t pay for a coffee anywhere. “Pizza delivery to the hospital last night,” she writes. “People are good.”

My brother responds before the rest of us: “I’ve been trying to set that up with the publicans of Bristol for years.”

* Hilary Fannin’s novel The Weight of Love, published by Doubleday Ireland, is out now.