Sean Moncrieff: Do we know what’s real any more? 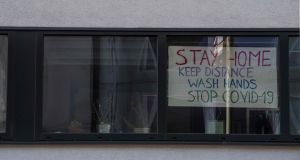 A sign in Berlin, Germany: the new reality around the world is hard to believe. Photograph: John MacDougall / AFP via Getty Images

A few weeks back the inmates of various Big Brother TV shows – in Germany, Canada and Brazil – were told about Covid-19. When they’d entered their respective fake houses, the virus had been a Chinese phenomenon or not known about at all.

The contestants were shown a news report or had some doctor-type explain what was going on. They were all reassured that their families were fine and that those families wanted them to press on with their attempt to achieve BB stardom.

None of the inmates asked to leave. Perhaps they didn’t quite appreciate the scale of what has been happening outside. Perhaps they presumed that even a worldwide pandemic wouldn’t quench the need for personal appearances at rural nightclubs. Or perhaps, as one of the German family members put it, they were safer where they were, insulated from the outside world. Suddenly, the threat of eviction seemed slightly more sinister.

Or perhaps the housemates decided that being on Big Brother was a one-of-kind experience that it would be foolish to walk away from. If this was their motivation, then they were mistaken. Perhaps it should have been explained to them that while they were on Big Brother, the outside world had turned into Big Brother: that afterwards, no one would care about their stories of being stuck in a house. Because everyone would have a story of being stuck in a house.

Of course, the experiences will have been slightly different. Most non-TV houses won’t have had a jacuzzi, and most people would have been stuck in a house with people they know. The BB contestants might have had mixed feeling when the series came to an end, while for everyone else it will be a time of untrammelled joy. Yet in both types, the residents had to come up with increasingly daft schemes to pass the time. They would have had needed Alone Time to bitch about the people they were living with. There would have been tears. And in both scenarios, there might have been a vague sense that none of this was real.

What we perceive as real is based not just on the inputs of our senses but also on expectation: the humdrum stuff that we experience every day is what we come to expect, what our brains can accept. There’s a bit of wiggle-room for novel occurrences; what we used to describe as news. But the times we have been in are, obviously, way beyond that. It has been difficult to metabolize.

Loathe as I am to express any understanding of Donald Trump, but I wonder if his initial and subsequent reactions to the virus were prompted by this sense of disbelief. He’d spent a life bending reality into the service of whatever sales pitch he was making, and his reaction was to continue do that. Everything is fine. It’s a foreign problem. Let’s get back to normal.

Similarly, we were barely a week into the crisis in Ireland and people were crowding into beaches or parks, queuing up to buy chips or ice creams and paying no regard to the physical distancing requirements. Maybe these people were stupid. Or selfish. Or ignorant. Or all three. But it might also be that they simply couldn’t apprehend the enormity of what was happening; even when that disbelief put their own health in peril: it didn’t compute. They were clinging to the old reality in the hope that it was still true. The Real World as Disaster Movie made no sense because it was out of context; it was in the wrong format.

It could be all the screens; the screens that we’re depending on more than ever. We’ve always been aware that bad things happen in the world, but it’s always been mediated through a slim piece of transparent plastic. When our own senses take it in, it’s hard to believe.

Hazel Chu: ‘I’m not saying the Green Party is lost, but it needs direction’
2