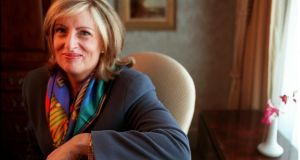 Linda Tripp: she was given immunity from wiretapping charges in exchange for her testimony against Clinton. Photograph: Paul Hosefros/The New York Times

Linda Tripp, a former White House and Pentagon employee whose secret audiotapes of Monica Lewinsky led to the 1998 impeachment of President Bill Clinton, died on Wednesday. She was 70.

Joseph Murtha, a former lawyer for Tripp, confirmed the death. No other details were given.

When Lewinsky completed her testimony about the scandal, she was asked if she had any final comments. According to CNN, she answered, “I hate Linda Tripp.”

Tripp always contended that she had revealed Lewinsky’s private confession of a sexual relationship with Clinton out of “patriotic duty.” She had worked in the White House under President George HW Bush and stayed on to work briefly in the Clinton administration. She was transferred to the Pentagon and its public affairs office.

Lewinsky, who had been a White House intern, was transferred there too, and the women, despite a 24-year age difference, became friends. When Lewinsky confided in Tripp that she had a physical relationship with the president, Tripp got in touch with Lucianne Goldberg, a literary agent who had once reached out to her for information on Vincent Foster,a White House lawyer who committed suicide in 1993.

More recently Tripp had been working on a book proposal tentatively titled Behind Closed Doors: What I Saw Inside the Clinton White House.” Now she had a hook.

Goldberg suggested, among other things, that Tripp tape her telephone conversations with Lewinsky. That was legal in the District of Columbia and in 39 states, but not in Maryland, where Tripp was living.

More than 20 hours of audiotapes were turned over to Kenneth Starr, the independent prosecutor handling the Clinton investigation.

After four years and $30 million, Starr’s investigation had stalled, lost in stale allegations involving the Whitewater land deal in which the Clintons had lost money. Tripp’s tapes suddenly provided a fresh, rich avenue for exploration, galvanising the investigation almost overnight as they carried the potential to bring down the president.

The tapes revealed a complicated relationship between Tripp and Lewinsky. Lewinsky seemed grateful to be able to confide in the older woman, talking with her regularly and for hours at a time about everything from their diets and exercise routines to Lewinsky’s secret romance with the president – all the while Tripp was milking her young friend for incriminating information against him.

During another of their lengthy phone calls, Tripp, fully aware of her betrayal, predicted the demise of their friendship.

“I feel like I’m sticking a knife in your back,” Tripp told Lewinsky on December 22nd, 1997, during a conversation that ran to 68 pages when it was transcribed. “And I know at the end of this, if I have to go forward, you will never speak to me again.”

Tripp was later given immunity from wiretapping charges in exchange for her testimony.

Linda Rose Carotenuto was born on November 24th, 1949, in Jersey City, New Jersey. Her father, Albert Carotenuto, was a high school maths and science teacher who met his wife, Inge, when he was a US solder stationed in her native Germany. The Carotenutos divorced in 1968 after Linda’s mother learned that her father was having an affair with a fellow teacher.

Linda graduated from high school in East Hanover, New Jersey, and went to work as a secretary in army Intelligence in Fort Meade, Maryland. In 1971 she married Bruce Tripp, a military officer. In a 2003 interview she described herself as “a suburban mom who was a military wife for 20 years”. The couple divorced in 1990.

Tripp married Dieter Rausch, a German architect, in 2004. In later years she worked with him in his family’s retail store, the Christmas Sleigh, in Middleburg, Virginia, a Washington suburb.

In addition to Rausch, her survivors include a son Ryan Tripp, and a daughter Allison Tripp Foley.

Tripp was dismissed by the Pentagon in January 2001, on the last day of the Clinton administration. She later sued the justice and defence departments for having released her security and employment files to the news media, and was awarded a settlement of almost $600,000, plus back pay for three years.

On Twitter on Wednesday, Lewinsky wrote: “no matter the past, upon hearing that linda tripp is very seriously ill, i hope for her recovery. i can’t imagine how difficult this is for her family.”