Michael Harding: ‘Overwhelmed, I took my old anti-stress tablets from the drawer’

I contemplated taking one. But if I took one today, I might want one every day 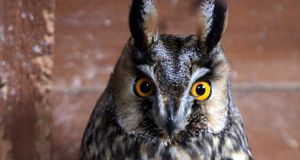 The General reminded me that owls are messengers of death, and since it arrived on the very day that Covid-19 first cast it’s shadow across Ireland, my romance was swiftly shattered and I was overwhelmed with stress. Photograph: Cyril Byrne

Once upon a time there was a vet in Donegal who had a pet seal called Sally. She had been injured when the vet found her, and he nursed her at the range in his kitchen. She even had her own armchair which she sat on for hours and he gave her baths to keep her skin moist and she grew into a happy companion, barking like a dog for her dinner, and barking when she was finished her dinner, and barking when children knocked the door on their way home from school, to say hello to her.

I heard this from a receptionist in a hotel near the coast when I was checking out. There was a picture of Sally the Seal in the foyer and the receptionist said that as a child she often visited the house and played with the seal.

I said, “It’s a lovely thing to have a friend in the sea.”

Then off I went in my camper van, further up the coast, rejoicing in the wonderful relationships that can exist between humans and other animals.

I got excited recently when I discovered a long-eared owl had taken up residence in the spruce tree that towers above our back door. Generations of magpies had lived there for 25 years but they moved to hardwood trees near the quarry last year, so the nest was empty.

I didn’t actually see the owl. But I heard him in the evenings; a clear hoot like the sound I used to make blowing across the top of an empty beer bottle at parties when I was young; an audio cue that always signalled the end of conversations and beginning of music.

In Irish the long-eared owl is referred to as ceann cait, and in Google he appears as a cuddly little bird, although the General reminded me that owls are messengers of death, and since it arrived on the very day that Covid-19 first cast it’s shadow across Ireland, my romance was swiftly shattered and I was overwhelmed with stress.

I stressed about the owl, and about the virus and about survival. I even dug out my old anti-stress tablets from a bottom drawer that I call my “pharmacy drawer” and contemplated taking one to help me relax.

But if I took one today, I might want one every day. And besides, they’re out of date. They were prescribed for me four years ago, but I didn’t use them. I kept them in my wallet for months, and they worked much the same as a holy picture; it was a comfort just to know they were there.

Two weeks ago I gave a talk in Dublin celebrating 50 years of the Samaritans in Ireland. The Samaritans provide a phone number that anyone can call 24/7 if they feel suicidal or chronically stressed. I’ve never used the line but I know someone who did.

His business collapsed. His marriage broke up. And one night he ended up under the table in his kitchen, alone and paralysed by shame and remorse. He had decided to end his life. But at the last moment he phoned the Samaritans – and as a result he lived to tell the tale.

On the train coming home I had a pain in my arse. That’s what stress does to me. The pain was so bad I started worrying that the hip might need replacing. And I wasn’t the only one on the train who looked worried.

“Everyone is buying paracetamol and toilet rolls,” a woman whispered in my ear. “But you’d be better to get the virus early. Because in the end all the respirators will be in use, and they won’t have anything to pump your lungs with, and old people like you and me will be f**ked.”

When I got home I tried to ignore the owl in the spruce, already at his evening hoot. I sat at the fire, imagining seals swimming around me and the sea breeze washing me clean but I couldn’t forget the woman on the train. With her aquiline nose, big glasses and a woolly hat replete with two ornamental ears, she didn’t look entirely unlike an owl.

“Oh dearie,” she was whispering all night in my ear, “I can see you’re still in denial.”