This lockdown is storting to seriously affect me. What has happened to the world? 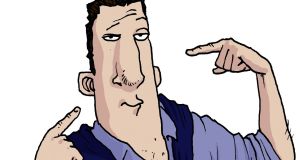 Yes, I think, dropping a watermelon into the trolley every Thursday night, I am the kind of man who’ll chop and eat this at some point over the next seven days.

Then, before the week is over, I’m putting it in the bin, having decided the whole thing was too much trouble.

The need to pretend you’re a healthy family is even greater when you shop online. As Sorcha says, the last thing you want is some randomer filling your trolley and thinking ill of your choices.

Which is how we reached a point this week where we found ourselves with 77 bananas that no one showed the slightest interest in eating, especially since most of them were turning black. And that’s when Sorcha announced – with the serious tone of, I don’t know, a prime minister declaring war – that she was going to make banana bread.

Sixty seconds later, I’m back on the Vico Road and – probably like you – I’m thinking, What has happened to the world we once knew?

“Oh my God,” she went, “everyone on Instagram is doing it!” which – in my wife’s world – means we have no choice but to comply too. “I’m going to do Donal Skehan’s one!”

So she got to work. And within an hour, she had made 14 freshly baked loaves of banana bread. And that was when I reminded her that no one in this house even likes the stuff.

“We’re not going to eat it,” she went. “We’re going to give it to the neighbours. Put your mask and gloves on, Ross – drop one in to Gwen and one in to Joy.”

So I get suited and booted, grab the two banana breads – still warm – and set off. A few minutes later, I’m ringing the Loschers’ bell.

Through the door, Gwen goes, “Who is it?”

And I’m there, “Yeah, no, that’s one way of looking at it. Sorcha’s made you some banana bread.”

“I’ve made her some banana bread as well. It’s Nigella Lawson’s.”

“Are you wearing gloves?”

“Well, leave it on the doorstep,” she goes, “then take 10 steps backwards. I’ll open the door and take yours in, then I’ll leave mine on the doorstep and you can take it once I’m safely back inside.”

So that’s what we do. It’s like a hostage exchange. For focking banana bread.

Sixty seconds later, I’m back on the Vico Road and – probably like you – I’m thinking, What has happened to the world we once knew? I think this lockdown is storting to seriously affect me. I got a pop-up on my laptop yesterday that said, “There are hot women in your area who want to meet you!” and my first thought was that a high temperature is a sign of this thing and that women in their condition shouldn’t be meeting anyone.

That’s when I spot a woman, wearing gordening gloves and a Hermes scorf covering the lower half of her face, putting something in our post box at the gate.

I’m like, “Halt! Who goes there?” because I can be very funny.

It turns out it’s Joy Felton, the neighbour from the other side.

She goes, “I made you some banana bread. It’s the Happy Pear one.”

I’m there, “I was just coming to see you. We’ve got Donal Skehan’s.”

“Oh,” she goes, sounding disappointed by this turn of events. “How shall we do the exchange?”

I’m there, “You put that one in the post box and I’ll leave this one on the path on the other side of the road.”

She’s like, “Okay. Have you just come from Gwen’s?”

“Well, maybe I’ll just leave mine in her post box too. I don’t want to disturb her.”

A minute or two later, I’m back in the gaff.

I’m like, “That’s our good deed done for the year, Sorcha.”

She steps out of the kitchen. She goes, “Ross, I know you’re mocking me, but little neighbourly gestures are important at a time like this. What have you got there?”

I’m like, “Banana bread. Gwen Loscher and Joy Felton made you some.”

“Oh, for fock’s sake!” she goes, suddenly losing it. “We’re trying to get rid of banana bread?”

“Er, what happened to little neighbourly gestures are important at a time like this?”

Suddenly, there’s a knock on the door. I shout through it. I’m like, “Who is it?”

A voice goes, “It’s Anthea Shotton, ” who lives five houses down. “I’ve made you some banana bread. It’s the Jamie Oliver one.”

Sorcha goes, “What the fock, Ross? I sent you out with two banana breads and you’ve come back with three!”

“Seriously, she won’t know that you didn’t make it. It all tastes the same anyway.”

So I’m standing there with my back against the door.

I’m like, “We’ve got some banana bread for you as well, Anthea.”

I’m there, “Leave yours on the doorstep, then take 10 steps backwards. I’ll open the door and put this one out for you. Do you need me to repeat that?”

But that’s when, suddenly, we hear Anthea’s voice outside, going, “Ross? This is actually my banana bread you’ve given me.”

“But it’s got Joy Felton’s name on it,” she goes, “in my handwriting.”

Sorcha grabs me by the wrist and drags me down the hallway to the kitchen.

“Ignore her,” she goes. “Hopefully this thing will drag on for months and it’s September before we see her again.”