‘It is a precious moment’: Zimbabweans celebrate move against Mugabe

Tens of thousands of Zimbabweans gather in the capital, calling on president Robert Mugabe to step down days after a military takeover placed him under house arrest. Video: Reuters 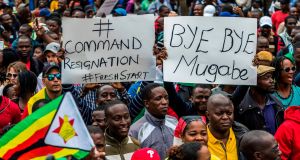 The collective outpouring of opposition to president Robert Mugabe that spilled on to Harare’s streets on Saturday was an unbridled backlash to his 37 years of mostly tyrannical rule.

Black and white, young and old, rich and poor, they came in their thousands to the anti-Mugabe street protests initiated by the country’s War Veterans Association, to deliver a simple message to the former liberator-turned-dictator: “Go”.

The early morning atmosphere suggested these anti-Mugabe protests represented an extraordinary moment for the nation that has known no other president since the 93-year-old first took office in 1980.

Cars adorned with hastily drawn-up posters deriding the leader, had young men hanging out their windows yelling “Mugabe go”. Groups of people began chanting similar slogans in response, and so the collective sense of purpose began to grow.

In the past, Zimbabwe’s riot police would have viciously subdued these protesters using batons, rubber bullets and water cannons.

But members of the police force, the commander of which is a Mugabe loyalist, have been confined to their barracks since Wednesday by the country’s armed forces, the instigators of the military takeover.

For the first time in decades, people cast off the oppressive fear that accompanies the thought of opposing Mugabe and his Zanu-PF regime: and once lifted, the dam of pent-up emotions just burst on to the streets.

The new-found freedom to express dissent and the momentous nature of the occasion left many a protester with tears streaming down their face.

Harare resident Professor Musvaire (42) told The Irish Times he had never been to a political rally or protest before, because of the dangers associated with airing public opposition to the ruling regime in the past.

But the taxi driver, who had a Zimbabwean flag draped around his shoulders, said he and his friends felt compelled to seize a moment they hoped would prove to be a tipping point in the country’s efforts to get Mugabe to stand down.

“I don’t know what I’m feeling, but I’m feeling something very strong inside me,” he said.

“I was not going to visit family in my village this Christmas because of the elections that were expected next year. Zanu-PF [the ruling party] had already started campaigning and intimidating us in these rural areas. But today I am standing side by side with soldiers.

“So you must understand, we Zimbabweans have never been able to express ourselves like this: it is a precious moment. We really need change in this country. Life has become intolerable,” he said.

On the way to Harare’s international airport it became apparent that the joy in the central business district had begun to spread across the city.

The usually impassive commandos manning the blockade around the airport’s perimeter were in a jovial mood, as they checked people going towards the departures and arrivals areas.

Inside the airport, which only two weeks ago was renamed Robert Gabriel Mugabe International Airport, all of the pictures of Mugabe in the departure terminal had been removed from the walls.

Usually crawling with members of the regime’s Central Intelligence Organisation who scan the crowd to detain people the state deems undesirable, the feared officers were only conspicuous by their absence.

The check-in operator at the South African Airways desk was bursting with excitement at what was happening in town. As he checked in my bags, he asked whether the atmosphere was as jubilant as he was hearing.

“It would be so good to be there.”