People are mimicking Sandra Bullock character by walking around blindfolded, which the streaming giant has come out against 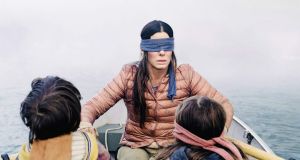 Don’t try this at home... Sandra Bullock in Bird Box

If you’re going to meme at home, Netflix would like you to be careful. You might have heard about the horror movie the streaming service released last month called Bird Box, an adaptation of a Josh Malerman novel. The film, which stars Sandra Bullock, centers on an unknown entity that compels anyone who sets eyes on it to kill themselves, so survivors must blindfold themselves when venturing outdoors.

Critics were mixed on the film, but that hasn’t stopped it from becoming a cultural sensation, and thus a vehicle for viral mememaking. The #BirdBoxChallenge has exploded over the last week, featuring people uploading videos of themselves doing everyday tasks blindfolded. While there have been no reports of serious injuries, Netflix felt the meme was spreading widely enough that it issued a cautionary plea on Twitter on Wednesday.

“Can’t believe I have to say this, but: PLEASE DO NOT HURT YOURSELVES WITH THIS BIRD BOX CHALLENGE,” the company posted on its official account. “We don’t know how this started, and we appreciate the love, but Boy and Girl have just one wish for 2019 and it is that you not end up in the hospital due to memes.” (Boy and Girl refer to two children in the movie.)

Y'all doing this #Birdbox Challenge? pic.twitter.com/Yjx86Ex55f

The videos vary in their danger factors. One, posted Christmas Eve, showed what appeared to be an adult, a young child and a toddler – all blindfolded – frenetically pacing around indoors, a parody of the film. At one point, the toddler runs into a wall.

Others are more mundane. One posted Wednesday to Twitter shows a blindfolded man doing squats with heavily weighted barbells. Another from New Year’s Eve simply showed a man wearing a blazer, a blindfold and large headphones as two other men wearing similar attire strolled in front of the camera. A video posted by YouTube star Morgan Adams titled “24 Hour Bird Box Challenge” – in which Adams and a friend spent a day blindfolded when they are outdoors – has had more than 1.7 million views.

The Bird Box Challenge is the kind of dare that has become commonplace in recent years. One of the most famous was for a good cause: the “Ice Bucket Challenge”, which involved dumping cold water on yourself to raise awareness about amyotrophic lateral sclerosis, also known as ALS or Lou Gehrig’s disease. There have been many others: the Mannequin Challenge. The Level Up Challenge. The Shoot Challenge (involving dancing, not firearms).

Some can do harm. Last year, the chief executive of Procter & Gamble, maker of laundry detergent Tide, pleaded with parents to stop their children from eating Tide Pods, which briefly became an internet phenomenon. There was 2015’s Kylie Jenner Challenge, where young women were putting their lips in shot glasses and then sucking in air in an attempt to have lips more like Jenner’s.

But lest anyone lay the blame on social media and the desire for instant fame, disclaimers like “don’t try this at home” and “professional driver on closed course” long predate the meme era. World Wrestling Entertainment, for example, has issued public service announcements in the past asking that its untrained fans refrain from mimicking professional wrestling moves. – New York Times

Is this the beginning of the end? Who knows, but general practice is open
8