Do you need to calm the f**k down? Here’s how 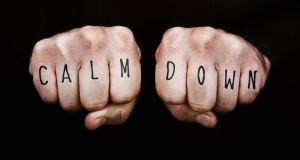 Calm The F**k Down is a new book designed to help people relax. Photograph: Getty Images/iStockphoto

More often than not, self-help tomes have often run a very short gamut, from foggily ethereal to downright condescending. Equal parts fluff, faux-empowerment and sloganeering, many of these books have promised much and delivered little. It was only a matter of time before someone spotted the gaping hole in the market: self-betterment for people who abhor being told what to do.

Welcome to the world of the sweary self-help book, a phenomenon that has shaken up the usually Zen outpost of publishing.

Its origins can likely be traced back to 2011, when the children’s book Go the F**k to Sleep, by Adam Mansbach, became a global bestseller. It was swiftly followed by a maelstrom of turn-the-air-blue titles: Michael and Sarah Bennett’s F**k Feelings, Mark Manson’s The Subtle Art of Not Giving a F**k, Faith G Harper’s Unf**k Your Brain and, closer to home, Irish author Caroline Foran’s Owning it: A Bullsh*t-Free Guide to Living with Anxiety.

The appeal is obvious: most of these titles open the self-help market up to a swathe of people for whom the very idea is anathema. People who hate being told what to do.

“There has been a real explosion of those titles, starting with, I think, [Jen Sincero’s] You Are A Badass,” observes author Sarah Knight. “They’ve been able to find their audience – this core group of people who either didn’t like or feel like they needed self-help books.

Kick in the ass

“The response I get from readers all over the world is, ‘this is like having someone giving me a swift kick in the ass, as opposed to the friend who will just placate me in the moment’. People have written to say that the books have helped them in a way a doctor or therapist might not have been able to – maybe because it’s a bit more blunt and pragmatic.”

It can’t necessarily be said of every wellbeing guru, but Knight certainly talks the talk. At the very least, she appears to be living her best and most serene life: we Skype from her home in the Dominican Republic, which she shares with her husband Judd.

Previously Knight had worked for 15 years as a book editor in New York on titles such as Gillian Flynn’s Dark Places and Jessica Knoll’s Luckiest Girl Alive, though curiously had worked on zero titles in the self-help category.

Yet the road from there to here didn’t necessarily run all that smoothly. The death of a childhood friend reminded Knight and her husband that life can indeed be short, but pulling the ripcord on a successful career, and a career where Knight’s personal identity was tied to her professional success, wasn’t initially without trauma.

“When I quit my job, I had so much more creative energy,” she recalls. “I read the Marie Kondo book [The Life-Changing Magic of Tidying Up] and walking down the street, I had an idea to write something about not giving a f**k and the idea of doing a de-cluttering popped into my head. It was a combination of inspiration and then having the mental space to get it done.”

“It” became the publishing hit of 2016, The Life-Changing Magic of Not Giving a F**k. On the surface, the book was a parody of Kondo’s decluttering instruction tome, but at its heart was a message that many evidently needed to hear.

Whether by dint of timing or tone, Knight’s book enjoyed a definite moment, offering readers the tools to free themselves from social obligations they didn’t want to fulfil and friendship ties that were more hindrance than help. A year later, a similarly irreverent title, Get Your Sh*t Together, enjoyed equally healthy sales. Each one is breezy and banter-heavy, shot through with warm humour and colourful language. And, as Knight notes with pride, her latest book, Calm The F**k Down, has “surged ahead” in terms of pre-orders, making her into something of a self-help behemoth.

“I feel like the books are sort of a representation of me talking through all of this stuff with myself, and sitting down and going, ‘How do I explain to others how to do it?’” she explains, referring to its conversational tone. “These are basically me convincing myself and reminding myself of certain truths,” says Knight.

Chief among the book’s core philosophies is how to control the things you can and let go of the things you can’t. When it comes to worrying or stress, Knight advises on how best to harness that stressful energy, so that real problems are dealt with appropriately and effectively. One can spend their “freakout funds”, she says, in a good or bad way: “If a storm is coming, you can panic, or punch a wall, or you can batten down the hatches and start boarding out the wind,” she says.

And, in a social and cultural climate where every microagression and online skirmish can escalate into a weapons-grade hostility, Knight writes about knowing the difference between “relatively painless sh*t”, “tedious sh*t”, and ‘really heavy sh*t”. Among the spirited chapter titles are “This is Your Brain on Puppies”, “The More the Hairier” and “That Was Not a Chill Pill”. Deepak Chopra, this ain’t. But sensible and deceptively grounding, it very much is.

The fitness community, Knight observes, tend to rub along particularly well with her approach: “I think – and this is just my personal thought – that they’re used to being told what to do in an aggressive manner, like in a Soul Cycle class,” she notes. “I think they just like the way I deliver my message.”

Deepak Chopra, this ain’t. But sensible and deceptively grounding, it very much is

Knight’s own anxiety reached a worrying zenith in her 30s, right before her move to the Dominican Republic.

“I just really don’t freak out about the little things anymore,” explains Knight. “The objectively small things were making up 75 per cent of my stress. Pretty soon I was able to draw the line between things I could control and the things I couldn’t. I used to live in New York and commuted on the subway, and the trains would be late and you’d get stuck. Not being able to let people know I was late for a meeting, for instance, would send me into a panic. But now, I will be driving and find myself behind a herd of cows, and I think, ‘well, okay, I can’t control it’. It may sound like a small thing, but it became a major switch in mindset.”

And it’s these small switches that add up to a tangible upswing in mood, wellness and energy levels. Most of it sounds like basic common sense, but Knight has noted that many readers need a reminder of the basics from time to time.

In writing the book, Knight was also particularly mindful of the effects of social media on rising rates of anxiety and stress, not to mention an increasingly uncertain political climate: “You’ve got one, two, three megaphones in front of you the whole time, and even if you’re tired with Facebook and Twitter, you’re reading rolling news the whole time,” she observes.

“As I say in the book, I don’t think there’s more terrible news in the world, but we’re more connected and have reams of information coming at us all the time. People need someone to tell them it’s okay to walk away from the updates and the bad news. I still do a little bit of this [news watching] myself, but I put the phone down and walk away. Just because I don’t want to be confronted with the information doesn’t mean I’m uninformed or apathetic.”

Another book is already in the works: an in-depth manual on saying no. “I’ve already written the book on when to say ‘no’, but people have said, ‘well how do I say no?’ To a lot of people, it’s a big problem.”

Knight’s fanbase is swelling with every book release. Surely there’s scope for a wider, no-nonsense wellness movement involving apps, podcasts, seminars? Perhaps, says Knight, but she won’t be the one at its vanguard.

“For me, I’m not looking to add more productivity to my life,” she asserts. “Part of the last few years has been about simplifying my life and making it more about what I want it to be.” Proof positive, at least, that the best self-help authors can heed their own advice.

Sarah Knight’s book Calm The F**k Down is out now via Hachette.