This week showed why the internet is a poor place for a car show: cars need tactility 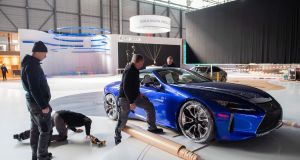 Workers at the Geneva International Motor Show, which was cancelled due to the Covid-19 epidemic. Photograph: Richard Juilliart/AFP via Getty

With most of the world’s big motor shows on the critically endangered list, it seemed that the cancellation of the Geneva motor show this week – one of the biggest and most globally significant – might be the final Covid-19-laced straw.

Actually, though, it turned out rather the other way around. With the world’s car makers carrying on with the revealing of sundry new models, but having to do so entirely online, this year’s Not The Geneva Motor show demonstrated just why motor shows are actually so important – cars need tactility.

That’s perhaps best illustrated by BMW’s Concept i4. Bar some details and small changes, this car will go on sale in 2021, as a 600km-range electric rival to the likes of the Tesla Model S.

To call its styling controversial is to undersell it. Normally we’d have been able to inspect it up close, and see the way the light falls across it, and how the shapes change with perspective. Virtual reality can’t quite replicate that yet – with cars, pixels only tell you part of the story.

Car makers have for years been biting and chewing the hand that feeds them by undermining the whole point of motor shows because they can’t stop releasing images, titbits of information and sometimes entire data sets ahead of the big show day.

This week proved why the internet is a poor place to hold a car show. Not least from a journalist’s point of view – it’s much harder to hold a chief executive to account on a conference call than it is when standing face to face.

Perhaps it would be worthwhile to end on a note on investments. After all, that’s the point of a motor show, whether physical or virtual – to get you to part with your hard-earned cash in return for some shiny new lump of metal, carbon and plastic.

According to JBL Investments, the best money that you could sink into a Geneva show star would require a little time-travel. In fact, you’d have to go back to the 1949 show and invest £3,000 (in 1949 sterling) into the Porsche 356, which was launched at the Geneva show that year.

Since then it has gained – wait for it – 26,566 per cent in value, with a perfect original now worth about €1 million. We wonder which of this week’s internet star cars will pull off a similar financial trick come 2071.

Living with illness: ‘I was told to go and spend time with my family’
6

Coronavirus: How to keep your car a safe haven during the crisis
10