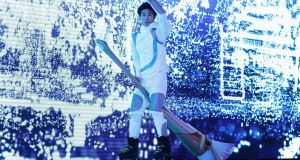 Under its newly enthroned emperor, Naruhito, Japan has entered a new era - Reiwa meaning beautiful harmony. It’s a suitable aspiration for its auto industry, as it tries to remap its future and adapt a model of business more focussed on mobility services rather than churning out more metal.

At a motor show that dabbled in displays more akin to those of the CES consumer electronics show in Las Vegas, there was a common thread running through all the corporate storylines at Japanese auto brands. The former loom makers, who turned their attentions to making cars, are now having to turn their attentions to tech. Specifically, their focus is on mobility, but that’s such a wide gambit it’s hard to say where their remit starts or stops.

Take Suzuki, which alongside Mazda will mark a centenary in business next year. Both began with looms and are now having to adopt battery packs in their cars and create all-electric cars. Suzuki is testing more fundamental mobility in the form of robots that look like rollator chairs for those with limited mobility. The chair follows you around behind.

At Toyota a vast array of mobility devices start with devices that clip on to wheelchairs to temporarily convert them to electric power - with speeds up to 10km and a range of 16km - through to Segway-like three-wheelers you can scoot around on while standing up.

Toyota’s boss Akio Toyoda embraced the new era most warmly of all the executives, invoking his cartoon caricature Morizo to spell out a future that also includes mobile services, in-car personal assistants and autonomous public transport to name just a few. The company showcased its prototypes against a backdrop of new tech that promises to gauge your emotions while driving and interact with you to prevent issues cropping up.

One example given was that the car would spot you were getting tired and, realising it was still some distance to a safe rest spot, engage you in a conversation about your favourite sports team to keep you mentally active until you got there. Alongside this was the chance for car’s to monitor your state of physical health and create a deep database of your information. All very positive for the tech engineers dreaming big, but all a bit Big Brother for the rest of us.

The idea of creating a deeper bond, for want of a better word, with your car is likely to result in owners keeping their vehicles for much longer and simply updating software. For those who don’t simply avail of future car sharing operations, ownership periods will be longer, predicts Toyota’s chief technology officer, Shigeki Terashi. Ultimately that means car giants like Toyota will not have to produce so many new cars every year.

By far the weirdest moment of the show was Akio Toyoda introducing the company’s e-broom. In a Harry Potter moment suitable for Halloween, a man appeared wearing roller-skates and holding what looked like a stick with an electric wheel at the the end that propelled him around the stage. We didn’t manage to get any further details on what could well be the ultimate follow-on to the current e-scooter craze. “It doesn’t fly. Yet,” Toyoda told an audience trying to come to grips with the enormity of the changes underway at the car giant.

As to the actual new metal on four wheels, Tokyo motor show as Toyota, Mazda and Lexus became the latest converts to the all-electric format. Mazda showed off its new MX30 electric crossover, coming to Europe next year. However, with a range of just 200km it’s going to have a limited appeal to Mazda’s loyal rural buyers. Toyota, meanwhile, has already confirmed it will introduce two fully electric vans next year. The Proace and smaller Proace city will both come as fully-electric versions.

At Lexus, it’s first all-electric vehicle will arrive next year as a version of one of its current models, to be followed by an all-new fully electric model in 2023. Staying loyal to its faith in hybrid, however, it will add six more of those - in regular and plug-in formats - over the same time period.

Nissan, which introduced its electric Leaf to the world a decade ago, used the show to pitch out a new all-electric crossover, in concept form. The Ariya is expected to make it through to production, though the chances of that car being built at its UK plant in Sunderland will likely depend on Brexit. Measuring in at 4.6 metres, it’s more squat than the typical Nissan crossover SUV, though it remains to be seen if that makes it all the way to production. The electric underpinnings are new, with two electric motors delivery all-wheel drive and will be shared with Renault and Mitsubishi, its alliance partners.

The coolest car of the show was the Suzuki Waku Spo, a concept with a “waku waku” button that lest you switch the cars’s body shape from little coupe to little estate car by retracting the estate part of the roof. A plug-in hybrid in concept form, it’s the cutest car in a long list of cute little city cars at the show.

Sticking with small cars, the big news from Honda is the new Jazz, which is hybrid only, with a similar dual-motor system that’s in the current CR-V, although with a 1-litre or 1.5-litre engine. Known as the Fit in Japan, it’s not radically different from the current car, though it does feature a new split front pillar to improve visibility, while a focus on seating makes the car both roomy and comfortable.

Finally at Subaru it seemed like a travel back in time as the company launched a prototype of the next generation Levorg, a family estate with a new 1.8-litre petrol engine. Nope, not a plug in sight. There was talk of horsepower, torque and transmissions. It was as if the magic broomstick had worked a spell.

Unfortunately for the Japanese executives, it won’t fly and neither will the idea of sticking with past formats for the vehicles and the businesses. The Japanese loomers who became car giants must now become key players in every facet of mobility. The Tokyo motor show demonstrated that several are ready for the new Reiwa era.