Smart tyres: The rubber on the road is about to get a lot more sophisticated 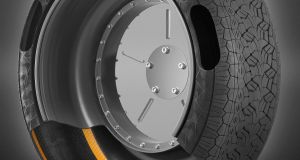 In the midst of a connected world, the internet of things and devices that let you track your cat’s every move, smart tyre are coming. We shouldn’t really be surprised.

Tyre giant Continental has showcased a concept tyre that features tiny sensors embedded in the ContiSense tyre carcass that inform the car of the tyre’s health. Data on its current temperature, the air pressure inside the wheel and a number of other readings will help drivers pre-empt potential tyre failure.

The entire tyre will also behave like an electrical circuit and will be able to detect and alert the driver to events like the moment its surface is penetrated by a nail for example. At present, new cars feature a valve based tyre pressure monitoring system that informs of a drop of pressure in the tyre. These systems are not foolproof and can give false readings in temperature extremes. Also, they only react after a loss of pressure.

An intelligent tyre can give the driver instant information to a potential puncture that may otherwise take a few hours to go flat. The key to the pioneering technology is a conductive filler compound. The tyre contains three layers, two are conductive and one isolating. Tread depth can be constantly monitored along with general tyre health and this is where the economic argument kicks in. Commercial vehicles and fleet users rely on their vehicles being roadworthy and delays due to puncture can cost thousands in lost revenue. Drivers have the biggest impact on tyre wear, according to Continental and fitting smart tyres would appear to be a no-brainer.

Meanwhile, the recent focus on electric and autonomous vehicles has further shifted tyre demand to newer forms. Electric vehicle design favours tall skinny tyres on large diameter wheels. Continental has been developing a tyre and rim combination that can be all tyres to all cars.

ContiAdapt can literally shape shift. Depending on the dynamic requirements, the rim and tyre with the press of a button can adapt to be wide or skinny and self inflate and deflate to make a multitude of footprints on the road surface. In eco mode the tyre is pumped hard and the wheel contracts to be skinny, this reduces the tyre’s tread footprint and drag is minimised. Three more modes end with a wide low pressure tyre shape that produces lots of traction and would be perfectly suited to off road or slippy conditions.

The boring old tyre is going to play its part in the motoring revolution that’s underway. At present Continental has over 139 different tyres currently in development specifically for electric and hybrid cars. That’s on top of its ongoing developments for the current fleet of cars on our roads. Connecting the rubber on the road with the car’s tech is about to get a lot more sophisticated.