Skoda Kamiq: This hatchback has earned its SUV stripes

First Drive: Call it what you like, but this is a well-built, smart and practical family car 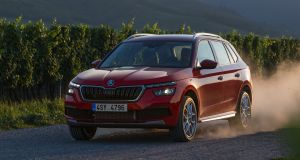 Skoda Kamiq: a fine family car, well-built, sturdy and with room for two adults in the back, all powered by a perky little three-cylinder 1-litre engine 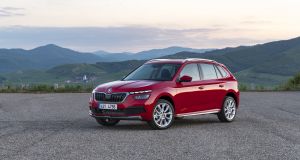 The Kamiq is narrow enough to navigate tight shopping centre car parks without a problem, yet roomy enough on the inside that things never feel cramped 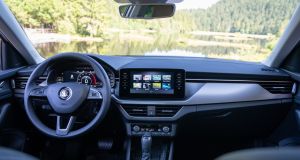 A selection of touchscreen options are offered, with perhaps the best mix being the mid-range 8-inch system 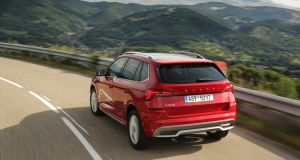 Big-sellers such as the Hyundai Kona, Renault Captur and Dacia Duster will continue to dominate this market for now, but Skoda can put up a sizeable challenge if the price is right

We’ve come full circle in the SUV craze. Where once the abbreviation defined misplaced off-road work vehicles dressed for suburban shopping runs, it has now lost all meaning, epitomised by the new Skoda Kamiq.

This is a family hatchback in everything but name, yet the Czechs are billing it as the final part of its trio of SUVs.

In fairness to Skoda, it can’t take the blame for this misnomer. Across the VW Group, of which it is an integral part, small family cars are being hoisted into the air and adorned with toughened plastic.

So this, apparently, is a city SUV, begging the question no one seems able to answer: Why?

Yet the answer is actually not important at all. For what has happened is that Skoda clearly spotted that at this stage the SUV king has no clothes. The abbreviation has become so washed out and overplayed you don’t actually need to bother sticking ugly plastic moulding on the outside of the car, or raising its ground clearance much above a regular car. Just simply saying its an SUV seemingly makes it so.

Which is a fine game of wordplay by the ever-successful Skoda folks, for the Kamiq deserves to catch the public’s eye. And we can grumble about the terminology all we want, but billing the Kamiq as a family hatchback would do it a disservice in terms of sales. If it gets more bums onto test car seats then Skoda can call this a supercar if it wants.

The reality is that this is a fine family car, well-built, sturdy and with room for two adults in the back, all powered by a perky little three-cylinder 1-litre engine in either 95bhp or 115bhp format. There are other engines on offer – a 1.5-litre 150bhp petrol or a 1.6-litre 115bhp diesel – but unless you are doing big mileage we wouldn’t see the point of either. The 1-litre is a great all-rounder. For suburban driving or commutes – which is what this car is really for – we’d be tempted to move up to the 115bhp version of the 1-litre just to get the DSG automatic transmission, but if you don’t want to spend the extra cash, the 95bhp 5-speed manual does the trick.

To prove the point we pitted it against the corkscrew country roads that climb the Vosges mountains of Alsace. The conditions should have had the little engine screaming in high revs, yet the mix of soundproofing in the car and remarkable torque kept us climbing. Even on the level tarmac, across the valley floor towards Strasbourg, the 1-litre impressed. True, the 1-litre isn’t exactly racy, but we slipped it into third gear and from revs below 1,000rpm all the way to nearly 5,500rpm it neither spluttered nor screamed. It was like driving an automatic, for good or ill. Still, that’s impressive for such a small car, loaded down with two hefty Irishmen aboard.

To determine its credentials as an SUV we did leave the official route for a little offroad excursion, and while it did justify Skoda’s claim the Kamiq boasts the largest ground clearance in its segment, this was on little more than a rutte laneway. You will not be climbing many mountains in this car.

In terms of space, the Kamiq is narrow enough to navigate tight shopping centre car parks without a problem, yet roomy enough on the inside that things never feel cramped. The steering is perhaps a little too light – even in sports mode – to be engaging, but that’s a boon around town and it also makes it a relatively relaxing drive on longer runs.

The good news continues in the boot, with 400 litres on offer, along with a smart reversible floor mat that has rubber on one side and carpet on the other. Flip down the rear seats and the Kamiq’s load-lugging ability reaches 1,395 litres. Once again Skoda proves itself supreme at maximising practicality.

That’s combined with an overriding sense of quality throughout the fit and finish of the interior. A selection of touchscreen options are offered, with perhaps the best mix being the mid-range 8-inch system.

So what we have here is a well-built, smart-looking family car that offers plenty of practicality and a lovely little petrol engine up front. It also boasts enough tech to keep any smartphone owner content.

What we can’t discuss yet is the price, for Skoda has yet to confirm what it will cost when it lands. And in this mainstream family market, price is key. As a rule of thumb, it needs to start below €20,000 to compete against rivals like its cousin the Seat Arona. Big-sellers such as the Hyundai Kona, Renault Captur and Dacia Duster will continue to dominate this market for now, but Skoda can put up a sizeable challenge if the price is right. Expected sales of over 600 should be easily achievable.

Skoda is on to a winner with the Kamiq if it can get the price right. Or rather, another winner, for the Czech-based car brand is fast becoming an established top five player in the Irish car market, with its sights set on overtaking Ford for fourth place by the end of this year. And whether you regard the Kamiq as an SUV or a family hatchback, it’s got the potential to turbocharge that sales push.