Ford could recreate flagging Mondeo as a crossover 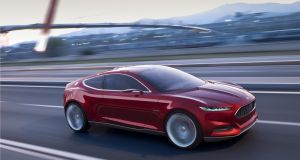 Ford’s concept crossover. The company says it will be ‘adding to our product line-up and by 2020 we’ll have the freshest showroom in the industry’.

A demise, as Mark Twain once said, can often be greatly exaggerated. Ford has been taking the scissors to its “conventional” vehicle line-up, both in Europe and the US as it seeks to pivot itself into a maker of crossovers and SUVs.

In the US, the change is more or less total. Aside from the Mustang coupe, in the next couple of years Ford’s US line-up will become entirely SUV and crossover based. “This doesn’t mean we intend to lose those customers,” Ford’s chief executive, Jim Hackett told investors. “We want to give them what they’re telling us they really want. We’re simply reinventing the American car.”

Ford’s executive chairman, Bill Ford jnr, said: “I wish the coverage had been a little different. If you got beyond the headline, you’ll see we’re adding to our product line-up and by 2020 we’ll have the freshest showroom in the industry. The headlines look like Ford’s retreating. In fact, nothing could be further from the truth.”

As the car market continues its lurch towards SUVs and nothing but SUVs, the Mondeo, S-Max, and Galaxy have seen their European sales plummet in recent years. Where once the Mondeo was a cornerstone of Ford’s success, now it’s looking increasingly like a millstone. And while it’s already been noted that Ford’s UK bases could face further pain in the wake of a botched Brexit, those working at the Valencia plant where the Mondeo, S-Max, and Galaxy are built will be looking nervously at their employment chances. Ford has already announced the death of the smaller C-Max MPV and has confirmed that it’s “looking at all options” with regards to its other passenger car models.

With the C-Max and B-Max MPVs already gone, and new SUV models such as the third generation Kuga, and a new Puma-badged crossover incoming, it seems as if Ford is going to give the bullet to all its non-SUV cars in Europe too, save for the Focus and Fiesta.

The Mondeo, whose sales have been decimated and then some in the past decade, seemed to be at the top of the chopping block list. But while it seems likely that the saloon and estate Mondeo will die (especially once production of its US-market twin, the Fusion, ends this year) there is a chance that the name might live on.

Ford has registered the Mondeo Evos name for use in Europe and Australia, which is a potential indication that it intends to create a new model with that badge. Well, not entirely – it could be that the name has simply been registered to prevent a rival carmaker using the same name, as happens quite a lot, but the potential is certainly there.

What is Ford's next move?

The Mondeo Evos name comes from a 2011 concept car shown at the Frankfurt motor show. Aside from the wild gullwing doors, it pretty closely previewed the frontal styling of the current Mondeo. But there’s more, the Evos had a chunky, square-edged, fastback look, one that with a few inches of extra ride height would potentially translate perfectly into an SUV and a replacement for the just-cancelled Ford Edge.

On top of which, in its registration, Ford has said that it’s intended for use on “motor land vehicles and electric vehicles, and parts and fittings and accessories therefor”. While Ford has said that it will co-operate with VW to produce electric cars in Europe, using Volkswagen’s MEB electric car chassis, it will also have its new Mustang-inspired Mach 1 electric car – a wholly Ford-designed creation, with a battery platform that’s good for 500km. Is it possible that Ford is planning a Mondeo Evos-badged European electric crossover, based on that platform as a way to potentially spread the cost of development?

One thing may hold it back from doing so. According to Autocar, the market for SUVs without premium badges is starting to slide alarmingly – down 18.9 per cent in the first quarter of 2019 as a proliferation of crossover models from Audi, BMW, Mercedes, Land Rover, and Jaguar takes hold. Wading into that, even with an electric model, may be a step too far for an already beleaguered Ford. The company has confirmed that as many as 12,000 jobs will be lost from its 53,000-strong European employment base as the US carmaker chases elusive profits from its European operations.

Ireland will not be immune to these cuts. The loss of some 33 jobs has been spoken of here and the closure of offices in Cork has not been ruled out as part of Ford’s Europe-wide restructuring.