Ten seconds and your car is gone 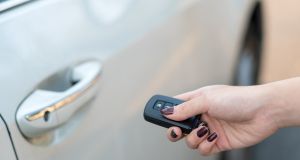 Now you see it, now you don’t. Most of the keyless car thefts take place outside the homes of the car owners

Criminals using the latest technology can be into your car within 10 seconds, and have it driven away. That’s the claim of the UK magazine What Car, which has tested seven of the latest models that feature “keyless” entry and ignition systems. The Irish Times reported on the vulnerability of such systems earlier this year, but in spite of there being a relatively simple off-the-shelf solution, car makers are continuing to build this open door into their electronic systems, which is being exploited by criminal gangs.

Steve Huntingford, editor of What Car, says: “It is outrageous that some car makers have introduced keyless entry and start systems without making them anywhere near as secure as the traditional alternatives they’ve replaced. It is great news that a small number of brands are taking the problem of car theft seriously, but more needs to be done to improve security, particularly of desirable used models.”

The worst performing car in the test was the new DS 3 Crossback, a luxury compact crossover, built by PSA Group’s French-based premium brand. What Car’s security experts were able to enter the DS 3 in just five seconds, and five seconds later had the engine started and the car driven away.

The Land Rover Discovery Sport was also found to be highly vulnerable, with the experts being able to open the door and enter the car within 10 seconds, and have it driven away 20 seconds after that.

The Audi TT Roadster was also proven to be vulnerable – and could be driven off within 10 seconds – but it, in common with the rest of the vehicles in the test, comes with a switchable smart key. Turn off the keyless entry system, and the key and vehicle stop communicating wirelessly with one another, removing at the flick of a literal switch the vulnerability. With the key switched off, the TT couldn’t be entered, and nor could it (obviously) have been driven away.

Some car makers are introducing motion detectors in their keys, so that they won’t send a signal to the car if it’s lying on table in the house

Most of the keyless thefts take place outside the homes of the car owners. Thieves simply use electronic eavesdropping devices – available for as little as €3,000 – to read the signal going between the car and the key inside the house, and then use that to open and start the car. Some car makers – such as Audi, BMW, Ford, and Mercedes – are introducing motion detectors in their keys, so that they won’t send a signal to the car if it’s lying on table in the house, while others – such as Jaguar Land Rover – are trialling ultra-wide-band signal systems which are harder for the crooks to lock on to.

The simpler solution, by far, would seem to be to just not install keyless entry in the first place. Speaking of simple solutions, the Garda Síochána advised The Irish Times to revert to old-fashioned methods to deal with the rise in keyless car crime. “Do not leave your car keys on open show on hallway tables etc,” said a Garda spokesperson.

“The wireless signal from some keyless fobs can be turned off, although the feature isn’t always obvious and can require a combination of button presses. Consult the manual or contact the manufacturer to find out if this is possible for the keys to your car. There are also tracking devices available which enables the owner to track their vehicle. A low-tech security device like a steering wheel lock, gates, and a security barrier, are very good deterrents to would-be car thieves. Always stick to the basics of car security first. Ensure your vehicle is parked in a well-lit or secure area, properly locked and all valuables are removed. Once in your home or office, ensure your car keys are as far away from doors and windows as possible, preferably shut inside a drawer.”