Why we should ban autonomous cars now

Silicon Valley tech is about making money, not saving or improving lives 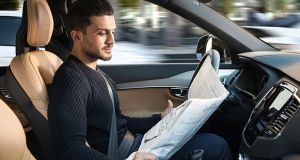 Major car makers are chasing a purported €300-billion pot of autonomous gold, the predicted level of cash to be made from autonomous car services by 2030.

I’m not a Luddite. I would not have been among the angry mob throwing their wooden shoes (known as sabos, hence saboteurs) into the workings of weaving looms at the beginning of the industrial revolution. I have no intention of living off-grid.

The more I think about it, though, the more I really do feel that we should ban autonomous cars before the problems start to mount up. I realise that this is a radical view, but let me explain further.

Technology, and the advancement of such, is supposed to be beneficial to us, to free us up more so that we can have time. Time to relax, time to entertain or better ourselves. It has been the trajectory of humankind since the stone age, developing tools that make our lives easier. Expanding leisure time until it becomes a right in itself. Improving our lives. I’m fully in favour of such things.

Originally, autonomous cars looked like both a good and inevitable idea. Computers are better at doing things than humans, so all we had to do was to teach a computer how to drive, slot a line into the programme that reads 10 GOTO DON’T CRASH and off to the autonomous races we go. Right?

For a start there is a plethora of unintended consequences, not least the employment aspect. In the immediate line of fire, there are the many millions of taxi drivers around the world. Old-school professional cabbies are rapidly being replaced by the likes of Uber and Lyft, which you might think is fine. The trouble is that the likes of Uber and Lyft have plans to replace their human drivers with robots in the near future (and more immediate plans to just not treat their human drivers like actual humans, but that’s another issue entirely) so unemployment beckons for many. Ditto those involved in the haulage and transport industries.

José Viegas, secretary-general of the ITF, said: “Driverless trucks could be a regular presence on many roads within the next 10 years. Self-driving trucks already operate in controlled environments like ports or mines. Trials on public roads are under way in many regions including the United States and the European Union. Manufacturers are investing heavily into automation, and many governments are actively reviewing their regulations. Preparing now for potential negative social impact of job losses will mitigate the risks in case a rapid transition occurs.”

But wait, there’s more. Take a look this week at the numbers coming out of major car makers. Ford has announced huge losses, mostly to do with the costs of laying off thousands of employees around the world, so that it can then turn around and invest in new tech, including autonomous cars.

Nissan is likewise in dire straits, looking to cull as many as 12,000 people worldwide as its profitability plummets. Jaguar Land Rover, in spite of being two of the most iconic brands in motoring, can’t seem to catch a financial break of late. Even supposed safe-houses such as BMW and Mercedes are now issuing profit warnings and speaking of the need to cut costs to reinvest.

Not all of that is down to autonomy – some of it is down to old-fashioned falling sales in key markets (China, especially), some to market jitters over the fallout of Brexit or Trump’s trade wars, or whatever. But there are untold billions being spent on autonomous car research around the world. Around the world means right here in Ireland, where the likes of Jaguar Land Rover Valeo, and IBM are investing significant sums in autonomous research.

The thing is, it might not even be worth the effort. A recent report by tech website The Information found that General Motors (which recently went through its own employee cull so that it could free up cash to invest in new tech) has decided to delay the introduction of its Cruise autonomous taxi service, because the cars aren’t safe enough. The test cars were having what was called a ‘critical safety event’ (one where the human supervisor has to – rapidly – take control to avoid an accident) every 600km or thereabouts. That’s pretty poor, even compared with fallible humans.

One autonomous car expert, when presented with the fact of Uber’s self-driving test car killing a pedestrian in Arizona last year, shot back with; “Yeah, but how many people were killed by cars driven by humans that same night?” Well, yeah, but equally, proportionally, how many autonomous cars were on the road that night? The statistics don’t look good.

Equally, when EuroNCAP tested the supposedly autonomous driving systems of several major cars, Tesla especially, they were found lacking, not least in the fact that they purported to be fully independent systems, when actually they utterly rely on the timely intervention of an alert driver.

Oh, and let’s not forget the overriding reason for commitment to the autonomous cars – money. Forget any altruistic promises of safety, Google is developing autonomous tech so that instead of driving, you’ll sit their in your pod car surfing the web. Major car makers are chasing a purported €300-billion pot of autonomous gold, the predicted level of cash to be made from autonomous car services by 2030. In the meantime, they’re prepared to torch their headcount lists to make up the investment funds. And don’t even get me started on the privacy implications.

Even the high priests of the autonomous car world, such as Anthony Levandowski formerly of Google and Uber, are now starting to admit that robotic cars may be, for some decades yet, limited to specific, controlled areas, and at very low speeds. Some are now even saying that it may never be possible to train a robot to drive, in all conditions and on all roads, with the skill of a well-trained human. Some car makers, Mazda notable among them, have also found that most car owners don’t want control to be taken away. Help, sure. Assistance, yes. But total robotic control? No thanks.

So, in other words, we might be going through all this pain, all this employment blood-letting, all this vast expenditure, for nothing. For a box on wheels that can trundle you autonomously around as shopping centre car park, but little else.

So, let’s just not. Let’s just draw a line in the sand and say we won’t bother. We don’t need them anyway. Volvo has already developed a car (the XC90) which is so safe that, according to research, not a single occupant of one has been killed in a crash yet. The XC90 is packed with electronic driver aids, but it’s a long way from being an autonomous car. We stepped back from supersonic aviation when we realised that it was too expensive, too noisy and too damaging to the environment. That was a shame, and I mourn the loss of Concorde, but I’m starting to think that’s what we should do with autonomous cars too. The gain ain’t worth this pain.