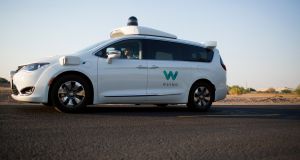 The Alphabet unit, which began life a decade ago as Google’s self-driving car project, said it hoped the release would fuel research into self-driving technologies by adding to the body of data that could be drawn upon

In a bid to shorten the lengthy process of teaching cars to drive themselves, Waymo announced on Wednesday that it would make “the largest fully self-driving data set ever” freely available to the research community “in the hope of accelerating the development of machine perception and self-driving technology”.

The Alphabet unit, which began life a decade ago as Google’s self-driving car project, said it hoped the release would fuel research into self-driving technologies by adding to the body of data that could be drawn upon.

Its data, collected using cameras and sensors on Waymo vehicles in a variety of environments and road conditions, include 1,000 high-resolution driving scenes that have been “painstakingly labelled” to indicate the presence of 12m objects such as pedestrians, cyclists and signage.

Labelled data are vital to the development of self-driving algorithms, which must be “taught” to interpret the world around them by being fed millions of examples.

As Waymo is widely considered to be the most advanced company in the self-driving technology space, the move is likely to be seen as a concession that its go-it-alone approach is falling short of sky-high expectations.

Banks such as Morgan Stanley and Jefferies have valued the unit at $175bn and $250 billion (€225 billion), respectively - multiples of the world’s largest carmakers - on the belief that it could soon disrupt the notion of car ownership and offer a driverless Uber-like service in the world’s big cities.

In a briefing to journalists on Tuesday, Drago Anguelov, Waymo’s head of research, pushed back against the idea that the release was a concession. “It’s not an admission, in any way, that we have problems solving these issues,” he said. “We felt, and it was not just us...that the field was currently hampered by a lack of suitable data sets.”

Vijaysai Patnaik, product lead at Waymo, said: “The fact that Waymo and other folks are releasing the data set is not so much about, ‘Hey, the problem is so hard, let’s just pool our data’; it’s about how we empower the research community for whom it’s really hard to get access to data sets like this.”

The call for academic help comes as many self-driving experts rein in expectations of when robotaxis will become a reality. Cruise, the self-driving group owned by General Motors, last month postponed a rollout of the ride-hailing service it had expected to begin this year, saying more testing was required.

“I think there are some hard problems and elephants in the room, if you will, that many in the industry haven’t wanted to talk about,” Jack Weast, chief systems architect for autonomous driving at Intel, told the Financial Times in July.

The Waymo release marks something of a turning point for a company that is more vertically integrated than most in the field.

Waymo’s competitors have all announced partnerships with carmakers in recent years, underscoring the vast investment sums and technical challenges involved. Amazon-backed Aurora, founded by former Waymo technical lead Chris Urmson, is working with Hyundai and Kia, while Argo AI has partnered with Ford and Volkswagen.

But while Waymo orders vehicles from Fiat and Jaguar Land Rover and has announced international service deals with Nissan and Renault, it is “the only company that develops its entire hardware and software stack in house”, said Mr Anguelov. – Copyright The Financial Times Limited 2019

1 Fianna Fáil may have just pressed the pause button on the property market
2 UK to prioritise EU trade deal over one with United States
3 Who are Ireland’s 17 billionaires?
4 Are there annual limits on inheritances or gifts to a child?
5 Eason puts Blanchardstown store on market at €16m
Real news has value SUBSCRIBE