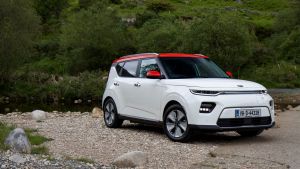 Kia e-Soul electric car: its big selling point is the new 64kW battery with an official range between charges of 452km.

I’ve always had a soft spot for the Soul. Kia’s boxy-looking hatchback chimes with the need to revamp the profile of the family car to give it a fighting chance against the fleet of competing crossovers.

Rather than simply take an SUV and resize it to supermini proportions, Kia broke with tradition and came up with a car that owes much of its styling cues to the quirky Asian city cars that for some reason aren’t offered up over here.

So with the provisio that I’m a sucker for the Soul, it was time to test its latest iteration. Not only is it funky and functional, now it’s also electrifying.

The styling on the regular car means the transition to electric – no need for a front grille – suits the look better than many rivals, which struggle to restyle the front nose of electric cars. Nissan do a decent job with the Leaf, but Tesla have made a bit of a mess of the Model 3. Some car companies give up and just leave the grille as is, hoping no one will mind the fact it’s a waste.

Truly Kia has some of the best-looking cars on the mainstream market right now. Match that up with a decent mix of engines and you can see why the car brand that languished in doldrums in the new car sales tables over a decade ago is now rubbing shoulders with the likes of Renault and Peugeot in the top 10. It’s not quite at the heady heights of Hyundai, its sister brand, but it’s doing well considering where it once was.

Back to the e-Soul and this is a proper family car with some funk. It’s spacious in the back – yes for three adults on a long trek – and there’s even a decent boot, albeit compromised by the battery pack underneath the floor.

The fit and finish of the cabin is at the better end of the spectrum for family hatchbacks, although we had problems with connecting our phone to the touchscreen system via Bluetooth. The entire screen also blacked out at one stage during our test.

But the core of this car’s allure isn’t going to be the funky styling, nor the spacious interior – it’s all about the power. The big selling point is the new 64kW battery that boasts an official range between charges of 452km. That might suggest the days of range anxiety are over, but just hold your charge for a second. There’s a world of difference between official figures and reality, especially if you spend a lot of time on the motorway. In reality, if you tightly police your right foot and maximise the energy regeneration then you can eek out over 400km. That’s a practical range for many motorists, particularly those who mostly run between work, school and home.

The other lovely feature about the e-Soul is the surprising pace. True, that’s a feature in virtually every electric car these days, but this one manages to lay a good deal of that speed on to the tarmac. Aside from the BMW i3, which is brilliant to drive, most other electric cars end up with wheelspin when you floor the accelerator.

The e-Soul also offers that wonderful one-foot driving trait that’s increasingly common with electric cars. Nissan makes much of its e-pedal innovation, effectively turning the Leaf’s accelerator into a one-pedal power switch: lift off and the car noticeably slows down. Anyone who has ever controlled a bumper car will be aware of this sensation. On the Kia roughly the same feature can be called up using the paddles at at the back of the steering wheel.

Of course there are issues with the recharging infrastructure in Ireland. The Government boasts about a network of almost 1,100 public charging points, but it’s on the trips across the State and through rural areas that you really realise the network’s limitations. And while some countries have apps that let you pre-book a charging point so you can plan your trip, no such facility is available here. Thanks to a mix of units that are out of service or blocked by non-electric parked cars, anxious moments are never far away when you are travelling outside the main towns in an electric car.

But that’s not the real issue prohibiting the mass adoption of electric cars, particularly in towns. If the public starts buying electric cars, it will be in the interest of forecourts, retailers and hotels to offer recharging stations.

What stops most people buying them is price.

The e-Soul starts at €35,995 after €10,000 of grants and tax rebates are taken into account. Even with those generous incentives, that’s more than most families are willing to spend on their motoring needs. The average price of a new car that’s bought in the Republic is about €20,000 and the average price of a car in the Irish market, including imports and used cars, is €15,000. So we are way off the affordability threshold for these cars as yet.

Add in the extra concerns about range and fears that resale values will suffer from the fact that newer models over the next few years will offer even better distances between charging, and you can see why many potential buyers are playing a waiting game.

Or alternatively, they are getting a sense of the electric future courtesy of plug-in hybrid models like Kia’s e-Niro. It’s starting price is €4,500 less than the e-Soul and though it lacks the looks and the character, it delivers a full electric drive for the first 50km or so, and then the chance to run it as a regular petrol-electric hybrid after that if you don’t have time or the facility to recharge it.

If you are ready – and suited – to take the electric plunge, then the e-Soul should certainly be on your shopping list. It delivers all the zip and new-age power of the rest of the electric car fleet, but with far more fun and individuality than the rest of the fleet – at least for less than €60,000.

Verdict: Our soft-spot for the Soul just got stronger