‘I just wanted to drive a little’: Eight-year-old takes car for 140km/h spin 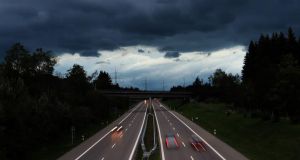 An eight-year-old boy has been found safe after taking his parents’ car for a 140km/h night-time spin down a motorway in Germany.

He tearfully told police he “just wanted to drive a little bit”.

The child, who had used go-karts and bumper cars before, took the Volkswagen Golf automatic from his home in Soest and headed towards Dortmund at high speed before reportedly feeling unwell 8km down the road and pulling into a lay-by.

The alarm was raised by his mother at 12.25am on Wednesday before she found him about an hour later. The boy had switched on his hazard lights and put a warning triangle behind the vehicle.

Police said the little boy’s adventure down the A44 had not caused any damage. – Guardian