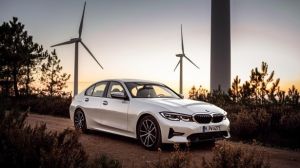 If a car buyer has the choice between a BMW 320d with diesel power, or a new BMW 330e with plugin-hybrid electric power, which one should they choose?

Right class, settle down. Get your calculators, a pencil and some paper out because today – we’re going to have a double session of maths.

Right, we’ll work down through this fairly lively now. If a car buyer has the choice between a BMW 320d with diesel power, or a new BMW 330e with plugin-hybrid electric power, which one should they choose? Remember to show your workings, and take the new tax changes into account.

What new tax changes? Lads, are ye all living under rocks or something? The Government in its wisdom is planning to increase the number of tax bands, add in extra taxes on nitrogen oxide emissions (ask your chemistry teacher on that one), and reduce the subsidies paid out for hybrid cars. But probably not plugin-hybrids, which this 330e is. Oh, and no one’s sure about what’s going to happen with the SEAI grant of €5,000 for buying an electric car or plugin-hybrid. I think ye’re going to need at least one Venn diagram for this one, maybe two or even three.

Right, I’ll make this one easier for you. As things stand right now, a new 330e, when it goes on sale in September, will cost €50,570 before you add in the SEAI grant and the rebate on vehicle registration tax. Once you take account of those, and I hope you’re writing this down, because I’m not going to say it again, that should bring it down to an on-the-road price of €43,070. Now, that’s about €1,000 less than the current base price of a 320d diesel.

Hold on there, hold on. Don’t get excited. All of that could change when the budget arrives in October. If the new tax bands come in the way they’ve been proposed, according to the estimates (and did Mr O’Brien cover estimating with ye last week? He did?) then the final list price, assuming a 7 per cent VRT rate for cars with Co2 emissions of under 50g/km, and also assuming (and you know what your English teacher says about assuming, lads) that the SEAI grant remains in place, then the final on-the-road price for a 330e SE or sport model should be… roughly the same. Although the equation (remember equations? We did them last month) changes again with the likely loading of a nitrogen oxide tax on the price of the 320d, plus that car’s emissions figure will go up significantly when the new WLTP emissions regulations take over next year.

Now, get your protractors out and we’ll work out some fuel consumption figures

It’s complicated, lads. Complicated. You’re going to need to go down to Eason’s and get one of those scientific calculators just to work out which is the best car to buy. But look, I’ll lay it all out for ye – the new 330e will cost, all being equal, about the same or less than a diesel-engined 320d, but will have more power. Loads more.

In fact, tie the 2.0-litre turbo petrol engine and the 83kW electric motor together, and use the maximum effect of the new XtraBoost’ system, and you end up with a system total of 292hp. That’s 40hp more than a 330i petrol model, and a full 100hp better than the diesel.

Now, get your protractors out and we’ll work out some fuel consumption figures. No, O’Malley, the protractor is the round one, not the pointy one. Now, BMW’s official claimed figures read like this – on the new, tougher, WLTP emissions and economy test, the 330e scores Co2 emissions of up to 41gkm, and as low as 31g/km if you go for the smallest 17-inch wheel option. Fuel consumption, officially, is 1.8-litres per 100km, which works out at 156mpg.

We covered 26km, and then switched over to hybrid mode with a claimed 19km left in the battery

Yes, lads, I know that’s pure fiction. I’m getting to that. Now, myself and the technology teacher took a new 330e out for a spin so that we could work all this out for you. It has a bigger battery than the old model (it’s now up to 12kWh) and BMW says it will cover as much 50km, in real-world conditions, on electric power with a full-charged battery. We covered 26km, and then switched over to hybrid mode with a claimed 19km left in the battery. Then we drove for another 60km, switching between hybrid and sport modes, and arrived with 1km range left in the battery, and total fuel consumption of 3.8-litres per 100km, which is 74mpg. Not bad at all, eh lads?

And I know, you’re all going to want to know, like the hooligans ye are, if you can drive the 330e, and the good news is you can. The car is about 200kg heavier than a standard 3 Series, but the centre of gravity – you remember we worked that out last year with the string and the lead weights? – is actually a little lower, and it still has 50:50 front:rear weight distribution. So, to be honest, you just don’t feel the weight – it’s as nimble, and as agile as the standard car, and has the same brilliant steering feel. So yes, it’s fun, big fun, even if you are trying to save the planet at the same time. It also looks the same as a standard car, as BMW has removed the old e-Drive badges from the back, so it’s only the 330e badge and the flap for the charging plug that give it away. The interior’s the same too, aside from some trick bits that show you more electric running displays in the big digital instrument screen.

Oh, and it’s smart, lads. Smarter than anyone in this classroom anyway. Put a destination into the sat nav, and the hybrid system will work out precisely how to maximise economy over your route, and even make sure you arrive at a city centre with battery power left for zero-emissions urban running. It can even recognise city-limit signs through the forward-facing camera, and switch to electric mode as it passes, and it qualifies for the new German Umwelt Zone low-emissions areas.

Right so, get cracking. I want to see your answers before the bell goes. And remember, show your workings.