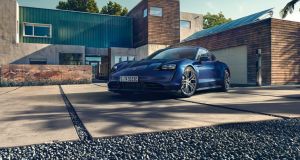 Porsche’s Taycan will likely set you back about €200,000 when it arrives in Irish showrooms 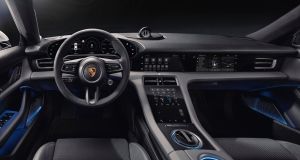 Inside, the cabin takes its design and styling cues from the 911 and Panamera, and has both a ten-inch central infotainment screen in the centre of the dash, and an optional extra smaller screen just for the front seat passenger.

Porsche’s first electric car launch will be primarily remembered for a disappointment. In spite of months, years even, of concepts, teasing, and a drip feed of information, the Taycan has been fully and officially revealed – in a three-way joint ceremony in Berlin, Toronto, and Fouzhou in China – with a one-charge range of 450km. Which, you’ll notice, is rather less than the 500km range originally touted for the model when it was first shown off as the Mission-E Concept.

In fairness to Porsche, that original Mission-E promise of 500km was made when everyone was testing cars to the lax old NEDC economy and emissions standard, whereas the Taycan’s range has tested accorded to the more rigorous WLTP remit, so it’s probably a more realistic range than the original promise. Nevertheless, it means that you can get as much range from a €35,000 Kia as you can from this hugely expensive Porsche.

Not that Porsche is holding back when it comes to flagging up the importance of this car to the brand. Speaking at the launch event in Berlin, Oliver Blume, Porsche’s chairman, said: “The Taycan links our heritage to the future. It carries forward the success story of our brand – a brand that has fascinated and thrilled people the world over for more than 70 years. This day marks the start of a new era.”

At launch there will be two models, called Turbo and Turbo S. Needless to say, there’s no actual physical turbo next or near any Taycan, but Porsche wanted to keep the model designations in line with the 911 and Panamera, so Turbo it is.

The “mere” Turbo develops as much as 680hp from its twin electric motors, while in “Launch Control” mode, the Turbo S can manage as much as 761hp, which will allow it to hit 100km/h from rest in just 2.8 seconds. The much more pedestrian Turbo takes a yawning 3.2seconds. Ahem.

The top speed of both is limited to 260km/h, but range will definitely be an issue. The Turbo claims a 450km one-charge range, while the Turbo S makes do with 415km. Long ranges, certainly, but rather short of the competition from Tesla. . .

However, what it lacks in range, Porsche says that the Taycan will make up in speed of charging. It’s the first electric car to be developed around an 800-volt charging system, which Porsche says makes it able to suck down an extra 100km of range for every five minutes that you have it plugged in. That assumes that you can find a DC fast charger capable of charging at 400kW, which is pretty rare. Porsche will supply a 22kW wall box for home charging (assuming your home power grid can handle that kind of punch) but even then, the big 93kWh battery pack will take some time to charge.

Design-wise, the Taycan is pretty much exactly as it was originally shown, when it was still called the Mission-E. A long, wide, low-slung four-door saloon, it’s a little smaller than the Panamera, and much roomier inside thanks to the superior packaging opportunities available to an electric car.

Inside, the cabin takes its design and styling cues from the 911 and Panamera, and has both a 10-inch central infotainment screen in the centre of the dash, and an optional extra smaller screen just for the front-seat passenger.

The “leather” interior isn’t actually leather at all, but follows Tesla’s lead in being made from recycled materials, while in the back, the battery pack has been specially shaped with divots so that rear-seat passengers have somewhere to put their feet.

Unlike most electric cars, the Taycan actually uses a two-speed transmission, with a low first gear for those blistering standing starts, and a higher ratio for more general driving.

“We promised a true Porsche for the age of electromobility – a fascinating sports car that not only excites in terms of its technology and driving dynamics, but also sparks a passion in people all over the world, just like its legendary predecessors have done. Now we are delivering on this promise,” said Michael Steiner, Porsche’s head of research and development.

Order books are open in Ireland right now, and you’ll have to find €160,000 for a Turbo, and €197,000 for Turbo S - both prices significantly higher than the cost of a Tesla Model S Performance model, which has more range.