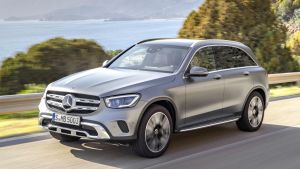 The 2-litre, 194bhp engine is quieter and more refined than its predecessor, but it’s also noticeably more responsive

To judge by the fleet of new model releases at Mercedes-Benz these days, you would think they had the midas touch, particularly when it comes to cashflow.

Yet like all the premium players in the market, this car giant is feeling the cash crunch, squeezed by falling forecourt sales in key markets like China and the US, while at the same time having to invest heavily in preparations for the electric and autonomous future ahead.

The challenges aren’t reserved for the Daimler boardroom. The same pressures are being felt at BMW and VW Group. The premium brands in particular are feeling the pressure, amid expectations that the higher end of the market should be pioneering the new tech.

It’s fitting, then, that the company of Karl Benz and Gottlieb Daimler, who gave us the first production car, should be in the mix of mainstream premium brands delivering on the electric car promise.

We test drove the EQC several weeks ago and it’s now available on the Irish market priced at a grant-inclusive basic price of €89,450, which Mercedes is keen to point out is “some €3,445 and €10,800 lower than its two main rivals”.

Yet that’s an eye-watering price for an electric car based on what is in effect built upon the highly modified underpinnings of the company’s current GLC mid-sized SUV.

The price reflects the challenge faced by all the premium players rolling out new electric models. Every tyre-chasing dog on the street knows the recipe for commercial success right now: an affordable fully electric family-sized SUV with a real-life range of 400km or so. Surprisingly, the range is increasingly not the biggest hurdle here; it’s the “affordable” bit of the equation.

As is evident on Irish roads, the motor industry needs to be wary of racing ahead of what is the current reality for most motorists. Plug sockets may be the future, but of the 2,106,369 private cars on our roads at the end of 2018, 99.9 per cent (2,101,544) sourced their power from a fuel pump.

And with the majority of the private car fleet six years or older (62 per cent), unless the Government plans a mass scrappage scheme that’s gifts owners tens of thousands of euros in incentives – on top of what’s there already – in order to bring the net cost of change for motorists closer to €20,000 or so, the sudden flip to electric is going to take some time. Not to mention the likely delivery issues, as initial supplies will be restricted.

Advising family about their car purchases can be a minefield: they know where you live

It all means that, for many buyers who rock up at a Mercedes-Benz dealership with electric dreams, their next car is likely to remain a choice of petrol or diesel. Which brings them neatly to the new – or significantly revised – GLC.

Faced with advising a family member about a mid-sized premium SUV purchase some time ago, after much consideration I opted to point them towards a GLC. It was a close-run contest but, with 12 months behind the wheel, there have been no complaints to date – which is a relief. Advising family about their car purchases can be a minefield: they know where you live.

So, getting behind the wheel of the new GLC last week, I was faced with two key questions: is it better than what was there before, and should I have advised them to wait?

The answer to the first question is yes, but by degrees. Overall, it feels tighter, as though everything has been screwed together with a firmer touch.

You sense it from the steering, which is sharper and more direct. You certainly feel it through the suspension, which doesn’t bottom out as easily on potholed roads or speeds bumps. That’s perhaps the biggest gripe about the outgoing model. In fairness, the test car was running on smaller 18-inch alloys, which helps in terms of comfort but just don’t look as smart as the 19-inch or 20-inch offerings.

Then there’s the engine. There was nothing really wrong with the current diesel powertrain fitted to the 220d versions, but this new 2-litre 194bhp block has already won plaudits in the C-Class and E-Class saloons, and rightly so. It’s quieter and more refined than its predecessor, but it’s also noticeably more responsive. Admittedly, there is little wrong with the 2.1-litre engine of old, but this one is just better. And when it’s started from cold, it’s far less rattling and rough.

The interior gets a makeover as well, with the turning knob replaced by a touchpad and sizeable touchscreen system first showcased in the new A-Class. It’s an intuitive system and certainly smarter than the dial-and-click system in the outgoing model. In the battle of the cabins, Audi has long claimed a lead, but the Mercedes infotainment system can rightly claim to have matched it these days, with BMW’s confused offering trailing a little behind.

So, despite the far-fetched targets set by the Government recently, many motorists will sensibly stick to the diesel and petrol options for now and wait for the arrival of more affordable premium plug-in models in five or six years’ time.