Lessons in Norse: Ramp up EV incentives if you want to go electric 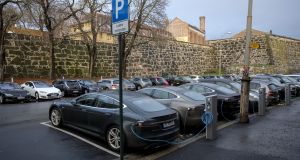 Norway’s electric car sales are rising like a rocket on maximum boost. The Scandinavian nation has for some time now been held as the talisman of the global electric vehicle movement, even though its total numbers of sales are not that huge. Chinese and US buyers purchase electric vehicles (EVs) in greater physical numbers, but in Norway it’s down to the proportion of sales.

As of this year 10 per cent of all vehicles on Norway’s roads are now battery-powered. Fifty per cent of sales, on average so far this year, have been electric and such sales hit a peak of 60 per cent of overall sales for the month of March. Tesla is the biggest-selling brand, outselling the mighty Toyota and Volkswagen by a more than two-to-one ratio. The push to sell only electric vehicles in Norway by 2025 is well underway.

So what can Ireland, with its own proposed date of 2030 for when we go all-electric in new sales terms, learn from the Norwegian model? Well, it can learn much, but perhaps not much that is palatable for either politicians nor car buyers. Erik Figenbaum is the chief research engineer at Norway’s Institute of Transport Economics and he visited Dublin to speak to the Ireland and Nordic-Baltic 8 conference at Iveagh House.

Chatting to The Irish Times after the event, Figenbaum pointed out that there are two keys to meeting your electric car goals - consistency and cash. “I think the most important lesson learned is that you need to set a target for where you want to go, when it comes to electric vehicles. And then you have to devise policies to enable you to meet the target, which usually means having some sort of incentive in place. I know you already have some incentives in Ireland, such as a grant for buying an electric car, but you may also need other sorts of incentives, ones that remove barriers when it comes to charging” said Figenbaum.

“What we see in Norway is that when you have incentives in place and a stable political framework, then you get growth in EV sales. We have extremely high incentives, of course, and so not all countries can have such strong incentives. That can be expensive and part of our income for our national budgets comes from the oil sector, so we have a little more freedom when it comes to providing these incentives. Most important though is the stable framework and the clear target, because then people know where the politicians want to go and how they want to get there. Businesses can plan, consumers can react to the incentives and things can get going.

“Inconsistency is a problem,” says Figenbaum. I think if you want to make changes, they should be advertised earlier, maybe you say two years from now we will start changing the incentives, not just doing it overnight in the national budget.”

That last seems almost a pointed criticism of how electric car incentives and motoring in general was dealt with in Ireland’s Budget 2020. While most electric car incentives were continued, new restrictions were placed upon plugin-hybrid grants, while the vehicle registration tax incentive for companies buying EVs was removed entirely. Just this week, new proposals were floated to give electric car users free parking in city centres and to allow electric cars to use bus lanes. This kind of tinkering at the edges, says Figembaum, is counter-productive. If you want to be like Norway, you simply have to pump the money in to get electric cars on the road.

“There’s a balancing act to find” he says. “The target and the policies need to match, so if you have very ambitious targets then the policies need to be equally so ambitious and incentives too. So, in Norway, the national target is that we should only sell battery electric cars from 2025. The market share this year is approaching 50 per cent. Now, that doesn’t mean that it will be very easy to reach the 100 per cent target, but maybe we can approach 70 to 80 per cent which would be a remarkable achievement. But we have a lot of taxes on cars and we have taxes on fuel and these taxes allow us to play around with the incentives structure so that it becomes very cost-effective for people to buy an electric car. And now they are buying them in large numbers and the cars are within the reach of a majority of buyers and households. In the present situation that requires substantial incentives, which as I say may be more difficult a path for some countries to follow, but I think if you stick to a stable policy then the time factor starts to work for you. That’s because over time you will get better and better cars from the car manufacturers, and then the incentives will work better and better over time.”

The bad news for those not currently thinking of going electric is that matching the Norway model is going to mean much, much, higher prices for “normal” cars. “Driving up taxes on internal combustion cars will make the policy more efficient, but then that will also make some of the politicians less popular. We have always had these high taxes on cars, so we are used to it,” said Figenbaum. We too are used to punitive motoring taxes, but in Norway they really take the biscuit.

In some comparisons, the prices you’ll pay for a car are relatively similar. For instance, a BMW 330i xDrive saloon costs Kr578,500 (€56,811). Around 50 per cent of that price can be made up of tax, not an unfamiliar situation for an Irish buyer, so perhaps it’s no surprise that the price tag for a similar BMW 330i (albeit without the xDrive four-wheel drive) here is €54,535.

The gulf between conventional and electric becomes even more apparent when you look at the Volkswagen Golf lineup. In Ireland, the cheapest Golf costs you €24,850, while the all-electric e-Golf, inclusive of Government incentives, will set you back €32,250. Look at the same two cars in a Norwegian showroom and the positions are almost entirely reversed. The e-Golf will cost you €28,456 - not so far from the Irish price - but the conventional basic petrol model will now cost you €38,727, or the equivalent in Kroner.

This sort of extra taxation on conventional cars, says Figenbaum, is potentially the way forward. If you want to put big incentives in place to buy electric cars, you need a stick to go with the carrot. “What they do in Sweden is to have a bonus/malus system, where the malus is a tax on gasoline cars, which is collected and then handed out as a bonus to those who buy a battery electric car. So if the bonus were to be €10,000 - this is just an example - and you have 10 per cent sales of battery electric cars, then you already have the funds available to provide the incentives. So such a system has the advantage of being independent from the year-to-year budget, because it is much more stable. In a way the gasoline car buyers pay for the incentives to the electric vehicle buyers,” said Figenbaum.

Lockdown was hard, but it kept us closer to each other than we’ve ever been
10