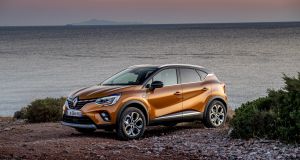 If you’ve been paying attention over the past few years, then it can’t have escaped your notice that SUVs have essentially taken over the entire car market. What started in the family saloon segment has decimated the likes of the Mondeo and Insignia and is now spreading fast to the family hatchback segment.

While the very-definitely hatchback-shaped Toyota Corolla is currently Ireland’s best-selling car, the fact is that the rest of the best-sellers’ list is now dominated by SUVs and crossovers. Even the once firm-favourite five-door hatchback is wilting under the assault of taller, faux-4x4 vehicles.

The king of this segment, at least until very recently, was the Renault Captur. Slightly more than 10,000 of them have found Irish homes since it was launched in 2013, and that is a fact that has caught Renault itself a little off-guard. You see, the Captur was originally supposed to have been an adjunct to the Clio - after all, it was based on the same chassis as the small hatch, and borrowed much of its cheap-and-cheerful interior. The thing is, though, that Captur buyers don’t seem to upgrading from Clios, they seem to be downgrading from Meganes. Which means that they have rather higher expectations of things like space and cabin quality, and that meant that Renault had to work hard on these areas for this, the new Captur.

Renault clearly did not work very hard on the styling. Put a new Captur and an old Captur side-by-side and you’d seriously struggle to tell them apart. The new one is a little longer (by 110mm) and has new, very slim, c-shaped brake lights at the back, but from the front the differences are minimal. From the side, there honestly don’t seem to be any differences at all (the c-pillar treatment is new, but that’s about it). Clearly, Renault reckons that what its 10,000 Captur buyers want is more of the same, but slightly better.

Well, that’s what they’re getting. The outgoing Captur was a decent enough car, at least by the un-lofty standards of the small crossover class (a standard that was once so bad as to be risible, but which has improved a bit of late). It was good looking, OK to drive, not too bad from a spaciousness point of view. All it really lacked was a high-quality cabin.

Well, that’s job one done, anyway. In lifting wholesale from the rather impressive new Clio, the Captur’s interior complaints have been (mostly) fixed in a trice. The new interior looks glossy (a little too much so - there’s a metallic finish for some of the panels that looks downright odd) and seems to be made of very nice things indeed. Our test cars had clearly been covered in glue and driven through the options list - all had fully digital instrument panels, and a large, portrait-oriented touchscreen in the centre of the dash, measuring 9.3-inches across. Equally, all had leather trim on the rather impressively comfortable seats.

Standard versions will be rather more prosaic, and value-hungry Irish buyers will probably only rarely encounter a fully-specced Captur. Most cars that will be sold here will have analogue dials and a much smaller, seven-inch infotainment screen. We were, briefly, allowed to sit in a car specced thusly - it was fine, to be honest, but certainly lacked the star quality of the more highly-specced models. However, there’s a danger that the cabin quality could be merely skin deep. We couldn’t help but notice that the centre console on both of our test cars seemed rather loosely screwed down, and other reported rattles from various points within the cabin. Ask us again in a year, when second hand models start to trickle onto the market…

Space is decent, though. There’s adequate legroom in the back for six-footers, although the very tall will find their bouffant brushing the headlining. The boot expands, thanks to the fact that the rear bench seat slides forward by as much as 160mm. Do that and you’ve got 530-litres to play with (or 422-litres with the seat all the way back) so there’s a decent level of practicality, here - certainly far better than would have been the case for a car in this class in previous years.

What’s it like to drive? Pretty much entirely as you’d expect. Which is to say not exactly inspiring, but a little better than you might think. The steering has a pleasantly meaty weight to it, so it feels quite good as you tip into a corner or series thereof. The ride quality is rather too firm on the optional 18-inch wheels of our test cars, but from what we can tell, it should be a little better on the smaller wheels of lower-spec models. It’s not an exciting car to drive, not thrilling in any sense, but it’s tidy, reasonably precise, safe, and undemanding, Which is pretty much exactly what its customers will want.

It will be very safe, actually. Standard kit across the range includes emergency autonomous braking with pedestrian and cyclist detection, and a speed limiter. Safety options include lane-centring steering, active cruise control, blind spot monitor, surround-view cameras and much more. Renault has frequently been among the best performers when it comes to the EuroNCAP safety test, and the Captur is unlikely to change that.

Somewhat against expectations, though, diesel power is likely to dominate new Captur sales in Ireland. The 95hp 1.5 dCi engine is predicted to account for 56 per cent of all sales in 2020. Why? Well, oddly and almost oxymoronically, it’s because of the new diesel NOX emissions tax. Jeremy Warnock, told The Irish Times that: “The NOX tax seems to have taken the gut reaction out of diesel. It’s put a value on the emissions, and now customers can easily see how clean the latest generation of diesels really is. Plus, the price between the petrol and diesel models will narrow a little, so it’s an easier walk-up for buyers.”

That was presumably not what the Government had intended with the new NOX tax, although if an engine’s clean enough to sidestep it, perhaps credit is due. Other options will include a 1.0-litre, three-cylinder petrol turbo engine. This and the 1.5 diesel will account for almost all Irish Captur sales, so of course Renault gave us only the new 1.3-litre turbo petrol engine to test out on the launch event. For what it’s worth, it’s not a bad engine but it does feel a little inconsistent in its throttle response, and the 155hp version feels surprisingly slow for a car with that power output. Not that it makes much of a difference in an Irish context…

Perhaps of more interest will be the plugin-hybrid E-Tech version that will arrive next year. That will have Co2 emissions of less than 40g/km, but alas its electric-only range tops out at 45km, so it won’t be eligible for the VRT rebate on plugin-hybrid vehicles. Will that kill off its chances?

Maybe so, but with all those profit-heavy diesel models flying out the door, you probably won’t hear anyone from Renault complain. The new Captur is much like the old one, but a little better, so expect similarly enthusiastic purchases starting next February from those who have bored of their hatchback life.

Our verdict: Pretty good as small crossovers go. Does it spell the death of the Megane?

Takeaway kebab at home: this chicken shish is delish
7