First drive: Even in its hottest guise, powering down the autobahn at 200km/h, this BMW is polarising and inspiring 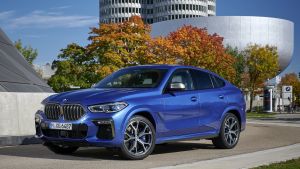 The new X6 has a slightly updated shape with a solid stance thanks to its broader shoulder line. It is slightly longer and wider than before but the roofline is lowered thanks to an increased slope to the windscreen’s A-pillar.

To say the US built BMW X6 is a niche model is an understatement, with just four sold in Ireland in the last two years.

In the first eight months of 2019 the X6 made up circa 44 per cent of all X models sold. Generally, BMW customers have no hesitation in buying odd number X models like the X5, X3 and X1 but have issues with the even numbered cars that are less SUV-like. No matter how good on paper the X2, X4 and X6 are, their oddball styling is less loved.

The X6 when first launched in 2008 was an easy target for critics as it reeked of conspicuous consumption. Many people billed the X6 as the car no one was asking for.

Yet those who actually got behind the wheel always came away with a better understanding of the car’s place in the world. The big sports activity coupe or SAC as BMW christened it, a new class of car, is the metal equivalent of a prop forward in runners. The X6 was sportier than an X5 and more entertaining to drive.

Now the third generation X6 is due in Ireland at the end of 2019 and we’ve taken to a variety of Bavarian roads in the new car to find out more. Our range topping M50i X6 is one of BMW performance M models, these sit above the mundane and below the extraordinary M cars. Power would not be an issue with a V8 petrol motor under the restyled bonnet.

The new X6 has a slightly updated shape with a solid stance thanks to its broader shoulder line. It is slightly longer and wider than before but the roofline is lowered thanks to an increased slope to the windscreen’s A-pillar. This doesn’t impact on inter

ior headroom, it actually increases thanks to the redesign and lower set seats.

A BMW first is the optional – and dare I say essential – ‘iconic glow’ illuminated grille that dominates the car’s face. The large kidney grille’s back lighting can be switch off or on to let the world know the type of driver, sorry, the type of car you’re driving. It reality it is a nice automotive folly.

New doors, adaptive LED headlights (Laserlight optional), air breathers and other aerodynamic features accent the muscular bodywork. The rear end gets the most radical overhaul with a new tailgate incorporating elongated L shaped lights. A roof spoiler is new and a boot gurney trim adds to the aero package. The X6 will have xLine and M Sport models that will feature alloys from 19 inch up to 22 inch with plenty of optional customisation available.

The five seater’s interior features some excellent digital displays, a new console and door panels. It is more spacious up front with improved shoulder room and occupant separation that creates an airy ambiance suited to four adults. The dash reflects its X5 origins.

Heated cup holders are a nice option as is the new panoramic roof, both taken from the X5. The huge roof features nice ambient lighting and is almost double the size of the old car’s. The boot holds a useful 580 litres and is expandable to 1,525 litres with the back seats down.

Connectivity features the latest BMW intelligent personal assistant system. By saying ‘Hey BMW’ or a name of your choosing, X6’s voice recognition will allow you can ask “where is the nearest coffee shop or five star hotel?” It can also carry out a number of functions beyond retrieving or generating simple navigation. Advanced driving assistance systems abound with BMW’s ‘driving assistant professional’ adding a host of them in a bundle. Automated parking and reversing assistant are available also.

Four powerful engines options, all automatics, will initially come in xDrive all wheel drive guise. Launching in Ireland towards the end of the year there will be: two six cylinder diesels (30d and M50d) with 265hp/620nm and 400hp/760nm and two petrols (40i straight six and the M50i V8) with 340hp/450nm and 530hp/750nm respectfully. The slowest version can go from 0-100km/h in an impressive 6.5 seconds.

The M50i is a very brisk car that eats kilometres with ease. A large head up display is very useful as it helps keep your eyes on the road, providing key speed and navigation information especially on sections of unrestricted autobahn.

Cruising in the M50i at 200km/h-plus with the adaptive cruise control and lane keeping assist both on is surprisingly relaxing. The car’s big petrol engine can ease up to 250km/h with very little effort and as it is a M Performance model it gets good brakes too. I spent most of the time in adaptive drive mode but other modes do what they say with comfort the best setting to maximising the air suspensions ability to level out road imperfections.

While the soundtrack has been enhanced the burble of the V8 is glorious and in dynamic mode you can even raise the odd parp or two on downshifts. On most roads the X6 can feel quite small and is easy to place. On smaller roads you will be aware or the X6’s girth.

Initial turn in is good but the chunky steering wheel requires quite an effort even if set to comfort and this is due to the massive wheels and tyres. You can fire the car through tight bends and know your forearms will give up before the X6’s mechanical grip will. With a 0-100km/h time of just 4.3 seconds the M50i X6 is a whole lot of fun. Its ability to cruise and cover ground in comfort is impressive.

Ultimately, this latest iteration will continue where the old one left off: dividing the motoring public. Even BMW says the X6 is both polarising and inspiring.

Verdict: A brisk, indulgent alternative to a blocky SUV