All around the world with Ford’s new compact SUV

With its neat, rugged new EcoSport, Ford is hoping to catch the wave of growth of supermini SUVs 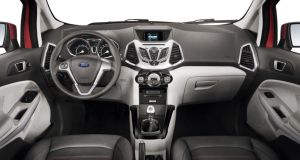 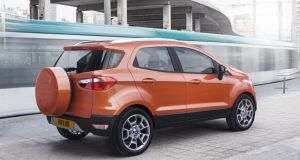 Ever since Ford tried to sell the Mondeo on both sides of the Atlantic in 1993, the US auto giant has harboured ambitions to return to its “world car” roots. The concept harks back to the Model T: one basic design, built and sold all over the world. Under current chief executive Alan Mulally, the concept has successfully resurfaced; now you can buy a more or less identical Fiesta, Focus or Kuga whether you’re in Seattle, Shanghai or Sligo.

That concept of a truly global model has reached something of an apogee with this new EcoSport. The car was more or less entirely conceived and developed in Brazil, where it is the replacement for a best-selling car of the same name. The new model is is built up from components sourced from across the globe (steel from Korea and China, engines from Germany and India, interiors from pretty much everywhere), assembled in an Indian factory and shipped back to the Old World as Ford’s first-ever compact SUV.

Based on the current Fiesta, and benefiting from a rather pleasingly brash American Ford-style design job, the EcoSport (which Ford people insist on pronouncing as “echo-sport”) will arrive on sale in Ireland in April.

If proof were needed of the popularity of this format then look no further than Ford of Europe’s Facebook page. Through it, 500 limited edition models have already sold and it was confidently asserted to us that whatever the factory in Chennai can produce, Ford’s European dealers will find willing buyers to put against.


Neat-looking thing
It’s a neat-looking thing, too, the EcoSport. You may quibble about the old-fashioned idea of the spare wheel hanging on the rear door, but the 1980s child in me likes it and it’s there at the demand of the Brazilian market, so it’s staying.

At least it means you can have a full-size spare wheel with a full-size boot – and the EcoSport’s 375-litre boot means it’s more practical than some rivals. A pity that Ford has decided not to re-tool the side-hinged rear door for right-hand drive, though. It’s hinged at the left and therefore opens the wrong way for us when parked at the kerbside. It’s more rugged, though, for which again you can thank Brazil. Europe won’t get a four-wheel-drive version but the EcoSport’s ramp, departure and breakover angles are more akin to a full-size 4x4, and its 550mm water wading depth beats even that of the Land Rover Defender. It’ll come in handy next time your local river bursts its banks.

Ford of Europe admits that it came late to the EcoSport’s development process, but its influence can be found in a much higher-quality cabin than Indian or Chinese cars get, as well as extra standard safety equipment including ESP and a drivers’ knee airbag. It still scored only a four-star rating on the EuroNCAP crash test, but Ford is batting criticism away by saying that the fifth star was predicated on things such as a rear seatbelt warning chime and a pedestrian detection system. For occupants, the EcoSport certainly seems safe enough.

It’s also very much a classic Ford to drive. The steering has the same syrupy smooth feel of its larger brother the Kuga, and if the 200mm ride height means that you get both stiff suspension and quite a lot of body roll, it does at least feel a bit better damped than the current segment benchmark, the Peugeot 2008. That ride quality could be an issue though: if it feels firm on beautifully laid Spanish tarmac on our test drive, then it could be too stiff back at home.


One price point
Ford will sell the EcoSport at one price point: €23,995 in high-spec Titanium trim. For that money you can choose freely between a 1.5-litre TDCI 90hp diesel, a 125hp 1.0 Ecoboost three-cylinder petrol, or a new 1.5-litre VCT 112hp petrol engine which comes only with an automatic gearbox. Of the three, go for the Ecoboost petrol; it’s lovely to drive, with lots of torque and an engaging rasp from the exhaust. The diesel, although more economical, is a chore to drive, laggy and sluggish when off-boost and distinctly noisy.

There seems to be no issue about Indian build quality either. Our test car, a pre-production model, felt tight and well put-together, although there were some quite uneven panel gaps on the exterior. It’s comfy, too, albeit a little narrow in the beam if two, ahem, husky gentlemen are in the front seats. While we’re talking about India, it’s difficult to justify the relatively high price level. Surely the idea of building a car in a low-cost factory is to then undercut the opposition on price?

Even at that price point, the EcoSport is almost certainly destined for success. Ford reckons that this, the Kuga and the upcoming European version of the new Edge SUV will find it a million new European customers over the next decade. On this evidence, it’s a tough prediction to bet against.

OUR VERDICT
Stylish and surprisingly rugged. Good, if you ignore the spare wheel and side-hinged door, and avoid the diesel version.