Can Skoda storm the SUV market with a 1.0-litre engine? 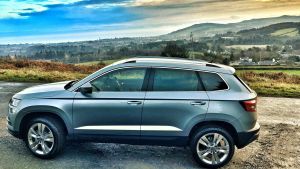 A purse of the lips. A squint of the eye. A beat taken to think and ponder. Then the response: “I think it’ll take a bit of convincing.”

That was the response from Skoda Ireland’s head of marketing, Ray Leddy, when asked whether Irish buyers would really plump for a 1.0-litre petrol engine in its new Karoq SUV. Expanding on his theme, the continued: “We know it’s a great engine, and we can say that in advertising, but people don’t always believe what we say in advertising, so maybe it’s down to the reviews and road tests to convince people?”

Then again, it’s indicative of just how far and fast motoring tastes can change that we were even thinking about the possibility of Irish buyers queuing up for a petrol-engined SUV at all, let alone one with a tiny turbo. Diesel’s fall from grace has been precipitous (albeit it may eventually turn out to be temporary) and that has driven buyers back to petrol in a big way. Thankfully for us, it’s also coincided with a new generation of petrol engines which are far more frugal than their antecedents.

Equally indicative of rapid change is the fact that not only were we discussing SUVs as being the favoured car of the Irish car buyer (the Hyundai Tucson and Nissan Qashqai were in first and second place in the sales charts at the time of writing) but that Skoda could conceivably challenge for the top spot.

After all, this Karoq’s direct predecessor, the Yeti, was a terrific car but one aptly described by Leddy as “Marmite – you either loved it or hated it.”

Certainly the Yeti’s slightly quirky styling kept buyers away, which was a shame for what was a very impressive car.

There’s little danger of that with the Karoq (the name is taken from the language of a tribe of native Alaskans, called the Alutiiq, and it means ‘car’ to them –- they come from Kodiak Island, and where have we heard that name used in motoring recently?).

Its styling seems to have been taken from a desk drawer marked ‘Generic SUV Shape Type-A’. It draws a lot on its bigger brother, the Kodiaq, for its styling, with a new subtle differences around the grille and lights to keep it separate. The back end is a little more truncated, of course (no seven seat option here) but doubtless many will mistake it for the Kodiaq (and vice-versa) at first glance. Whatever, it’s certainly not going to offend anyone, as did the Yeti.

The interior is arguably a little more successful. Whereas the Kodiaq’s cabin is beautifully made, but rather blocky and upright in its styling, the Karoq’s is a little more sculpted and visually interesting, and seems every bit as hard-wearing.

There’s an especially nice, almost industrial-grade, fabric on the seat centres that looks intriguing and suggests robustness. It probably helped that our test car was a highly-specced Style version, which gets the massive 9.2-inch touchscreen infotainment system (which includes live connected services from Google Maps to weather and parking data – free for the first year and €70p.a. after that) amongst other toys. Mind you, as we shall see in a tic, you don’t need to necessarily splash the cash to get that…

The engine, though? The 1.0-litre TSI turbo three-cylinder petrol is a sweet little engine, and we’ve loved it in the likes of the VW Golf, the Skoda Octavia, the Seat Ibiza, and the Audi A1. Those are, you’ll have noticed, small or small-ish cars though, and this is a big (well, big-ish) SUV. Can 115hp and 200Nm really cope with this?

Well, yes is the rather surprising answer.

Those expecting sluggish straight-line will be disappointed – the 1.0-litre Karoq actually feels decently brisk, as long as you’re prepared to work the gear lever, with its slightly long throw, through its six slots. Okay, so try and accelerate hard from low speeds in a high gear, and you’ll feel frustrated by the lack of instant pickup, but work the cogs and it’s perfectly fine.

It’s also very refined - warbling and trilling with a pleasant note when you press on, settling into a hushed background when cruising on the motorway at 120km/h, something it does with astonishing insouciance for such a small engine. The secret is weight, or lack thereof.

The Karoq is bigger and roomier than the old Yeti, but 13kg lighter depending on the model, and this 1.0-litre version weighs a mere 1,265kg – barely 40kg more than the Octavia hatchback with the same engine. That helps explain the decent fuel consumption. Over a (relatively brief) test route of country roads and motorway, we scored 7.5-litres per 100km, or 37mpg. Not exceptional, but not bad considering we were driving quite briskly.

Not that the Karoq exactly encourages brisk driving. Unlike its close relative, the Seat Ateca, the Karoq is set up to be soft and pliant, not sharp and pointy. It lacks the meaty steering weight of its Spanish cousin, instead having a loose-limbed, light steering feel. The springs too are set to soft, allowing plenty of body roll, but you’ll forgive its heeling over when you realise how smoothly it rides poor road surfaces. It’s actually rather refreshing to find a family car giving sporty settings a swerve, and concentrating on comfort.

As for the price, it’s not quite an outright bargain, but there’s devilish value in the details. Prices start at €27,715 for an Ambition model, which is more than Hyundai asks for a basic Tucson.

Ah, but the Tucson comes with an aged old 1.6-litre petrol engine in base form, and the Karoq is very well equipped – an eight-inch touchscreen, 17-inch alloys, air conditioning and rear parking sensors are all standard.

Our Style test car, which had the bigger touchscreen, 18-inch wheels, parking camera, DAB radio, and keyless entry and ignition, clocked in at €30,915 which doesn’t seem outrageous.

Will you purse your lips and squint a bit when presented with an SUV powered by a mere 1.0-litre engine? Probably. But it’s far, far better than you might think.

Verdict: Blander than the old Yeti, but as smooth to drive as its styling, and with a cracking 1.0-litre engine.