If Elon Musk can send a car to Mars, can I drive a Tesla to Austria?

. . . or will I worry about range anxiety for the entire 1,500kms from Dublin to Innsbruck?

Michael McAleer of the Irish Times test drives the Tesla Model S in Dublin. Can its battery can hold up on Irish roads. Video: Enda O'Dowd 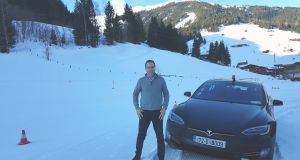 Ian Beatty makes it to snowy Austria in the Tesla

If Elon Musk can send a car to Mars then surely I can drive one of his Teslas from Ireland to Austria without too much complaint. That’s the idea behind this road trip: facing off against the dreaded range anxiety that haunts every electric car purchase.

The trip clocked in on Google Maps at 1,500kms, taking three days and with a tricky sea voyage to navigate as well. The upside of the Irish Sea leg is that it shouldn’t prove a drain on the battery. The downside, Stena Line doesn’t yet have chargers on its ships, so we’ll be parked up for hours without banking any future mileage.

The Tesla Model S is available across three variants (from €91,186), the main one is the 100D, with a 100-kWh battery, which according to the NEDC (New European Driving Cycle) will give a range of 632kms. By my estimate it has a realistic range of 500kms for its Model S, while there are three supercharger stations in the Republic (none of them in Dublin, unfortunately).

So off we went, starting out on a Saturday afternoon from Dublin to Rosslare to board the 16.30 Stena Line ferry to Cherbourg in France. It’s a 16-hour sailing and despite the crew’s courteous efforts to supply a traditional 13-amp socket, we abandoned plans to use the time to charge the car. Stena does plan to install charge points on its ferries, hopefully sooner rather than later for those wishing to take their electric car on summer holidays in Europe.

Undeterred, we disembarked in Cherbourg with a 370km indicated range and our route outlined on the car’s enormous 17-inch touchscreen. The navigation system uses Google’s mapping apps to provide real-time traffic updates but it also identifies the fastest route where supercharger stations will let you quickly recharge the battery. It displays the number of chargers at each location, typically 8-12, and shows how many are in use at any time.

The supercharger stations are strategically placed on the main motorway networks of Europe, so there is no need for backwater detours. The downside, however, is that the options while you wait are largely the usual motorway service station format. Life on the road with a Tesla will involve grazing on a great deal of fast food. And coffee. Buckets and buckets of coffee. Some of it warm, some of it weak, the remainder reminiscent of liquid tar.

The benefit of a supercharger stop is the time it takes to recharge the car. The Tesla app on your phone shows the live status of your car’s charging condition, so you can huddle in the corner of a motorway diner and watch your life tick away on the app. A modern take of Edward Hopper’s Nighthawks will feature a customer struggling to make a coffee last 40 minutes while staring at the Tesla app on a mobile phone.

Use of a supercharger in Ireland costs 24 cent per kWh, 20 cent in France and 34 cent per minute above 60kW in Germany. Model S owners receive 400kWh of supercharger credits annually. Use it wisely.

Our first stop of the day at a supercharger station saw our estimated range at 210km, and we left 30 minutes later with a range of 404km, almost 200km gained in half an hour.

We drove for a further two hours before stopping for lunch and another charge. An hour later we unplugged from the supercharger with a very healthy range of 507km. This was enough for us to reach our destination hotel for the night, the picturesque Château de la Presle in the sleepy setting of Haute-Saóne.

As a Tesla destination hotel, it provides charge points so you can relax in lavish surroundings, safe in the knowledge your car will be ready in the morning. The château owners, although surprised to see their first Irish-registered car check in, were not too amazed to see a Tesla as they too are Model S owners, regularly travelling to Germany and the UK for holidays.

After a hearty breakfast, we set off on Monday morning to drive to Innsbruck, travelling through Switzerland and Liechtenstein, prior to crossing the border into Austria. After a quick stop at a local supermarket to stock up on some French wine, we navigated 603km to reach our hotel, high up in the snowy Austrian alps. The journey took us close to eight hours and apart from our very necessary wine-buying stop, we only had one stop for lunch in Switzerland for 40 minutes.

Thankfully the superchargers in Switzerland are located alongside a decent selection of eateries. We encountered some snow and ice for the final hour of the journey. As it’s mandatory by law at this time of year in Austria, we had winter tyres fitted to our car. These along with Tesla’s all-wheel drive system meant we were going to complete our cross-country journey without fail.

The all-wheel drive is now standard across the Tesla range and although no Irish customer is going to drive their €100,000-plus electric car across a snowy field, it’s reassuring to know that you won’t get into difficulty driving up a slippery motorway exit ramp in the winter. The car has two electric motors, one on each axle so torque can be applied separately on both axles, they can communicate and adjust torque 100 times per second.

The much talked about “range anxiety” thankfully never hit us on our trip. We left Dublin with the intention of driving the Tesla in the same manner we would any petrol or diesel alternative, albeit with longer refuelling stops. In reality we would have taken 30 minutes or so at each stop in any event just to break up the journey and the monotony of motorway driving.

We cruised at 130km/h along the French autoroutes and took advantage of the car’s blistering acceleration at every possible opportunity (within the law). It would have been a pointless exercise to crawl across European countries thinking we should save the batteries or we won’t make it.

We had a simple objective – and we achieved it. The Model S isn’t by any means perfect, affordable or without niggles. However, you can’t fail to be impressed by its attributes. Range will be an issue for those who can’t avail of a supercharger, nearby or en route, but if you have the infrastructure to hand – as is increasingly the case in some European states – then owning a modern electric car need not leave you fearful or anxious, heart palpitating and palms sweaty. The service station coffee might, but your electric car should not.

How to have a happy Halloween, Christmas and St Valentine’s this winter
5

Not bad for a boy from the Oliver Bond flats – or, as William calls it, ‘the jungle’
9