Electric cars may be even cleaner than makers claim 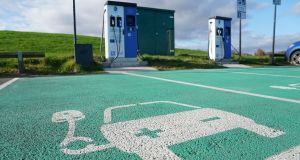 EVs trigger emissions from both the generation of electricity to charge their batteries, and in their manufacture. The question is - how much? Photograph: PA

While we all watch, warily, the countdown to 2030 and the incoming ban on sales of new internal combustion engines (ICE) cars, there is a significant question to ask - just how green is an electric car? It’s a valid question - while electric cars, rather obviously, are emissions-free at the point of use (excepting the particulate and microplastic emissions from tyres and brakes of course . . .) they trigger emissions from both the generation of electricity to charge their batteries, and in their manufacture. The question is - how much?

Earlier this year, it was suggested that, because an electric vehicle’s (EV’s) emissions were, effectively, front-loaded (in that the bulk of its full-life emissions are caused by its construction, rather than its use) that you would need to drive it for 50,000km before it would be in ‘emissions credit’ versus a conventional diesel car. From then on out, obviously, the electric car would be much, much better for the environment overall.

That perception - of EVs needing time and miles to actually be greener than a ‘normal’ car - was reinforced by a more recent study, commissioned by a group of companies including Honda, Aston Martin, Bosch and McLaren, which apparently found that an electric Polestar 2 (a car made by Volvo’s spinoff electric car division) would emit 24-tonnes of CO2 over its life, compared to 14-tonnes for an equivalent petrol-engine Volvo XC40. The report suggested that the necessary mileage for the EV to be cleaner was much higher again - 77,000km or thereabouts.

The report had even garnered a foreword from a serving UK MP, Matt Western, the Labour Member of Parliament for the Gaydon area of Warwickshire (where, possibly not coincidentally, Aston Martin and some elements of Jaguar Land Rover are based), who said: “While a clear and achievable target for ending the sale of petrol and diesel cars is vital for the industry to prepare for a managed transition to a cleaner future, we should not be fooled into thinking this alone will solve the problem. We need to address the decarbonisation of both vehicle and fuel to have any real hope of meeting our CO2 reduction ambitions.”

The report seemed to give a shot in the arm for those who claim that the internal combustion engine still has a viable role to play in the reduction of climate change gases, and that improvements in such technology may render electric cars effectively unviable.

Here in Ireland, the Irish Car Carbon Reduction Alliance (ICCRA) - a group representing some of the major car dealers in the country - has been vocal in its opposition to the 2030 ban on ICE sales. ICCRA’s basic argument, since its inception last year, has been that the Government’s plans to phase out the sales of diesel and petrol vehicles by 2030 is wrong-headed, and based on faulty data.

The group argues that such a move will lead to depressed vehicle sales in the interim, which will actually lead to fewer electric vehicles being sold overall, thereby holing plans to reduce CO2 emissions from cars below the waterline. The ICCRA has previously called for reductions, not hikes, in vehicle registration tax (VRT), saying that making new cars cheaper would encourage people out of older, more polluting models and into new cars, which it claims are up to 28 per cent ‘cleaner’ than older cars.

However, some experts have stepped forward to debunk the claim that you’d need 77,000km on the clock to make sure that your EV is ‘greener’ than a conventional car. Auke Hoekstra is the director of the NEON research centre at the University of Eindhoven in the Netherlands, and has become known as “the great debunker” when it comes to wild claims about emissions.

Responding to the most recent report, he said: “There were no ‘researchers’ involved in this ‘study’ as far as I can see and there are no original ‘recorded results’. It looks like some lobbyists and a PR firm produced a brochure for their list of sponsors: a who’s who of anti-EV organisations. The report underestimates combustion engine emissions by 50 per cent by substituting reality with laboratory tests and forgetting fuel production.

“Even the new WLTP (worldwide harmonised light vehicle tests procedure) test is still 20 per cent lower than reality. And then you have to account for fuel production which adds 25-30 per cent to combustion engine emissions. The ‘study’ copies a study of one car and generalises this to all electric vehicles by boldly claiming it takes 78,000 km before an electric vehicle emits less CO2.” The final figure, the mileage you’ll have to cover to put an EV into credit versus a petrol or diesel car is, according to Hoekstra’s calculations, closer to 25,000km - or about two years’ mileage for an average driver in Ireland.

Hoekstra then went on to debunk claims also made in the report about the potentials for liquid biofuels: “If I use land to produce biofuel instead of food, someone else on this world will convert a patch of nature into land for food. That negates most of my imagined reduction”. He also debunked claims around the much-touted ‘synthetic fuels’ or ‘e-fuels’ which are supposedly carbon-neutral: “eFuels require 5-6x more windmills or solar panels to produce than electric vehicles. It’s a dead end for road transport. Sorry lobbyists”.

Other debunking of the reports was done by Michael Liebreich, a contributor to Bloomberg News and an advisor to the UK department of international trade’s advisory board on overseas investment in infrastructure.

So where does that leave us? Sadly, in spite of the work to debunk the erroneous claims, it probably leaves most of us still feeling confused.

Last year, The Irish Times published its 2019 Behaviour & Attitudes Sign of the Times survey, which suggested that there is “a belief among consumers that those bigger issues of global warming, and widespread pollution (notably plastic) “are beyond our agency to change”.The confusion sown by conflicting reports on the efficacy of electric vehicles won’t help with that.

Polestar itself has tried to help, releasing full-life emissions estimates for its vehicles and laying bare the methodology used to arrive at them. “Fragmentation will only lead to confusion. Car manufacturers have to come together and be more transparent,” says Fredrika Klarén, head of sustainability at Polestar. “What we’re saying at Polestar is, as an industry, let’s help consumers make the right choice.”

The right choice, increasingly, is to go for an electric vehicle. While many will rightly criticise the lack of infrastructural development to support EV use, and the still-high prices of many electric models, the fact is that we need to switch to batteries if motoring is to approach any kind of sustainability.