Plug-in hybrid power is only a baby step on the EV road, but it’s a good one 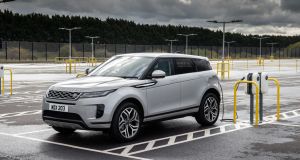 For a company that gets a fair bit of kicking from environmental activists, Land Rover is actually doing better than you might think on the carbon-emissions front.

In fact in spite of selling nothing but weighty 4x4s the company is closer to hitting its EU-mandated average emissions limit than you might think (doubtless being allied to Jaguar, with its all-electric I-Pace, helps). Indeed even the finger-wagging types at eco think-tank Transport and Environment say that the company should “cross the line either through its compliance strategies of selling more plug-in vehicles, by pooling emissions with other companies, or both”.

Well, a big part of that strategy is plug-ins, and while there are already plug-in hybrid versions of the big Range Rover and Range Rover Sport on sale, fitting a similar system to the big-selling (but physically small) Range Rover Evoque is something of a no-brainer in the emissions sense. Land Rover sells more of these (and the mechanically-related Discovery Sport) than any of its other models, so those sales will make a much bigger dent in it corporate average.

Does emissions strategy beget a good vehicle, though? Is corporate necessity quite so nurturing a mother of invention? Well, Land Rover hasn’t done things by halves with this, the Evoque P300e model.

It has created an all-new 1.5-litre petrol three-cylinder engine for this plug-in hybrid. It’s based on the existing “Ingenium” 2.0-litre four-cylinder petrol units, found elsewhere in the range, but lopping off a cylinder has saved a significant 37kg of weight – crucial when you’re also trying to package a battery and an electric motor.

There is also some low-friction cylinder trickery, and a variable-vane turbo that keeps the power output up to a healthy 200hp. Added to that is a 80kW electric motor which, combined, brings the Evoque’s power up to 309hp with a very stumpy 540Nm of torque.

Further weight is saved by the deletion of the propshaft and gearbox transfer casing because the Evoque P300e gets an electrically-driven rear axle (called ERAD in tech-speak), so the electric motor actually lives between the rear wheels. The 15kWh battery pack is stashed under the rear seats. The impact on the Evoque’s practicality is minimal – there’s still a healthy 591-litre boot behind the rear seats.

There is literally no impact at all on the exterior styling, while in the cabin the styling is, as it has always been, very minimalist and pared back, but the overall quality has palpably improved with this generation, although sadly the Evoque has not yet received the impressive new Pivi Pro (good system, awful name) infotainment setup.

The silence and the distant whirr of the low-speed pedestrian warning seems to suit the car, although it does reveal some odd cabin noises that we guess were being disguised by the old, traditional, diesels. Several times on our journey we noticed a swirling liquid sound coming apparently from the air conditioning system.

Still, the engine sounds good once you wake it up. Which you will need to: this Evoque clearly needs both sourced of power – petrol and electrons – turning and burning to provide decent thrust. The Evoque is noticeably sleepy when relying on just one or the other.

And so to fuel economy. Judging such things with plug-ins is notoriously difficult because much of it will be down to how you use it. Keep the car plugged in, and maximise the claimed 55km electric range, and the Evoque P300e could be hilariously – by Range Rover standards – economical.

All we can do is tell you what we managed in our relatively short test drive, which – starting with a full battery and running in hybrid mode for most of the time – was a slightly disappointing 47mpg, or 6.0-litres per 100km.

With its low, low emissions figure (as little as 44g/km, depending on spec) and the incoming new VRT and motor tax regime, I think it’s unquestionable that this P300e will rapidly become the best-selling Evoque, and likely therefore the best-selling Land Rover model. That’s probably deserved.

Verdict: Likeable and engaging plugin-hybrid, the effectiveness of which will depend very much on how you drive it

*Motor tax cost will change to €140 per annum in January