You want sports-car speed with forest-trail traction? You can have it 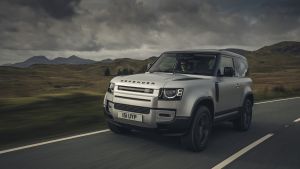 This short-wheelbase model is, surely, the Defender as she is meant to be spoken.

If it looks right, it is right. Right? Well, if it truly is the case that function can follow form as easily as the reverse, then the Land Rover Defender 90 has already covered all of its bases. While we’ve already driven and liked the bigger, longer, more accommodating Defender 110, this short-wheelbase model is, surely, the Defender as she is meant to be spoken.

The 90 badge comes, as does the 110, from Land Rovers of yore – specifically the 90 and 110 models of 1983, which would later be badged as Defender. Back then, the numbers were drawn from the length of the wheelbase in inches. Nowadays, they’re an affectation (or just Land Rover’s marketing people didn’t much fancy trying to flog cars called Defender 101 and 118), a badge that carries a little historical heft.

The Defender 90 just looks right, though. The loss of 400 odd millimetres from the wheelbase has accentuated its naturally boxy lines and given the silhouette, especially when seen perfectly from side-on, much more of a flavour of the original Defender.

Thankfully, Land Rover has resisted giving its new 4x4 (don’t call it an SUV because it’s really not) some of the old Defenders’ other characteristics. The heater, for example, now heats the whole cabin and not just your left leg. The handbrake no longer digs a deep furrow into the same overheated leg, and you no longer need to wind the driver’s window down to give you the necessary elbow space to execute a sharp left turn. We used to think that such foibles were charming – now we realise they were actually just foibles. The new Defender is as slick and as long-range comfortable as a fully-specced Range Rover.

Mind you, that doesn’t mean that you should spec it like one. The first Defender 90 we were thrown the keys to had been, apparently, covered in superglue and driven through the spec sheet. A top-of-the-range Defender X model, it had two-tone paint (a bronze called gondwana stone with a black contrast roof and bonnet), 20-inch alloy wheels, privacy glass, a black and orange leather interior, a Meridian sound system and split-zone climate control.

I’m not sure I would bother with much, if any, of that were it my own car. A fully-specced Defender X such as this makes for a nice showroom pony, but it’s a bit too bling for me. One option well worth having, though, is the extra jump seat in the front. Fold this down and it’s a broad armrest for front-seat passengers. Flip it upright and it turns the Defender into a six-seater (albeit that centre-seat passenger will need to be slim-hipped and on more than nodding terms with the people to either side).

It certainly brings a welcome dose of extra practicality because out the back the Defender 90 is . . . how can we put this . . . lacking. Instead of the wide-open prairie that is the boot of the 110, the 90 has a 367-litre suburban back yard. At least the back seats are more or less as roomy as those in the bigger Defender but you do need to be a little gymnastics-capable to get yourself back there. Kids will love it, though.

On the engine front, both of the Defender 90s we tested had petrol engines, which probably makes them instantly unsellable in Ireland. Which would be a shame.

The P400 engine in the Defender X is a new straight-six three-litre unit, with a 48-volt mild hybrid system that powers an electric turbocharger, which works in concert with the larger, conventional turbo to help this Defender develop 400hp, 550Nm of torque and hit 100km/h in six seconds. Think about that – this brick shi . . . erm, outhouse of a car can hit the legal limit faster than a Golf GTI. It also hit an indicated 200km/h on Land Rover’s own test track in our hands, right before turning sharp left and jumping like a rally car on stilts over a slippery gravel track course.

Fun. Big fun. But perhaps not really what the Defender is all about. It was a relief then to get to Eastnor Castle, set into the Malvern Hills in Gloucestershire in a manner that would have picture postcard manufacturers thinking it was all too gorgeous to be true (this test occurred before the current Level 5 lockdown, before anyone gets an attack of the vapours). Eastnor has been Land Rover’s testing site and playground since the 1960s, and its forest trails and muddy slopes are where every model since then has been honed and proven.

This time, we were in a much more affordable Defender. Shorn of the X’s bling, its air suspension and its fancy paint job, the plain ‘Indus Silver’ Defender 90 SE looks better still. Like a perfectly-made Victoria sponge cake, compared to a sugar-covered concoction that’s gone too heavy on the glitter. Best of all, from the options list, Land Rover had ticked the box for the retracting, full-length canvas roof which is just a delightful addition and almost, but not quite, makes the Defender a convertible.

This time around, power – 300hp and 400Nm of torque – is coming from a simpler 2.0-litre four-cylinder turbo petrol engine, which again won’t be many people’s cup of tea (hello 260g/km of CO2). But, for what it’s worth, it seems to suit the Defender rather nicely.

This time, instead of Land Rover’s wide-open Gaydon test track, we’d be tackling Eastnor’s Hospital Woods (named after the hospital from the first World War that once stood there) and Clencher’s Wood (named after we don’t want to know what). Land Rover had actually opened up some of its most difficult and rarely-used tracks for the day, including the infamous Camel Steps.

These – a series of muddy, slippery descents through Clencher’s Wood – were once used to weed out the weak candidates for Land Rover’s old cross-continent Camel Trophy off-roading expeditions. Conditions – dry and sunny but following a steady week of rain – meant that traction was mostly absent and the mud, looking more like unset concrete, was deep enough to reach above the tyres.

All but needless to say, the Defender felt like it was born to tackle the terrain (well, it pretty much was). Only at one point of the Camel Steps did we have to back up and have another run and, in spite of foolishly deciding to wear brogues and jeans rather than wellies and waders, we came through with the car spectacularly splattered, but not a drop on ourselves (although Land Rover’s people did advise us to close the roof, which was a good call).

So, what did we learn from all this? Well, we learned that a short-wheelbase Defender can tackle some of the most sticky, slippy and slimy terrain you can imagine. Not much of a surprise. We also learned that, suitably equipped, it can hit and hold big-number autobahn speeds with imperious ease. Surprising but perhaps not hugely useful. We did learn, though, that arguably the Defender has the broadest spread of capabilities of any single car currently on sale. You want sports-car speed? You can have it. With forest-trail traction? That too. Not many other cars, if any, could have tackled both those environments with equal ease, and for those worried about the environment, a plug-in hybrid Defender is on the way shortly.

Oh, we did learn something useful though – the Defender 90, for all its lack of boot space, is the proper, true Defender. And the only options you really need are the jump seat and the canvas roof. Proper consumer journalism, there. You’re welcome.

Power: 2.0-litre turbo petrol four-cylinder putting out 300hp and 400Nm of torque with an eight-speed automatic transmission and four-wheel drive

Verdict: Not really a car at all, and certainly not an SUV, but a devastatingly effective all-terrain device.