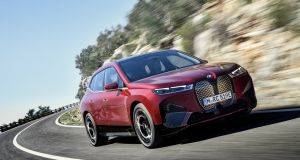 Camera technology, radar functions and other sensors are integrated into the grille - which BMW now calls an ‘intelligence panel’

Having been called the iNext since its – somewhat controversial – concept version was first shown in 2018. That concept was one of the first BMW’s to feature the rather jarring upright, narrow, twin-kidney grille styling that has also now been seen on the new 4 Series Coupe and the upcoming M3 performance car.

The iX, as it has now been renamed, looks possibly a little less controversial, partly because of course we’ve had time to become accustomed to BMW’s new grille arrangement. It’s still definitely rather, shall we say, impactful at the front with the tall, narrow grilles, the slimmest LED headlights yet fitted to a BMW production model, and a heavily castellated bonnet that could almost have come from a Range Rover.

Actually, behind the imposing front end, the iX (which is roughly the size of an X5, but with the low roofline of an X6) looks rather more conventional, maybe even a little disappointing. The concept iNext had a much cleaner, more shuttle-craft-like look, whereas the iX follows the expected lines of a large luxury SUV rather more.

There are some neat details, though. Bereft of the need for a cooling radiator grille, BMW has instead turned that verticalised proboscis at the front into a panel in which all of the sensors and instrumentation for so-called autonomous driving can be clustered.

According to BMW i Design boss Kai Langer who led the iNext and iX design, the controversial grille is a signature feature of the new look for its cars, but also the home for a host of new tech: camera technology, radar functions and other sensors are integrated into the grille – which BMW now calls an “intelligence panel”.

“The kidney [grille] is the most controversial thing but I like it,” Langer tells The Irish Times. “I’m 17 years at BMW and I’ve never done a car without the kidneys being the main talking point, even at times when we did it more conventionally.

“On the iX there is serious rocket science behind the kidney and actually I really like it because it gives the kidney a real meaning. In the past it was needed because the combustion engines needed the air, but now its meaning is due to all the high-tech sensors and elements that are coming into the car behind this protection shield.” He refers to this as a “past icon transported into the future”.

Elsewhere, there are neat little inset door handles, into which you simply press a finger to unlatch the doors, and the BMW badge at the front pops open to reveal a filler for the windscreen washers – theoretically the only maintenance point that an owner will ever need to access.

Inside, BMW has taken rather more of a departure, and it takes a strong cue from the little i3 electric car. The instrumentation and infotainment have been combined into one, sweeping, curved, screen. Langer says they want to offer something to all the occupants of the car, but retain some of the driver-orientated dash approach that is synonymous with the brand’s cars in the past.

Tucking away many of the car’s functions into discreet digital displays is called shy technology by BMW, and seems to take inspiration from surveys that show many high-earning owners don’t want endless screens and up-front functions in their cars, but rather want their vehicle interior to be a place of relaxation and refuge, away from the responsibilities of their office.

“The BMW iX shows how we can give new technologies a very modern and emotionally engaging design. The car is technologically highly complex, but it feels very clear and uncomplicated,” said Adrian van Hooydonk, head of BMW’s design department. “The BMW iX offers a mobile living space in which people will feel at ease and the car’s intelligence is always available without becoming obtrusive.”

As to the future direction of automotive interiors, Langer talks about the potential of marrying the current wave of touchscreens with the regular glass in a car, such as the side windows and windscreen. “We have ideas of merging different things in the car, but it’s very, very hard and for a lot of these concepts we don’t have legal or governmental regulations yet, because they are so new it’s still not clear if it would be allowed,” he said.

In terms of structure, the iX – which BMW insists is an SAV (Sports Activity Vehicle) rather than an SUV – uses a mixture of and aluminium spaceframe around a carbon-fibre core, a technique that was pioneered by the i3 electric car.

That makes it, net of its batteries, quite light for a vehicle of this size, and is possibly how BMW is able to claim such impressive range and performance figures.

Much of the structure underneath is the same CLAR platform that underpins the likes of the 3 Series and 5 Series, and BMW says that the platform has been designed for both combustion and electric power.

Other carmakers have claimed that BMW is behind the curve in not developing bespoke electric car platforms, but Munich counters that by saying that doing so would extend development times and needlessly increase costs.

That range will, says BMW, be “in excess of 600km” according to the WLTP test procedure, with a 0-100km/h time of less than five seconds. The iX’s battery can also be charged at a speed of up to 200kW from a rapid charger, filling it from 10-to-80 per cent in less than 40 minutes, depending on the output of the charger.

In fact, connect it to the fastest 350kW chargers, and BMW says you’ll add 120km of extra range in just 10 minutes. BMW also claims that the batteries for the car are made using only renewable energy, thereby reducing the iX’s carbon footprint before it’s even left the factory.

It uses what BMW calls its “fifth-generation” electric motors (one for each axle) which are said to be smaller, and require less cooling than before, and which are claimed to use no rare Earth metals, thereby reducing the car’s dependency on heavy mining activity – critical if it’s to achieve lower total life emissions.

Really, the iX is a long-overdue expansion of BMW’s i-range, which launched way back in 2013 with that first-generation i3. The iX will be joined by a new i4 four-door coupe, which will share its “fifth-generation” electric motor architecture, but which will be much lower and sleeker, obviously (albeit still with the big grille).

Speaking at the iX’s launch, BMW’s chairman, Oliver Zipse, said: “The BMW Group is constantly striving to reinvent itself. That is a central element of our corporate strategy. The BMW iX expresses this approach in an extremely concentrated form.”

We’ll find out how much of a reinvention, and just how concentrated, late next year when the iX begins rolling off BMW’s production lines.