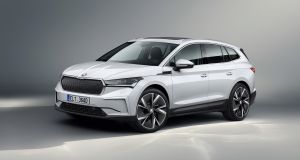 Skoda has confirmed its pricing plan for the new all-electric Enyaq, arriving in showrooms from June next year.

The electric crossover will be offered as Enyaq 60, with a 58kWh battery pack offering a range between charges of 390km, and priced at €46,570 before grants and incentives. It’s estimated that grants of €7,800 would apply to this car, leaving the customer with a price tag of €38,762.

Skoda is cautious to commit to this level of grants as it awaits confirmation from the Sustainable Energy Authority of Ireland (SEAI) that its current €5,000 grant will remain in place next year.

A second long-range version of the new electric Skoda will also be sold in Ireland: the Enyaq 80 with a 77kWh battery pack delivering an official range of 510km and priced at €54,360 before incentives, which are estimated to bring the customer’s final price to €47,922. The four-wheel drive Enyaq 80x will not arrive in Ireland until the end of next year.

All Enyaqs will come with a three-year service and tyre plan, which covers three annual services and one set of replacement tyres during that period. Standard features include 19-inch alloys, front parking sensors, LED headlights, climate control and a 13-inch infotainment system.

New car pricing has become increasingly complex due to the changes to the motor tax regime and the rollout of the new WLTP testing regime.

According to Ray Leddy, head of marketing and product at Skoda, under the new regime, previously minor options have implications on the tax applied and ultimately make it increasingly difficult to communicate pricing for cars. As a result, Skoda is aiming to reduce the complexity of its offerings across its range.

As part of that move, Skoda has opted not to introduce the smallest-battery entry-level Enyaq 50 to the Irish market. Leddy points to the low take-up of entry-level variants of Skoda’s existing range.

The VW Group-owned Czech brand has high hopes for the Enyaq. While only 300 of the crossovers will make it to Ireland next year, there has already been over 900 registered expressions of interest from Irish buyers. And, with the brand’s Kodiaq crossover now the best-selling SUV in its class, Ray Leddy is confident the Enyaq can prove just as successful for the brand once supply increases to the Irish market in 2022.

All 27 Skoda dealers in the Republic will retail the new electric car, the first in a range of electrified offerings coming from the brand in the months ahead.

Skoda is now the fourth biggest brand on the Irish new car market, with a 8.4 per cent market share, with the current Kodiaq crossover winning over buyers from the upper end of the mainstream market and even encroaching into the premium sector. Signs are that Enyaq will follow suit as more motorists turn to electric power.