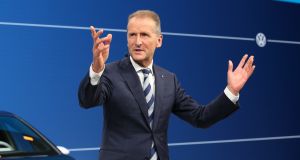 In his annual speech to senior staff, Volkswagen chief executive Herbert Diess also lamented the company’s inability to woo investors as successfully as US rival Tesla, whose market capitalisation is closing in on VW

Volkswagen chief executive Herbert Diess has warned that the world’s largest carmaker will have to “slaughter some sacred cows” and transform itself into a technology company to survive the upheaval in the global auto industry.

Addressing 120 executives in Berlin, Mr Diess lambasted the lack of urgency within VW’s ranks, cautioning that the shift to electric vehicles would require “a radical change of direction.”

Earlier this week a government-sanctioned body found that more than 400,000 jobs would be at risk in Europe’s largest economy, if the country’s carmakers failed to maintain a competitive advantage.

In his annual speech to senior staff, Mr Diess also lamented the company’s inability to woo investors as successfully as US rival Tesla, whose market capitalisation is closing in on VW.

“We are valued like an automobile company, while Tesla is valued like a tech company,” said Mr Diess, who emphasised that software expertise would determine VW’s future success.

Last year, Tesla chief executive Elon Musk rattled the industry by announcing the company would build a factory in Brandenburg, a couple of hundred kilometres away from VW’s headquarters.

The German carmaker has invested more than any other company in developing battery-powered vehicles, but faces a critical year in which it must begin to sell hundreds of thousands of electric cars or risk breaching EU rules, and incurring huge fines from Brussels.

“The storm is just beginning,” Mr Diess told attendees, adding that “the time of classic car manufacturers is over”.

The Bavarian boss also hinted at a further break-up of Volkswagen Group, which currently consists of 12 brands, including Audi, Porsche and Seat. He said VW would restructure its portfolio with a “clear focus on the core business”, and hailed the successful spin-off of truck division Traton last year.

This week, the Wolfsburg-based carmaker reported record sales for 2019, shifting almost 11 million vehicles despite the slowdown in China.

But Mr Diess said a “fundamental rethink” was needed, and urged executives to focus less on volume, and more on profit margins.

“The news would have been even more impressive if we could create a return greater than zero,” he said. “To be perfectly honest: I’d rather have 5,000 deliveries and a return of over 20 per cent.”

Following similar moves from domestic rivals BMW and Daimler, Volkswagen’s chief also announced that the company would “significantly reduce” its investment in MOIA, the company’s app-based shuttle service which had planned to expand from Hannover and Hamburg to London.

“We want to keep our foot in the [sharing economy] business,” Mr Diess said, but “we need the full focus of the company on the breakthrough of electric mobility”.

The manufacturer’s first mass-market emissions-free vehicle, the ID.3, is already rolling off production lines in east Germany, and will go on sale this year. – Copyright The Financial Times Limited 2020